Dirt track racing in the blood of Benton family 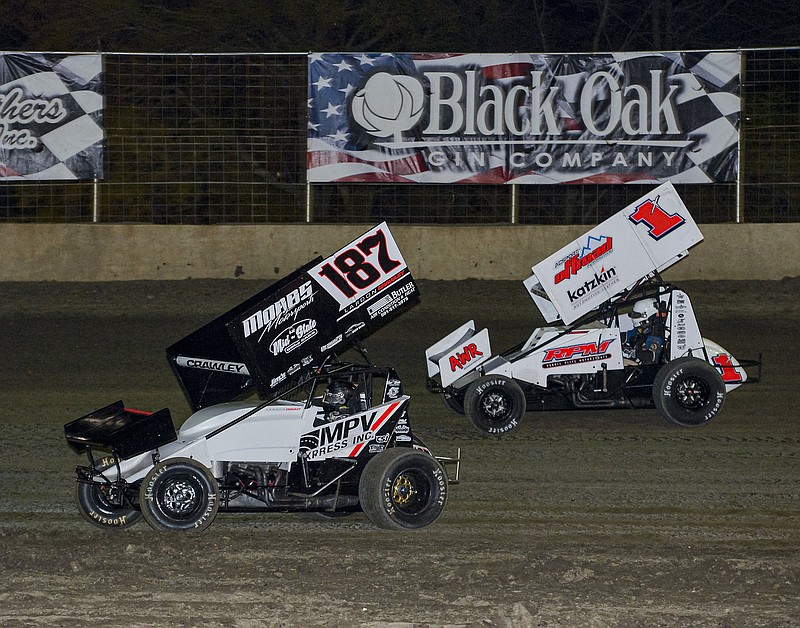 Benton’s Landon Crawley (187) races against his father, Tim Crawley, earlier this season at Riverside International Speedway in West Memphis. Landon, 13, will be competing this weekend in his first Short Track Nationals at I-30 Speedway in Little Rock. (Special to the Democrat-Gazette/Jimmy Jones)

Generations spending weekend nights in the pits at their local tracks for most, traveling to and racing at tracks across the nation for a select few.

Benton’s Tim Crawley has done plenty of both, so he is well aware that he is not the first father to admire his son on the track, racing at any level.

But as one of the most decorated sprint car drivers the region has produced and one who will almost certainly have a plaque hanging some day at the National Sprint Car Hall of Fame in Knoxville, Iowa, Crawley admits watching his young son Landon develop in the sport makes going to track more fun.

Landon Crawley, who is three months shy of his 14th birthday and in his second season racing full-sized sprint cars, will compete for the first time this weekend in the premier event at his family’s home track, the 34th annual Short Track Nationals at Little Rock’s I-30 Speedway.

“I just like racing, going fast, passing people,” Landon said. “My dad works with me and teaches me a lot. But the best part is being out on the track, racing with other guys.” A three-time American Sprint Car Series national champion, Tim continues to be a top-notch driver and will attempt to qualify for a record 24th STN main event this weekend.

But tuning both his car and his son’s, while watching and adjusting to changing track conditions, extra attention is given to safety — all while also making sure to relay all tips and concerns to Landon — Tim admittedly doesn’t always often take time to appreciate watching him on the track.

“A few weeks ago, I was watching Landon,” Tim said, referring to a recent Saturday night at Riverside International Speedway in West Memphis. “He was getting after it, doing a lot [of] slide jobs, going right up against the fence, weaving through traffic. Just watching him, I could tell how far he [has] progressed already.” But Landon wasn’t originally sure racing was what he wanted to do.

“We always have a bunch of toys around here — pit bikes, dirt bikes, four-wheelers, karts, a little track out back,” Tim said. “I would ask him, ‘Do you want to try this?’ He was raised around it, but he didn’t want to do it.” But a weekend trip to Branson with Tim’s older son — which included a good deal of time on the many rental go-kart tracks in the area — changed that.

So Tim built a racing kart, and Landon began competing at age 8.

“He took to it right away,” Tim said. “I started him with a smaller engine, but he sounded like a racer from the start. On the way home that first night, he was all, ‘We need a bigger engine, need to go faster.’ ” From there, Tim put his son on what he says became a two-year program: Two years in karts, two years in a mini-sprints and before moving to full-sized sprints at age 12 — first in the 305 cubic-inch class and now in the 360s.

“We did it in baby steps, we did,” Tim said. “I wanted to make sure as he grew that he fit into the safety equipment, the seats, properly.” Crawley’s wife, Lora — who was also raised in a racing family — has documented her son’s racing career on social media from the beginning. And while she may have been apprehensive, she has accepted each step up in Landon’s career.

“I know Tim is going to take care of him,” she said.

While growing more competitive, Landon has yet to claim his first sprint car victory. However, he came heartbreakingly close in April during an ASCS Mid-South Region event on a rutted track at Jackson Motor Speedway in Byram, Miss.

“It was a real rough track that night, but he had led every lap,” Tim said. “I saw him take the white flag and was actually walking to the four-wheeler so I could take it to go to the front straight and celebrate with him.

“Then I heard the crowd kind of go, ‘Oh!’ I looked around in time to see his wing whirl around. Rough track, a piece on the car had broken and he flipped. They say you have to lose some before you can win, but we were all just devastated.” The sprint car racing community, while competitive, is very tight knit. People throughout the pits have known Tim and Landon all their lives. But Tim said when it comes to racing, he wants his voice to be the one in Landon’s head.

“I don’t really want him listening to others about it,” Crawley said. “I’ve been there, and I know what’s like to have too many opinions thrown at you. I want to help him avoid that.” “Most of the time, it’s just me, Tim and Landon in the truck, going down the highway together to the track,” Lora said. “This is what we do.” Tim and Landon compete against each other most nights now. One of the sport’s inevitability events occurred recently at I-30 when they came together during a race. Their stories on the incident differ.

“I was on the outside of Dad and he didn’t know I was there,” Landon said. “We banged wheels a little and I got knocked off the track.” “We never touched,” Tim said.

What Landon’s future holds remains up in the air. He participated in a test with a midget team earlier this month in Oklahoma. This weekend, both Tim’s and Landon’s cars will carry sponsorship from Coke Zero — a corporate sponsorship that is a rarity in sprint car racing.

Landon designed the livery for both cars.

“That’s kind of a hobby of mine,” he said. “It looks pretty cool.” This weekend, father and son will again race together. Tim will attempt to take his second STN crown — he won the event in 1998. Meanwhile, he said qualifying for the feature race would be a great accomplishment for Landon.

“But he’s young and ambitious,” Crawley said. “He wants to win it. And there’s nothing wrong with that.” 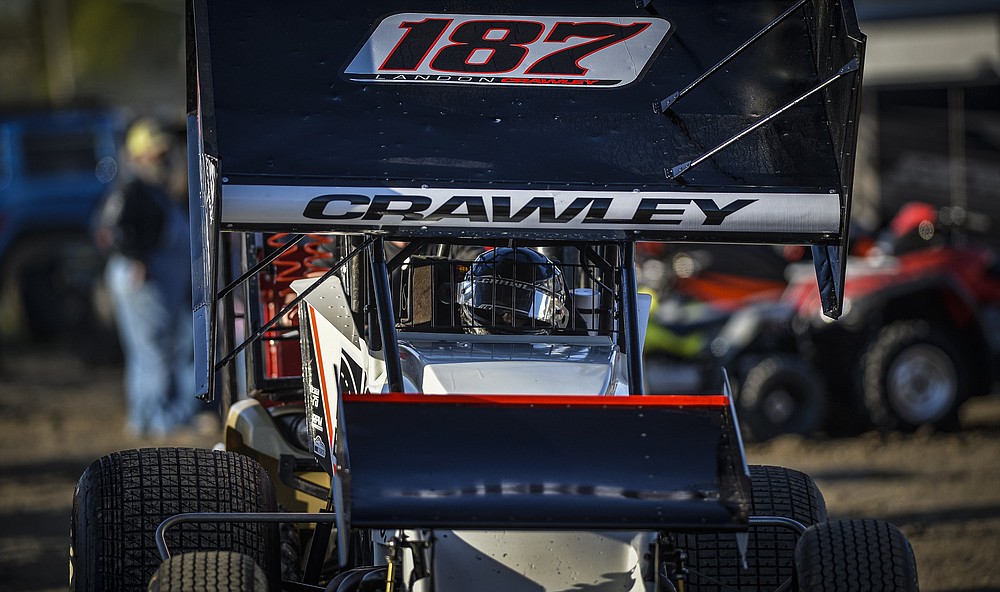 Landon Crawley (above), a 13-year-old sprint car racer from Benton, will compete against his father and many of the nation’s best drivers this weekend during the 34th Short Track Nationals at I-30 Speedway in Little Rock. (Special to the Democrat-Gazette/Jimmy Jones) 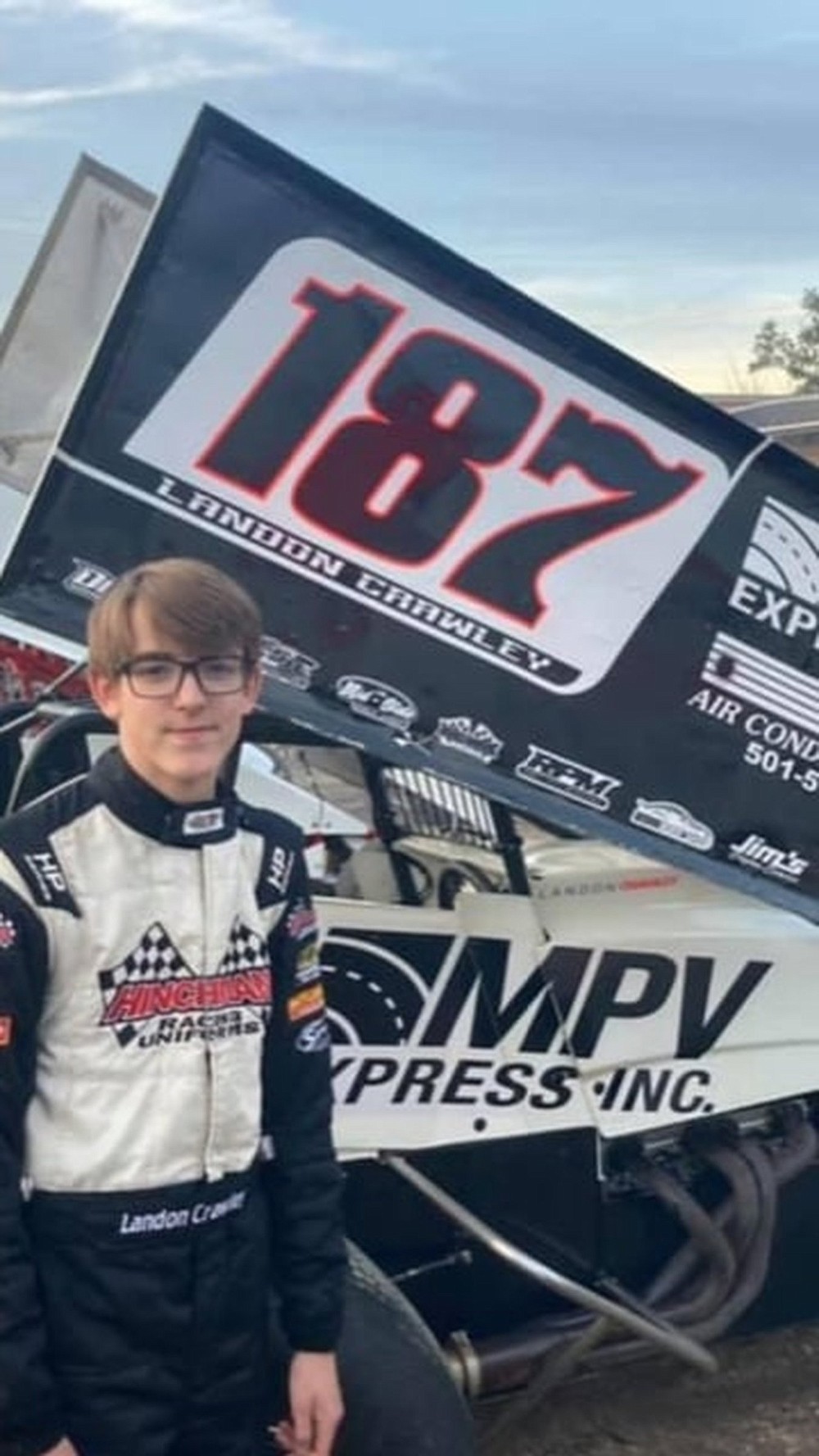