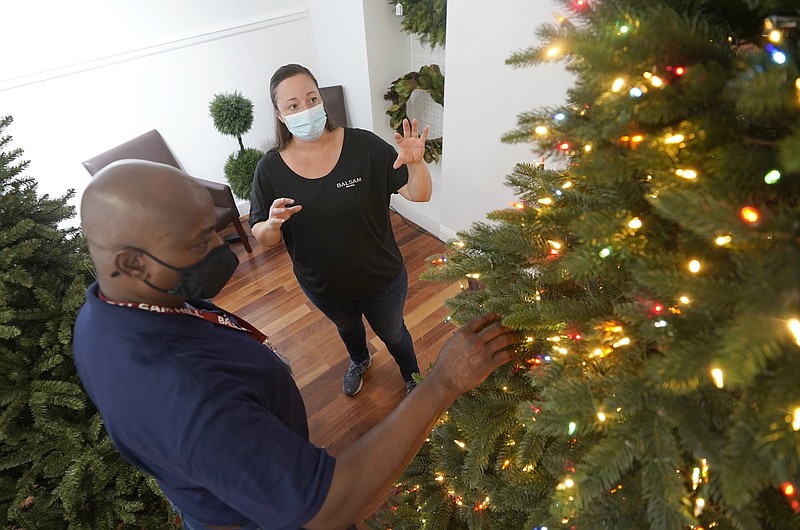 Kelly Bratt, manager at the Balsam Hill Outlet retail Christmas tree shop, works with sales associate Rickey Haynes last month in Allen, Texas. The company said it is working with employees to tailor their schedules based on when they want to work. (AP/L.M. Otero)

NEW YORK -- After struggling to hire workers for its outlet store in Dallas, Balsam Hill finally opened on Sept. 1. But the very next day, the online purveyor of high-end artificial holiday trees was forced to close after four of its five workers quit.

The main gripe for three of them? Working on weekends. So they found jobs elsewhere with better hours.

Balsam Hill reopened weeks later with nine workers, raising the hourly pay by $3 to $18 per hour. But more importantly, it changed its approach: Instead of only focusing on the needs of the business, it's now closely working with each employee to tailor their schedules based on when they want to work.

"We're working against people who have the choice of wherever they want to work," said Kendra Gould, senior retail strategist at Balsam Hill. "Now, it's more about what do you need as an employee and how can we make you happy?"

Companies are confronting demands by hourly workers on terms that often used to be non-negotiable: scheduling. Taking a page from their white-collar peers who are restructuring their workdays to accommodate their lifestyles, hourly workers are similarly seeking flexibility in how -- and when -- they do their jobs. That means pushing back on weekend, late night or holiday shifts.

Job openings are plentiful, so workers can afford to be picky. There were 10.4 million job openings at the end of August and 11.1 million openings the month before, the highest on record since at least December 2000, when the government started recording that figure. At the same time, the Labor Department said that the number of people quitting their jobs jumped to 4.3 million in August from 4 million in July.

Among the new workers Balsam Hill hired was Rickey Haynes, 62, a pastor for a local Baptist church. He retired in July but still preaches in the community. He said he was looking for part-time work in retail, but didn't want to work Sundays because of his preaching. Balsam Hill was willing to work around his schedule.

"They were accommodating," he said. "If I could, I could work with them until I am done."

A recent study from ManpowerGroup revealed that nearly 40% of job candidates worldwide said schedule flexibility is one of their top three factors in career decisions.

The shifting mindset is showing up in data from job site platforms.

SnagAJob.com, an online marketplace for hourly workers, says the word "flexibility" now accounts for roughly 11% of the more than 7 million job postings on its site compared with 8% earlier in the year. But overnight shifts at restaurants have also increased significantly since January.

Instawork, a staffing marketplace that connects local businesses with skilled hourly workers, says the rate at which employers were able to fill weekend shifts dropped significantly from January through August compared with weekday shifts.

Such challenges are happening as companies struggle to hire holiday workers. Target Corp. said this month it will pay $2 an hour more to employees who pick up shifts during peak days of the holiday season, including Saturday and Sunday, as well as on Christmas Eve or on the day after Christmas. That's on top of companies already dangling bonuses and loosening requirements for drug testing and educational minimums that have kept some people out of the workforce.

Sumir Meghani, co-founder and chief executive officer of Instawork, says such perks don't solve the root of the problem.

"It's about flexibility," said Meghani, noting that available shifts on Instawork have surged eightfold from just before the pandemic to August 2021. "It's about workers saying 'I don't want to work weekends' or 'I can't work Mondays, Tuesday and Wednesdays because I don't have child care or schools haven't reopened' or 'I am worried about covid.'"

Meghani says hourly workers are asking how they can get the same work-life balance as their peers who can work remotely.

"The challenge is, if you are a bartender you have to work until 2 a.m.," he says.

Employers of such jobs are limited in what they can do given the nature of how they operate, especially with customers having grown accustomed to getting what they want when they want it.

Radial, which fills online orders for retailers like Dick's Sporting Goods and PetSmart, says it's working to align its schedules with candidate expectations at each location. Increasingly, it's accommodating popular shifts such as Monday through Friday only, or Saturday and Sunday only.

But Sabrina Wnorowski, Radial's vice president of human resources, says it's difficult to address everyone's needs given the unpredictable nature of spending during the holidays.

On the flip side, the working poor have long struggled with erratic work schedules, particularly in the food service and retail sectors, says Daniel Schneider, professor of public policy at the Harvard Kennedy School of Government whose Shift Project focuses on problems of low-income workers.

"The problem isn't new, and we've shown that the consequences for workers and their families are dire," said Schneider, noting day-to-day instability of work schedules is inextricably linked to job instability. That leads to high job turnover for workers, which in turn imposes costs on individuals and on firms.

During the pandemic, hourly workers were hit especially hard when non-essential businesses like department stores and restaurants were forced to close for a few months during the spring of 2020. Those who remained employed at essential businesses like grocery stores found themselves overworked under the crush of shoppers' purchases for basic items.

When demand for dining and shopping rebounded as more people got vaccinated this past spring, businesses couldn't hire workers fast enough. And many of the hourly employees found new jobs as they redefined their priorities. That contributed to a labor shortage, forcing employers to look for ways to make their jobs seem more attractive while also cutting back on hours of operation.