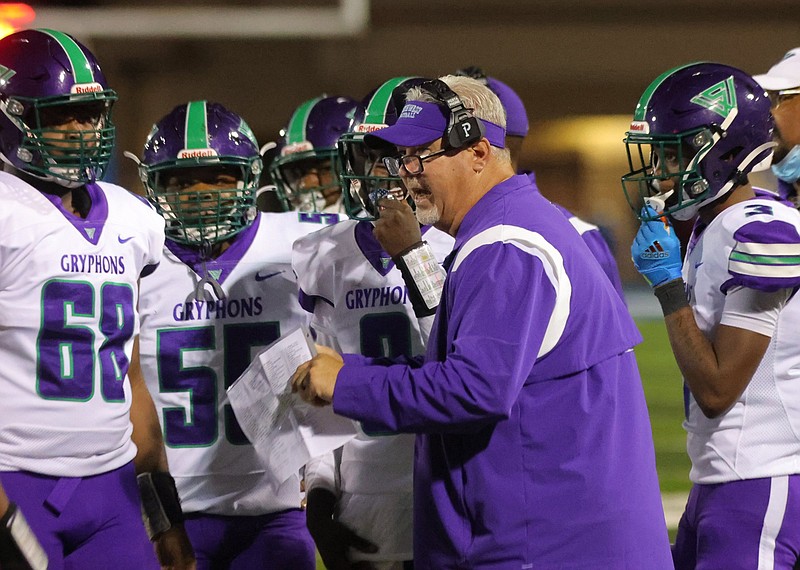 Despite a 1-6 start, Little Rock Southwest Coach Daryl Patton said wins will come for the Gryphons. (Special to the Democrat-Gazette/Stephen B. Thornton)

To say Little Rock Southwest has had a rough go of things since playing its first varsity game last season would be underplaying the struggles the team really has endured.

During a 2020 debut that was dominated by covid-19 postponements and cancellations statewide, the Gryphons went 0-7 and were outscored 283-40, including 155-18 in their four 7A-Central Conference games.

This season, Southwest has been outscored by 300 points (347-47), is 1-6 overall and 0-4 in league play. The team's lone victory came via a forfeit from Little Rock Parkview in a game that the Patriots won 47-0 three weeks beforehand.

In spite of it all, the Gryphons' confidence hasn't wavered, and much of that may revolve around the belief Coach Darryl Patton has instilled. That notion was on full display in the team huddle shortly after Southwest was beaten 48-7 by top-ranked Bryant last week.

There weren't unhappy or saddened faces among the bunch, which may have been surprising for a group that was just mercy-ruled for the sixth time in 2021. Instead, players were offering encouragement to one another and talking amongst themselves and to the coaches about the things that did and didn't go right against the Hornets. There were also moments of extreme positivity, highlighted by Patton's short talk that elicited excitement from nearly every player in that circle.

"These kids give me all they have each time they come out on the field," Patton said afterward. "We're just a really young team, we're a second-year program. Of the 58 kids we brought over here [vs. Bryant], gosh, 39 of them are either sophomores or freshmen, and they just played the No. 1 team in the state.

Despite being overmatched, the Gryphons didn't back down in that 41-point loss on Bryant's homecoming night. There were periods of celebration after either a hard hit or whenever quarterback Josh Brown broke through for a big gain. However, there were also moments where Southwest's youth and inexperience was evident, particularly during a stretch where Bryant needed just 11 plays to score 28 points in the first quarter.

But Patton feels that better days are ahead and blowouts won't be the norm for Southwest, which still has a chance to make it to the postseason. The Gryphons are tied with Little Rock Catholic and Little Rock Central for the sixth and final playoff spot. Southwest will play at Central next week.

"The guys do exactly what we ask them to, and they know that soon, the wins will come," Patton said. "We've got Catholic [Friday], and it's going to be a good game because we're a little bit closer in talent. There's basically three teams fighting for that playoff slot. So we're going to go compete and see what happens.

"But I'm definitely proud of my kids."

Cain White expected big things out of Manila in his first season as head coach even when others didn't.

After coming off a 1-8 campaign last year, Lions were picked to finish last in the 3A-3 Conference by league coaches in the preseason. However, White's team – one that returned a bevy of starters on offense and defense – has bucked those odds by playing some of the program's best football over the past decade.

Manila (6-1, 4-0) has won six games in a row and is locked in a three-way tie for first place with Osceola and Hoxie. The Lions, who'll host Hoxie on Friday, have already won as many games this year as they did in the previous three seasons combined.

"Did we expect to be 6-1, maybe not necessarily," said White, who was the team's offensive coordinator last year. "But we did know we were going to have a successful season. To rattle off six wins in a row and then to play for a potential share of a conference title. ... It's exciting times around here right now, and the kids deserve it."

There has been just one winning season for Manila since 2008 and that occurred in 2015 when the team went 6-5. Ever since that year, they'd won just 13 games total before making a splash this season.

The Lions are averaging just over 33 points and have a standout defense that pitched a 42-point shutout a week ago at Palestine-Wheatley.

"Our defense has played lights out, really all seven weeks," White explained. "We gave up three big plays against Earle, and that was the difference in the game, to go along with the six turnovers we had. We've won the turnover battle in every game since then, and that kind of tells the story.

"Valuing the football, holding on to it, time of possession of battles. All of that's been key, along with the way the guys have faced adversity."

That adversity was thrown out there early when the Lions realized where they were picked in the 3A-3 before the year started.

"We saw that we were picked last in the conference, and we kind of used that," Cain explained. "We didn't harp on it too much, but we go out and play with a chip on our shoulder every week. All of that has helped when we've faced even more adversity.

While Camden Fairview quarterback Martavius Thomas had a career night against De Queen last week, the Arkansas Democrat-Gazette Player of the Week isn't the only Cardinal piling up the numbers on offense.

Including Thomas, Camden Fairview has five different players with 500-plus yards of total offense this season. Three of those players -- senior Brandon Copeland and juniors Jarvis Reed and Aaron Alsobrook -- each have 500-plus receiving yards.

As a team, Camden Fairview has already outscored its offense from a season ago in four fewer games. The Cardinals have found the end zone 51 times in eight games, while they found it 47 times in 12 games a year ago.

The offense is also on pace to outgain its yardage total from 2020. If Camden Fairview totals more than 6 yards on offense against Hope this week, it'll have outgained the 4,061 from a season ago.

"I think the biggest thing is we're a lot more efficient in the things that we're trying to do," Camden Fairview Coach Jake Monden said.

Monden said the Cardinals operate a no-huddle offense that runs with a focus on fast tempo, and that it's not all that different from what Camden Fairview ran a season ago.

The offensive success is largely a result of the Cardinals' personnel this season, Monden said, but it also comes with a new offensive coordinator, as former Blytheville head coach Lance Stone took over OC duties in June.

Stone's hire in early June was a "no-brainer," Monden said, and his transition has been a smooth one. Monden also noted that Stone and assistant coaches Will Houston and Justin Carpenter all have a great deal of input on the offense, and that Houston and Carpenter have done a "great job" of getting on board and working with Stone.

There are five teams – Lavaca, Lincoln, West Fork, Hackett and Cedarville – in the 3A-1 tied for second place with 2-2 records. Charleston, ranked No. 6 in Class 3A, leads the league with a perfect 4-0 mark. ... The winner of Friday's game between Elkins and Class 4A No. 1 Shiloh Christian will take over sole possession of first place in the 4A-1. Both teams are undefeated in conference play. ... Palestine-Wheatley (0-6, 0-4 3A-3) will be looking to score its first points of the season Friday against Corning. The Patriots have forfeited two games (Hoxie and Osceola) and lost by a combined 182-0 to Des Arc, Marked Tree, Walnut Ridge and Manila. ... Strong-Hutting (5-0) is the lone unbeaten team in eight-man football. The Bulldogs, who are scheduled to play Woodlawn on Friday, are coming off a 48-30 victory over Mountain Pine last week.