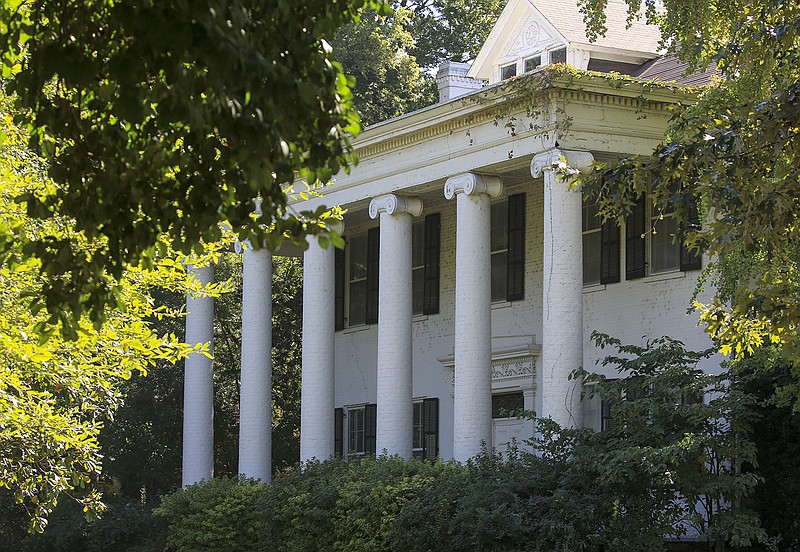 Ownership of one of the oldest homes in Little Rock -- the Pike-Fletcher-Terry House -- should revert to the descendants of the sisters who donated it to the city and the "Arkansas Arts Center" in 1964, according to a lawsuit filed Wednesday in Pulaski County Circuit Court.

And a $1.5 million endowment made around 1985 for maintenance and operations should come with the house, according to the lawsuit.

The Pike-Fletcher-Terry House is a two-story Greek Revival mansion that was built in 1840 at 411 E. Seventh St., in the heart of Little Rock's MacArthur Park Historic District.

The house is vacant and suffering from neglect and deterioration, according to the lawsuit.

"It was not until June 25, 2021, that representatives of the Museum and/or the Foundation advised heirs of Adolphine Fletcher Terry and Mary Fletcher Drennan that the Museum and Foundation had no further interest in or use for the property, and would not invest any money in maintaining the property," according to the lawsuit.

The Pike-Fletcher-Terry House is "widely recognized as one of the most outstanding antebellum houses in Arkansas, owned by some of the state's most prominent citizens, and the site of many significant events in state history," according to a news release from Richard H. Mays, attorney for the plaintiffs.

The house was built for Albert Pike, who became a general in the Confederate Army, established a national reputation as an attorney and was one of the founders of the national Masonic fraternal organization, according to the lawsuit.

Later, the house was occupied by the family of Capt. John Gould Fletcher, a member of the Capitol Guards during the Civil War who became mayor of Little Rock and Pulaski County sheriff, according to the court filing. His son, John Gould Fletcher Jr., won the Pulitzer Prize for Poetry in 1939.

His wife, Adolphine Fletcher Terry, was instrumental in forming the Women's Emergency Committee to Open Our Schools, which opposed former Gov. Orval Faubus' resistance to the desegregation of Little Rock Central High School in 1958, Mays wrote in a news release. The work led to the recall of three segregationist members of the School Board and the reopening of the Little Rock schools, according to the lawsuit.

"That Adolphine Fletcher Terry, the daughter of a Confederate captain, used a house built by a man who became a Confederate general to promote the cause of racial integration was not lost on many observers nationally as well as locally," according to the lawsuit. "In 1961, Adolphine was selected as one of the 100 most distinguished graduates of Vassar College on the occasion of its 100th anniversary."

In 1964, Mrs. Terry and her sister, Mary Fletcher Drennan, donated the house and the city block on which it is located to the city "for the use and benefit of the Arkansas Arts Center," wrote Mays.

"The deed conveying the property was expressly conditioned on the house and property being maintained in good condition, and that it be used exclusively for the advancement of the cultural, artistic or educational interests of the community," according to Mays. "The deed also provided that, if those conditions were not met, the property would revert to the heirs of Adolphine Fletcher Terry and Mary Fletcher Drennan."

The Arts Center, which is now known as the Arkansas Museum of Fine Arts, has stopped using the property for the purposes specified in the deed and has ceased maintaining the house, causing it to significantly deteriorate, wrote Mays.

"Recent estimates indicate that approximately $1.3 million will currently be required to restore the house to usable condition," he wrote in the news release.

The complaint also argues that the museum foundation or its predecessors acquired an endowment of about $1.5 million expressly for operation and maintenance of the Pike-Fletcher-Terry House. According to the lawsuit, $1 million of the endowment came through the last will of former Gov. Winthrop Rockefeller.

The $1.5 million in endowment funds were "restricted," meaning they could only be used for operations and maintenance of the Pike-Fletcher-Terry House and property, according to the suit.

"The lawsuit asks that the museum foundation be ordered to account for the use and expenditure of that endowment, and that a judgement be granted against the museum for any of the endowment not used on that property," Mays wrote in the news release.

Little Rock City Attorney Tom Carpenter said the city considered taking over operation of the Pike-Fletcher-Terry House from the museum foundation if the endowment came with it.

"I think there have been some conversations, and the city did not get any information about an endowment," he said.

Capi Peck, a Little Rock city director, said the city can't take over operation of the building without the endowment.

"We've got to get the endowment because we don't have the extra $1.5 million that it would take to get it back into a safe place," she said. "There's an endowment to take care of that. That was a specific endowment, and it's not there. I've been told by someone very close to the situation that that money was spent long ago on operations."

Peck said the museum hasn't come forward with information about what happened to the endowment.

"This lawsuit is to force their hand and do some forensic accounting and take a deep dive and find out what happened to that money," she said. "Legally they'll have to provide that information."

The Arkansas Museum of Fine Arts is constructing a new building that's scheduled to open in May. That project is estimated to cost $142 million.

Susan Terry Borne and Beth Terry Foti, two of the plaintiffs in the case and granddaughters of Adolphine Fletcher Terry, said they deeply regretted that it has come to this.

"However, the property that is involved is too important to the political and cultural history of the state of Arkansas to allow it to decay further," they said in the news release.

They plan to regain and restore the property, then find a use for it that will fulfill the wishes of the original donors.

The house was listed on the National Register of Historic Places in 1972.