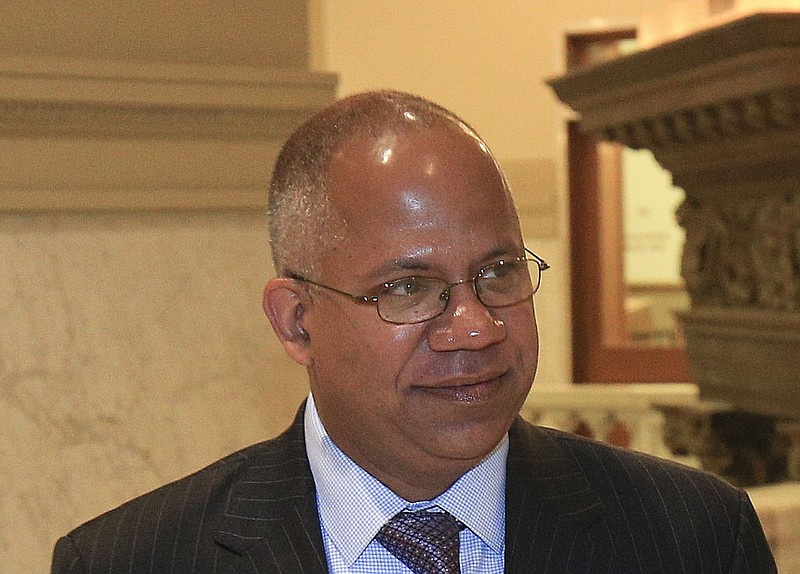 A day after Little Rock elected officials voted to hand him the task of redrawing ward boundaries in light of 2020 census results, City Manager Bruce Moore declined to say Wednesday whether he will pursue either of the draft maps that Mayor Frank Scott Jr. recently distributed to the city board.

In a phone interview with the Arkansas Democrat-Gazette, Moore said he planned to spend the rest of the week examining those maps but that he did not want to comment because he had not had a chance to study them.

During a lengthy meeting Tuesday night, members of the city's Board of Directors approved an ordinance to formally hand responsibility for the redistricting effort to the city manager, in conjunction with any individuals he chooses.

Seven ward-specific representatives serve on the city board along with three at-large representatives. The redistricting process occurs every 10 years after the census to account for population changes, with an eye on maintaining relatively equal populations across all of the wards.

On Monday, Scott distributed two draft maps to city board members. He said the city's planning personnel prepared the maps.

One map, dubbed "New Wards" in Scott's email earlier this week, would make substantial changes to the wards in line with Scott's stated priorities for the redistricting process, which include the elimination of Interstate 630 as a dividing line.

The other map would largely maintain the current arrangement of wards with minor adjustments to account for population shifts.

Under the "New Wards" version, Wards 3 and 4 in northwest-central Little Rock would be dissolved into "North Central" and "Midtown" wards with significant boundary adjustments.

The "Midtown" ward would span areas north and south of I-630, whereas the "North Central" ward would become a long district stretching mostly east and west to encompass communities near the Arkansas River.

Additional adjustments would be made to the boundaries of the neighboring area -- what is currently encompassed by Ward 6. According to the mayor's proposal, much of the area currently covered by Ward 6 would become a "West Central" ward.

When reached via email Wednesday and asked about the mayor's "New Wards" proposal that would effectively merge her and Peck's wards, Webb wrote that she has supported -- and expects to continue to support -- many of Scott's initiatives, "from community schools to the citizen review board to the emergency response on COVID and more."

"However," she added, "I take the legislative role of the Board seriously and don't support erosion of that responsibility. The proposal put forth, has serious flaws which are easily seen. I hope we can have positive discussions, which include our neighborhood associations and residents, which result in something beneficial for our city."

Peck could not be reached Wednesday by phone or email.

Vice Mayor Lance Hines of Ward 5, a representative from west Little Rock who frequently spars with the mayor on policy matters, submitted the ordinance for the consideration of his colleagues on the board, and it was adopted.

Hines argued at the meeting Tuesday that the ordinance provided much-needed clarity.

Asked Wednesday if he has given any thought to the individuals he will rely on to assist with redistricting, Moore said planning staffers have been utilized in the past, calling them "very talented," but he added that no decisions have been made on the process to be used.

According to the ordinance approved this week, redistricting work would have to be completed by the end of November and voted on by the board at its Dec. 7 meeting.

With regard to the timeline, Moore suggested that officials will work hard but noted that "we're not going to rush it," saying he felt confident it would not be an issue if he went back to the board to ask for a little more time.

He indicated that officials would "clear some schedules" over the next few days to get to work.