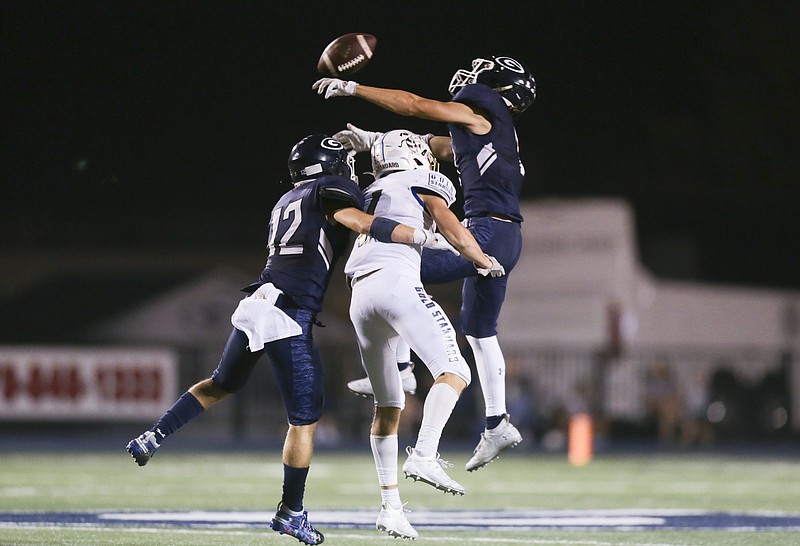 GREENWOOD -- On any given Friday night in the 6A-West, Sebastian Crumb is the smallest player on the field.

"I've always been little," Crumb said. "I knew I was always going to be one of the littlest guys out there no matter what. I've always had to work harder than anybody else. I was raised that way."

Crumb was in on 21 tackles from his free safety position with four solo tackles and 17 assists.

"A lot of it was my teammates doing their job and pushing the plays to me," Crumb said. "Then I got to make the tackle."

Against run-heavy Russellville, Crumb shifted to more of a run defender.

"The way they run their offense, I would go down to linebacker for some plays," Crumb said. "It was definitely fun out there. I wanted more action."

"He's flying around making tackles from everywhere," Young said. "He's a missile. He's fun to watch. My mom's been around football for a long time, and her favorite player to watch is Sebastian Crumb because of the way he plays the game."

Friday's game wasn't just a once-in-a-lifetime performance. He leads the team in tackles with 103 behind a team-high 25 solo takedowns for Jason Gill's defense.

"He's undersized, but he loves football," Young said. "He finds a way to the ball. Coach Gill and his staff do a good job of hiding him so he can make plays. The offense doesn't account for him."

Crumb does go overlooked at times by opposing teams, which he just uses to his advantage.

"The big linemen go after everybody else and leave me be," Crumb said.

Crumb played on the junior varsity team as a junior last year and was expected to be in the mix to start his senior year.

"He was a JV safety for us last year, and we expected that he would be our starting safety or had a chance to contribute at safety," Young said. "Certainly, we didn't expect he would have had the impact that he has had."

He was ready to help the Bulldogs this season.

"I've never had any doubts at all," Crumb said. "I've been used to it. From seventh grade all the way up, we've always played bigger schools. High school, I knew everybody was going to be bigger than me."

Greenwood plays at Benton on Friday.

"Southside passed a lot, but besides Parkview this is one of the most athletic teams we've seen," Crumb said. "They have athletes everywhere. They're a great football team. They've been some of our biggest competition, but we're ready for them."

Greenwood, the defending Class 6A state champion, has been beset by injuries this year and just about the time the Bulldogs were getting back to normal more injuries have hit.

"I've coached 21 years and I've never seen anything like this," Greenwood coach Chris Young said. "We were just getting healthy and getting everybody back and then we lose two players the caliber of Jake Glover and Storm Scherrey on Friday night."

Glover went down early in a 35-7 win over Russellville on Friday and is out for the season. He broke his ankle on the second series. Glover rushed for seven touchdowns and led the Bulldogs in rushing with 576 yards.

Scherrey, a junior defensive back, separated both shoulders on Friday night and is also out for the remainder of the season.

Junior quarterback Hunter Houston is back, however, and appears to be back in form after missing two games earlier due to a minor knee injury.

Friday, he threw for 309 yards and three touchdowns with two of them going to Luke Brewer, who also missed a game earlier this season.

Greenwood started its fourth-string quarterback two weeks ago in a 31-7 win over Lake Hamilton and sophomore Cole Kindle threw for 103 yards and guided an offense that committed no turnovers.

"He played great and managed the game for us well," Young said. "He rotated some in the seventh and eighth grade. He's a big, strong athletic kid. He came in with short preparation and played really well."

Houston's backup, Slade Dean, broke his hand in the first quarter in the conference opener against Little Rock Parkview but played through it. He's back now.

Scherrey, the third-string quarterback in addition to being a starting safety, is now out.

Northside's 23-21 loss to Conway came down to a pair of fourth-down stops by Conway's defense on Friday.

Both were close, real close.

Trailing 17-14, Northside was stopped on a fourth-and-two run just shy of a first down at Conway's 14 with 6:08 left. Although it appeared close, no measurement was taken.

Three plays later, Pum Savoy intercepted a pass, and Sundquist Church scored on a 23-yard run to put Northside up, 21-14.

Northside's defense forced a punt, and Northside faced another fourth down at Conway's 19, needing a yard for a first down. Again, Conway halted the play, and after a measurement, the ball went over to the Wampus Cats with 2:17 left.

Conway, ranked No. 2 in the state behind Bryant, then scored with 22 seconds left on a 1-yard sneak by quarterback Donovyn Omolo.

Church and Ty Massey each rushed for 124 yards with Church running for two touchdowns and Massey one.

Northside travels to North Little Rock, which is ranked No. 3 this week, on Friday.

The Bearcats' running game was at its best on Friday in a 61-21 win over Baptist Prep, like historic best.

Booneville had four backs over 100 yards, which is an extremely rare feat.

Halfback Rocky Ross had just five carries but for 116 yards and a 32-yard scoring jaunt.

"It was something," Booneville coach Doc Crowley said. "They've done a good job for us. The offensive line played real well, the best game they've played all year. That's obviously the reason why. It was something to watch."

"They had the ball with a chance to go up 21-0," Crowley said. "Then we settled in some. Nobody panicked. It was some place our team hadn't been this year. It was good to see how we'd respond."

After the opening quarter Booneville scored on nine straight possessions; three in each quarter.

Booneville plays at Atkins and quarterback Zach Berkemeyer, who's thrown for 1,672 yards and 18 touchdowns. Paris held him to just 171 yards and a touchdown on Friday, but two weeks against Danville he threw for 376 yards and six touchdowns.

The Cedarville Pirates snapped a two-game losing streak and bounced back with a 30-14 win at West Fork on Friday.

Cedarville joined Hackett, Lavaca, Lincoln and West Fork for a five-way tie for second behind league-leading Charleston, which remained undefeated with a 58-22 win at Hackett on Friday.

Hackett's Peyton Hester caught six passes for 170 yards and two touchdowns, and continues to be one of the top receivers in the state.

Maddox Noel paced Lavaca's 39-14 win over Greenwood with 173 yards and two touchdowns in the air and 182 yards and two scores on the ground. He also intercepted two passes on defense

The teams in the 3A-1 may start to separate some with this week's games, which include Mansfield at Lavaca, West Fork at Hackett, Greenland at Cedarville, and Lincoln at Charleston.

The Booneville Bearcats had the rare feat of four backs rushing for at least 100 yards in a 61-21 win over Baptist Prep last week: