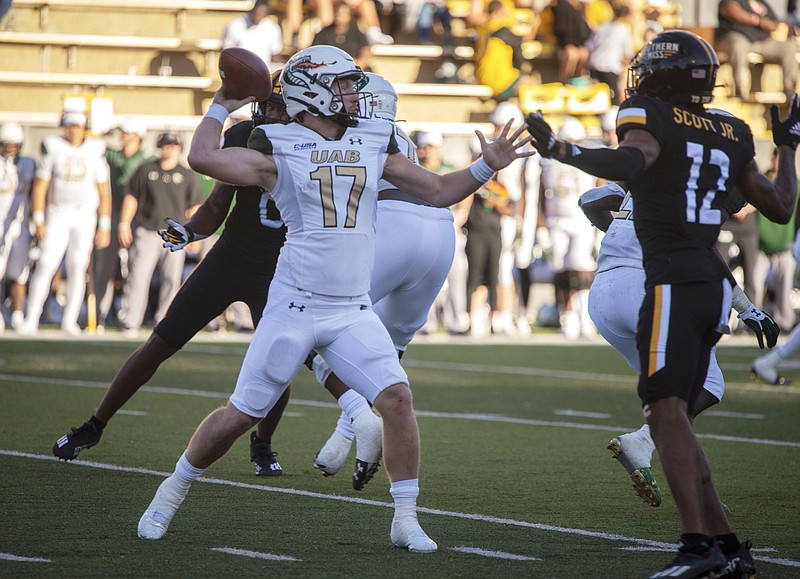 Six schools from Conference USA -- Alabama-Birmingham, UT-San Antonio, Rice, North Texas, Charlotte and Florida Atlantic -- have applied for membership with the American and are expected to be accepted by the end of the week, according to two people with knowledge of the process who spoke with The Associated Press.

An announcement could come as soon as today. The people spoke to AP on condition of anonymity Wednesday because the league was not yet prepared to make its expansion plans public.

The shuffling is part of the fallout stemming from the latest round of conference realignment that kicked off this summer when Oklahoma and Texas decided to bolt the Big 12 for the SEC. The ripple effects of that are now being felt across the country.

The American was in the market for new members after three of its most successful schools -- Cincinnati, Houston and Central Florida -- announced in September they would be joining the Big 12.

Those moves are expected by the 2023 football season, and the American hopes to have its six new members in place when the departing schools leave.

The result would be a 14-team conference, with four schools in Texas -- the three new members and SMU.

C-USA has been a frequent target when the American, formerly the Big East, has needed to reconstitute. After the latest realignment moves have been completed, 12 of the American's 14 members will be former C-USA schools.

Earlier this month, C-USA Commissioner Judy McLeod sent a letter to AAC Commissioner Mike Aresco proposing a merger of sorts between the two conferences to make each a better geographic fit for its members. The AAC had no interest and instead went on the offensive.

In the past, C-USA has poached the Sun Belt Conference when it needed replacement schools. Middle Tennessee, Florida International and Western Kentucky were all members of the Sun Belt.

But the Sun Belt is now in a position of strength relative to C-USA.

This time it could be the Sun Belt poaching C-USA.

"Throughout this process, if we identify a school that adds value to the Sun Belt, we'll certainly consider them for membership," Sun Belt Commissioner Keith Gill said back in September.

Marshall, in Huntington, West Va., would have a natural geographic rival among the Sun Belt's 10-team football conference with Appalachian State, based in Boone, N.C.

Southern Miss could fit between Sun Belt schools South Alabama and Troy to the east and Louisiana-Lafayette and Louisiana-Monroe to the West.

Where could C-USA turn?

"There does come a time when there are no more options," former Sun Belt and Western Athletic Conference Commissioner Karl Benson said.

Liberty, a private school in Lynchburg, Va., has expressed interest in joining a conference that could house its currently independent FBS football team. It has invested heavily in athletics and the Flames have played in bowl games each of the past two seasons. Liberty's other sports programs compete in the Atlantic Sun.

C-USA might have turn to FCS programs looking to make the jump from Division I college football's second-tier to its top level, the Bowl Subdivision.

FCS powerhouse James Madison in Harrisonburg, Va., has shown some interest in moving up and also could be a potential solution for C-USA, if not a target for the Sun Belt.

The American targeted schools based in large media markets and fertile recruiting territory for football.

UAB has been C-USA's most consistent winner in recent seasons, playing in three consecutive league title games and winning two. FAU won Conference USA titles in 2017 and '19 under then-coach Lane Kiffin. North Texas played for a C-USA title in 2017.

UTSA is a relatively new major college football program. The Roadrunners' first season was 2011, but they already have played in two bowl games and are currently undefeated and ranked No. 24 in the AP poll.