Bannon found in contempt; 9 in GOP join in vote to pursue 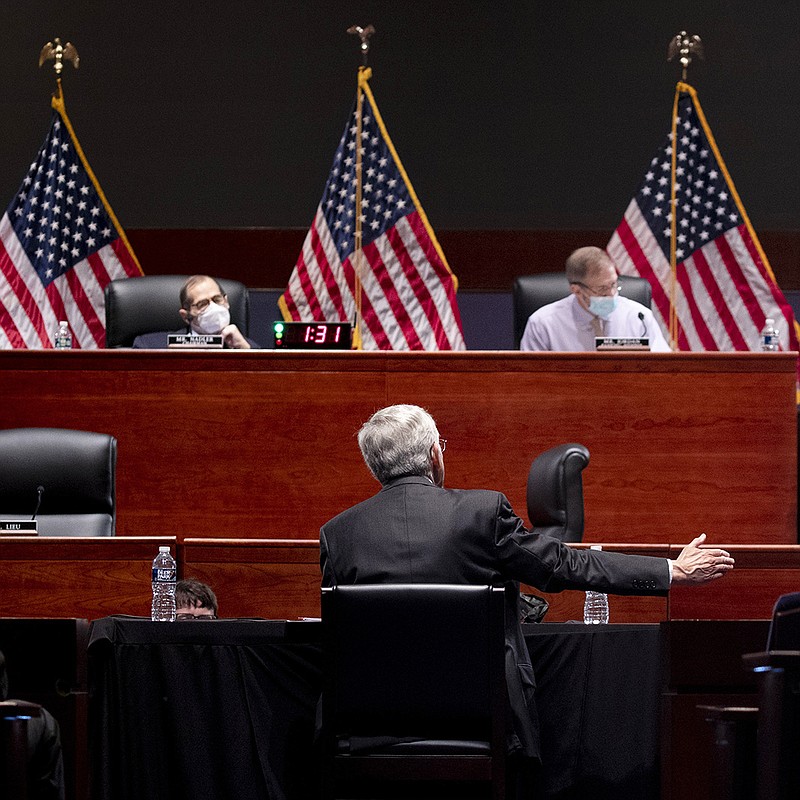 Attorney General Merrick Garland testifies Thursday before a House Judiciary Committee oversight hearing where he gave no indication how the Justice Department would act on the House contempt vote against Steve Bannon. He said his office plans to “make a decision consistent with the principles of prosecution.” (AP/Michael Reynolds)

WASHINGTON -- The House voted Thursday to hold Steve Bannon, a longtime ally and aide to former President Donald Trump, in contempt of Congress for defying a subpoena from the committee investigating the Jan. 6 Capitol insurrection.

In a rare show of bipartisanship on the House floor, the committee's chairman, Rep. Bennie Thompson, D-Miss., led the floor debate along with Republican Rep. Liz Cheney of Wyoming, one of two Republicans on the panel. Still, the vote was 229-202, with all but nine GOP lawmakers who voted saying "no."

The House vote sends the matter to the U.S. attorney's office in Washington, where it will now be up to prosecutors in that office to decide whether to present the case to a grand jury for possible criminal charges. It's still uncertain whether they will pursue the case. Attorney General Merrick Garland said at a House hearing Thursday only that they plan to "make a decision consistent with the principles of prosecution."

What was clear Thursday in the debate that preceded the vote was that, nine months after the deadliest attack on the Capitol in two centuries, many Republicans in Congress continue to downplay, ignore or validate what took place as their party continues to embrace Trump's claim of a stolen election.

Democrats have vowed to comprehensively probe the assault in which hundreds of Trump supporters battered their way past police, injured dozens of officers and interrupted the electoral count certifying President Joe Biden's November victory.

[Video not showing up above? Click here to watch » arkansasonline.com/1022bannon/]

Lawmakers on the panel say they will move swiftly and forcefully to punish anyone who won't cooperate with the probe.

"We will not allow anyone to derail our work, because our work is too important," Thompson said ahead of the vote.

The majority of the GOP bloc followed the lead of Trump, who in a statement hours before the vote derided the election he lost as a crime and praised the violent mob attack on Jan. 6 -- which injured 140 police officers and claimed several lives -- as a legitimate response.

Republicans call it a "witch hunt," say it is a waste of time and argue that Congress should be focusing on more important matters.

Indiana Rep. Jim Banks, leading the GOP opposition on the floor, called the probe an "illicit criminal investigation into American citizens" and said Bannon is a "Democrat party boogeyman."

Cheney and Illinois Rep. Adam Kinzinger are the only two Republicans on the Jan. 6 panel, and both have openly criticized Trump and his role in fomenting the insurrection while the majority of House Republicans have remained silent in the face of Trump's claims of widespread fraud in the election. Trump's contentions were rejected by election officials, courts across the country and his own attorney general.

The Jan. 6 committee voted 9-0 Tuesday to recommend the contempt charges after Bannon missed a scheduled interview with the panel last week, citing a letter from Trump's lawyer that directed him not to answer questions.

[Video not showing up above? Click here to watch » arkansasonline.com/1022garland/]

Bannon was a key architect of Trump's 2016 election victory and was White House chief strategist until August 2017. Last year, he was charged alongside three others in what federal prosecutors described as a fundraising scam targeting the donors of a private campaign to build a wall along the U.S.-Mexico border.

Trump pardoned Bannon in late January as one of his last acts as president, and a federal judge dismissed the fraud case against Bannon in May.

Bannon is considered a key witness for the House select committee because he had conversations with Trump in the weeks leading up to Jan. 6 and held a meeting with Trump allies on Jan. 5 at the Willard Hotel.

In a report recommending the House find Bannon in contempt, the committee repeatedly cited comments he made on his radio show on Jan. 5 -- when Bannon promised "all hell is going to break loose tomorrow" -- as evidence that "he had some foreknowledge about extreme events that would occur the next day."

Lawmakers on the panel said Bannon was alone in completely defying its subpoena, while more than a dozen other subpoenaed witnesses were at least negotiating with them.

"Mr. Bannon's own public statements make clear he knew what was going to happen before it did, and thus he must have been aware of -- and may well have been involved in -- the planning of everything that played out on that day," Cheney said ahead of the vote. "The American people deserve to know what he knew and what he did."

"Mr. Bannon refused to comply with a valid subpoena from a duly formed congressional committee, claiming broad executive privilege," Meijer said in a statement. "There exists no conceivable interpretation of executive privilege that would encompass an individual outside of government conferring with senior government officials on nonofficial matters."

Mace, who represents a political swing district, told reporters after the vote that she wants to maintain the power of subpoenas for future Republican majorities.

"I want the power to subpoena, when we start investigating some of the crises that are facing the Biden administration right now," she said, citing immigration and the withdrawal from Afghanistan.

Biden himself invoked the insurrection and linked it to the nation's turbulent history as he marked the 10th anniversary of the Martin Luther King, Jr. Memorial on the National Mall.

"We're confronting the stains of what remains a deep stain in the soul of the nation: hate and white supremacy," Biden said, describing what he said is a line in American history from slavery to the present day.

"In a violent, deadly insurrection on the Capitol nine months ago -- it was about white supremacy, in my view," he said.

Contempt of Congress is a misdemeanor criminal offense that can result in up to one year in prison and a fine of up to $100,000.

Even if the Justice Department does decide to prosecute, the case could take years to play out -- potentially pushing past the 2022 election, when Republicans could win control of the House and end the investigation.

There's still considerable uncertainty about whether the department will pursue the charges, despite Democratic demands for action. It's a decision that will determine not only the effectiveness of the House investigation but also the strength of Congress' power to call witnesses and demand information.

While the department has historically been reluctant to use its prosecution power against witnesses found in contempt of Congress, the circumstances are exceptional as lawmakers investigate the worst attack on the U.S. Capitol in two centuries.

Asked at a House Judiciary Committee hearing Thursday how the Justice Department would handle such a referral, Garland said it "will do what it always does in such circumstances -- it will apply the facts and the law."

Legal experts have cast doubt on the merit of Bannon's defense of his defiance of the subpoena and say the former president's immunity from congressional subpoena extends only to his closest White House advisers -- and not to private citizens like Bannon.

Trump's sweeping claims of executive privilege to shield his activities and his aides and allies from congressional scrutiny have also been questioned by constitutional experts and lawyers.

Democrats are pressuring the Justice Department to take the case, arguing that nothing less than democracy is on the line.

"The stakes are enormous," Maryland Rep. Jamie Raskin said. "What we're talking about is this massive, violent assault on American democracy."

If the Justice Department doesn't prosecute, the House has other options, including a civil lawsuit. That could also take years, but it would force Bannon and any other witnesses to defend themselves in court.

The lingering acrimony over the insurrection, and the Bannon subpoena, flared Wednesday at a House Rules Committee hearing held to set the parameters of Thursday's debate. Under intense questioning from Raskin, Florida Rep. Matt Gaetz, a Republican who defended Trump and opposed the Bannon contempt effort, said he accepted that Biden is the president but would not say that Biden won the election.

Raskin said, "I know that might work on Steve Bannon's podcast, but that's not going to work in the Rules Committee of the United States House of Representatives, Mr. Gaetz. I'm sorry."

Several times during Thursday's debate, Democrats reminded their colleagues that people were injured and killed during the insurrection.

Raskin later read the former president's statement aloud on the House floor and replied: "No, Mr. Trump, I'm sorry. That's what we call an election in America."

Information for this article was contributed by Mary Clare Jalonick, Alan Fram, Michael Balsamo, Eric Tucker and Farnoush Amiri of The Associated Press; by Luke Broadwater of The New York Times; and by Felicia Sonmez, Marianna Sotomayor, Jacqueline Alemany, Paul Kane, Devlin Barrett and Shayna Jacobs of The Washington Post. 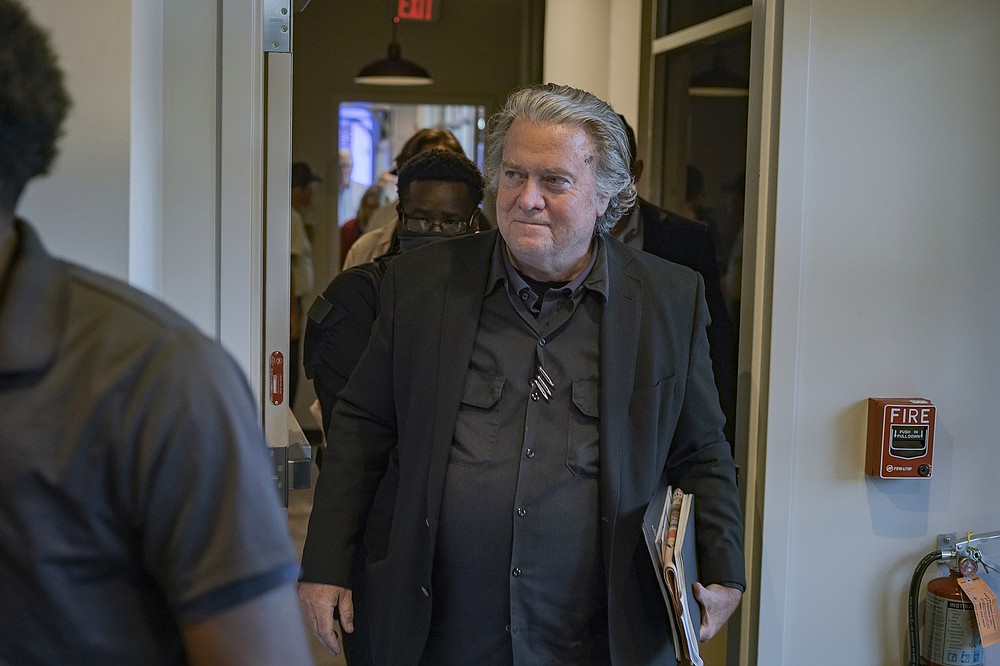 Steve Bannon, a former top adviser to then President Donald Trump, after speaking at a rally in Richmond, Va., Oct. 13, 2021. The House committee investigating the Jan. 6 Capitol riot on Tuesday, October 19, voted unanimously to recommend charging Bannon with criminal contempt of Congress for defying its subpoena, sending the matter to the House, which is expected to approve the move and hand the matter over to the Justice Department for prosecution. (Carlos Bernate/The New York Times) 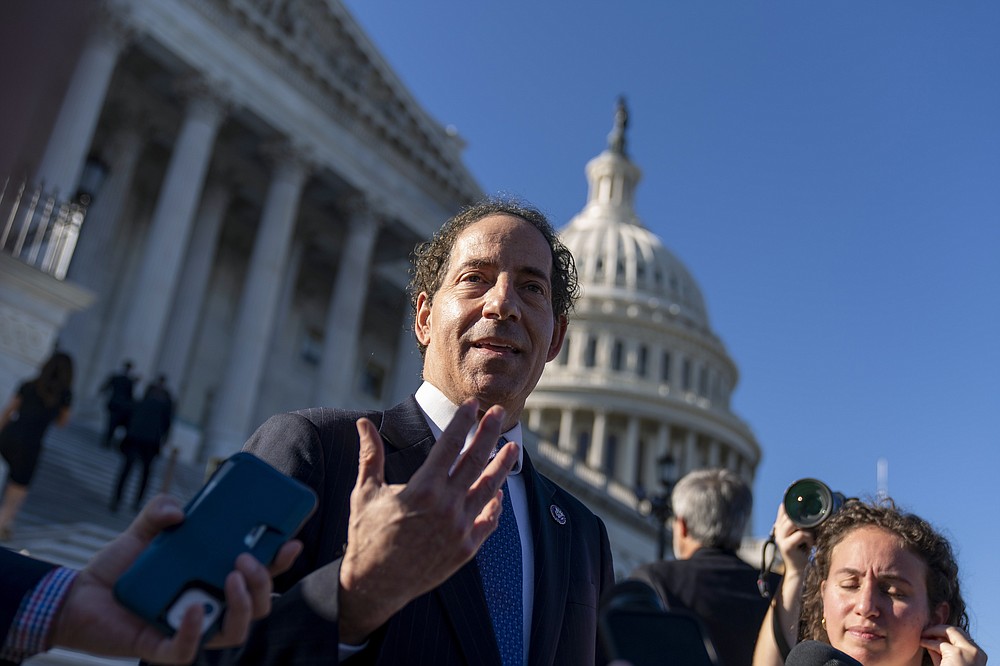 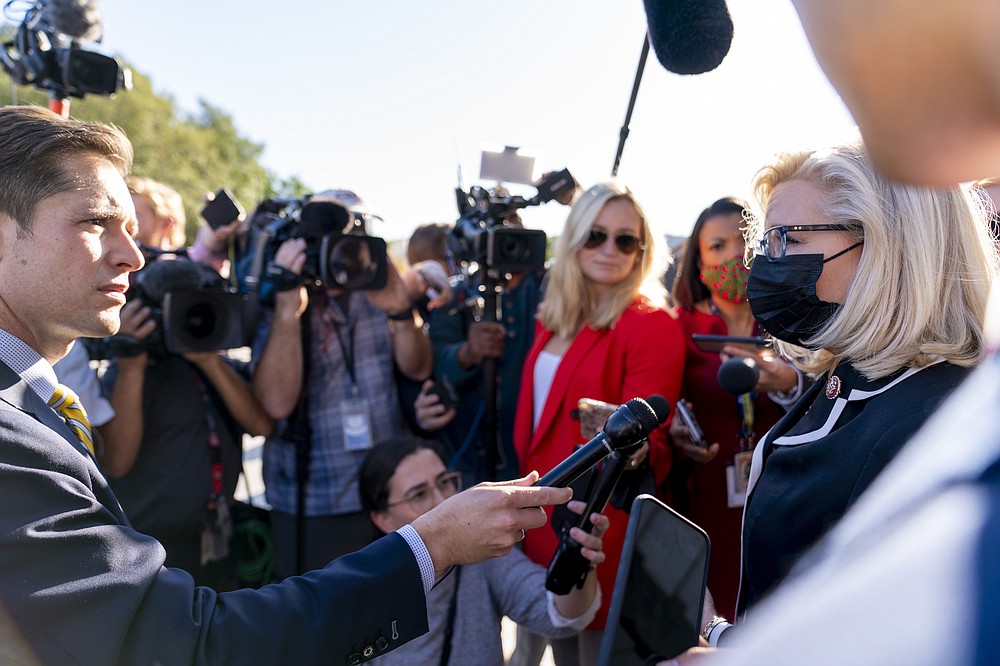 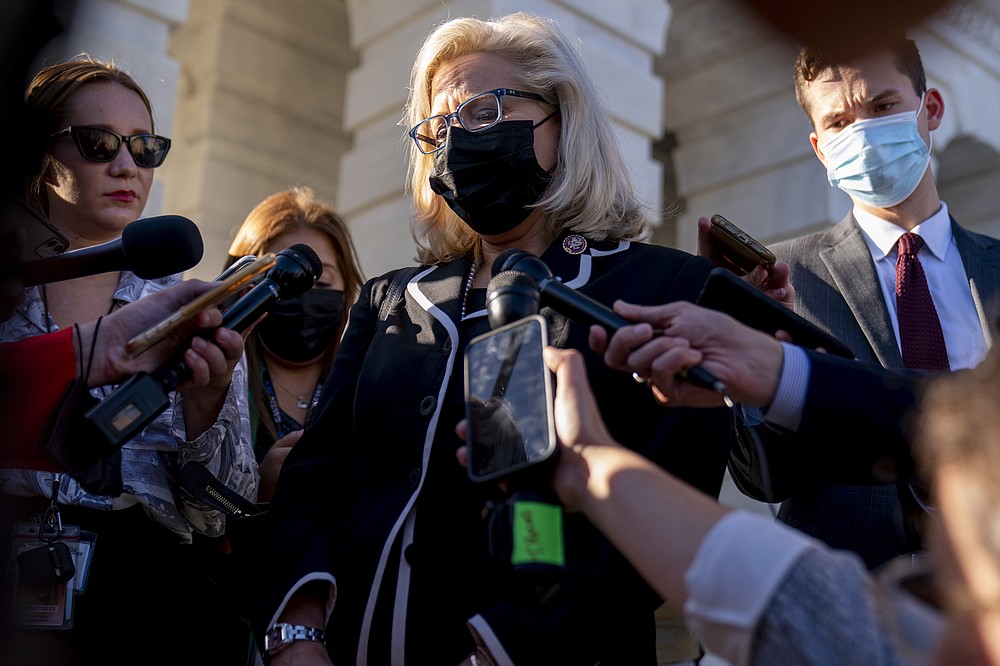 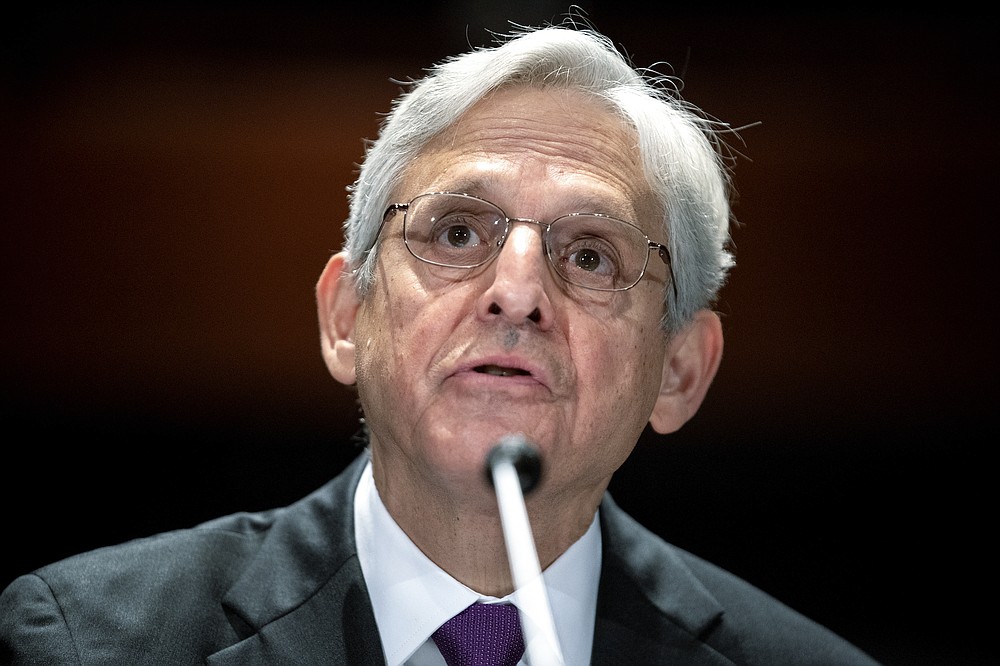 Attorney General Merrick Garland testifies before a House Judiciary Committee oversight hearing of the Department of Justice on Thursday, Oct. 21, 2021, on Capitol Hill in Washington. (Greg Nash/Pool via AP) 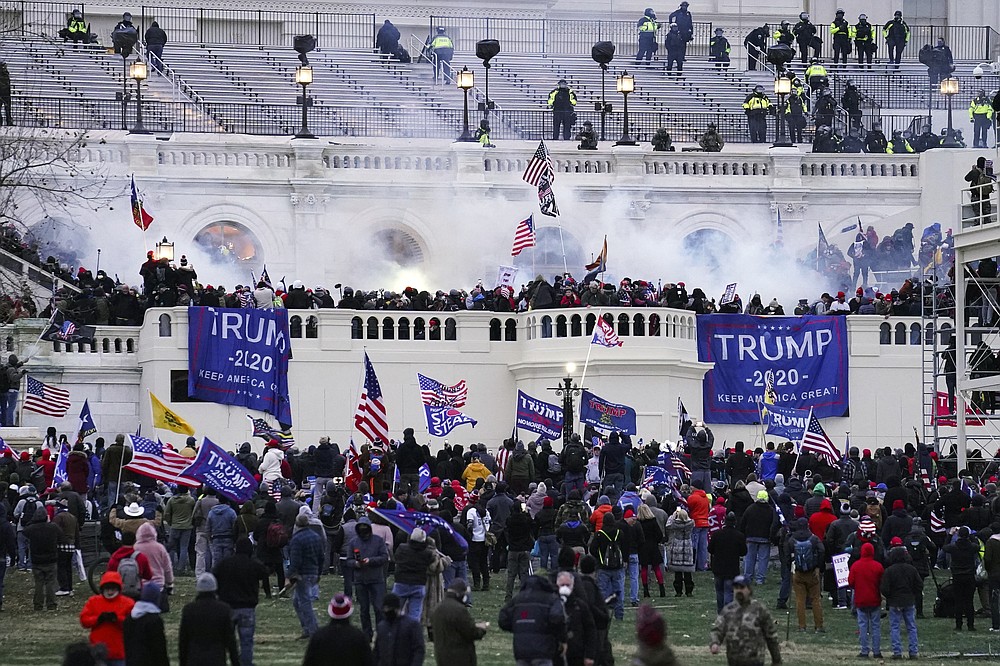 FILE - In this Jan. 6, 2021 file photo, violent protesters, loyal to President Donald Trump, storm the Capitol in Washington. A House committee tasked with investigating the Jan. 6 Capitol insurrection is moving swiftly to hold at least one of Donald Trump&#x2019;s allies, former White House aide Steve Bannon, in contempt. That's happening as the former president is pushing back on the probe in a new lawsuit. (AP Photo/John Minchillo) 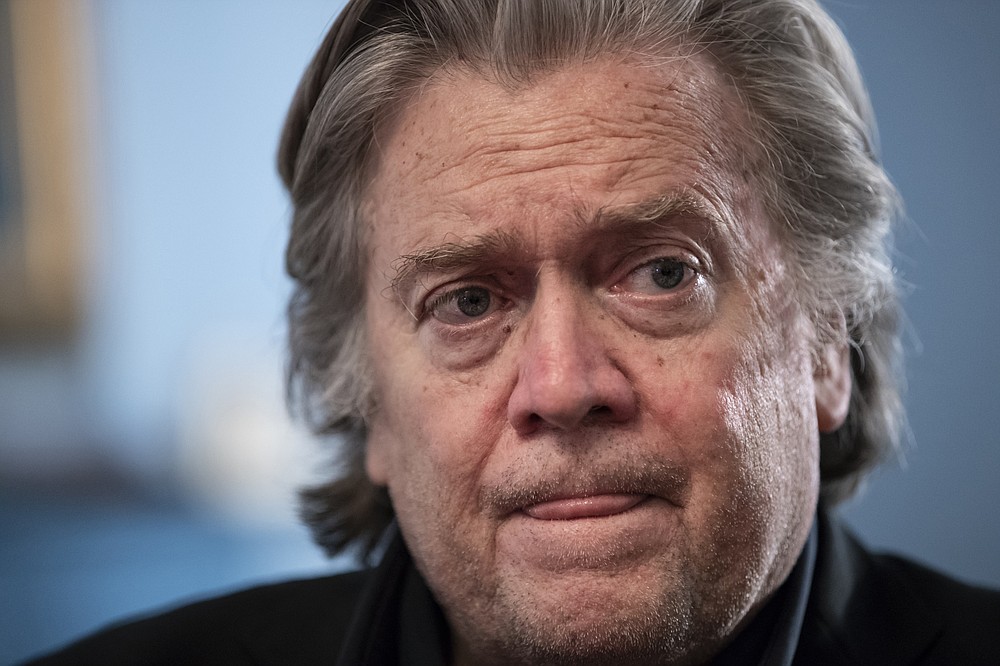 In this file photo from Sunday, Aug. 19, 2018, Steve Bannon, President Donald Trump's former chief strategist, talks about the approaching midterm election during an interview with The Associated Press, in Washington. The special congressional committee investigating the Jan. 6 insurrection has set a vote for Tuesday to recommend criminal contempt charges against Bannon after he defied the panel's subpoena. (AP Photo/J. Scott Applewhite, file) 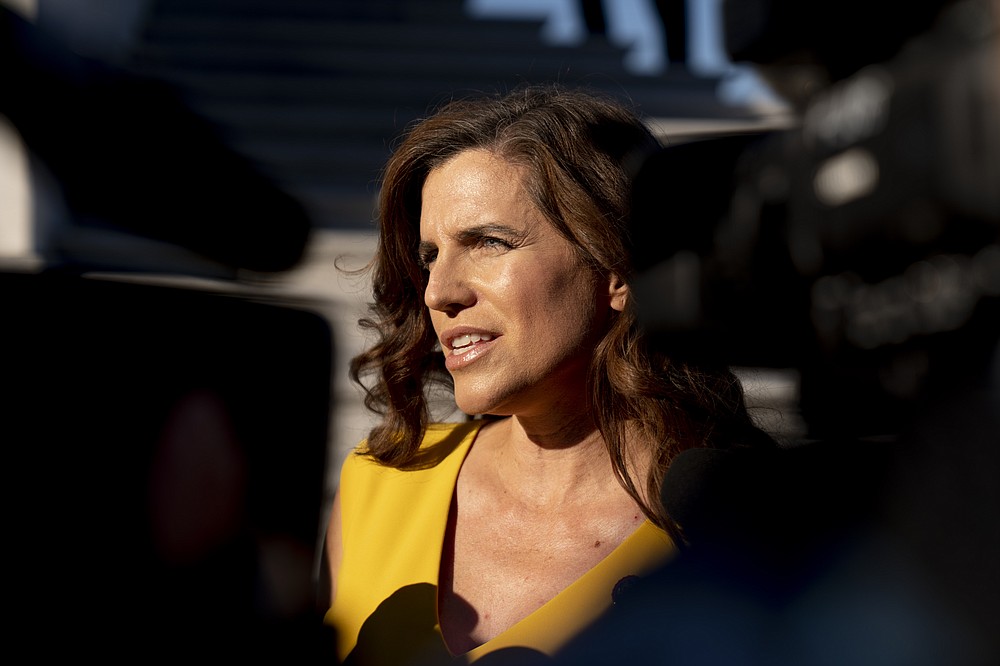