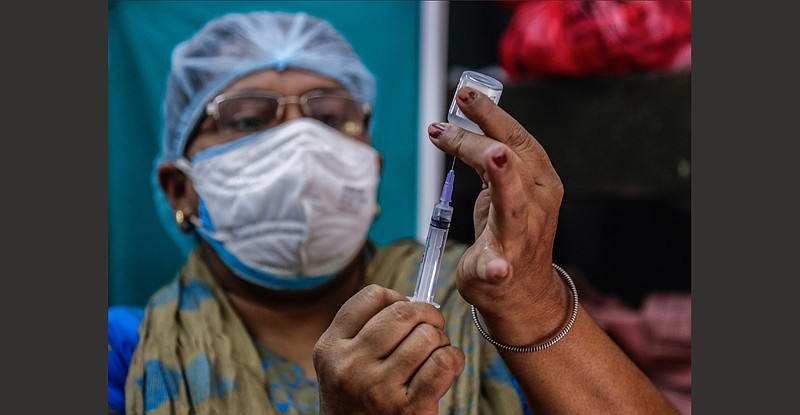 A health worker prepares a dose of Covaxin covid-19 vaccine Thursday at a health center in Garia, India, as the country marked the administering of its 1 billionth dose, passing the milestone in the wake of the delta variant’s crushing surge earlier this year. (AP/Bikas Das)

The Centers for Disease Control and Prevention on Thursday endorsed booster shots of the Moderna and Johnson & Johnson covid-19 vaccines for tens of millions more Americans.

The decision follows an agency endorsement last month of booster shots of the Pfizer-BioNTech vaccine and opens the door for many Americans to seek out a booster shot as soon as today.

The vaccines "are all highly effective in reducing the risk of severe disease, hospitalization, and death, even in the midst of the widely circulating delta variant," Dr. Rochelle Walensky, the CDC director, said in a statement.

Her approval brings the country closer to fulfilling President Joe Biden's promise in August to offer boosters to all adults. The pandemic is retreating in most of the country, but there are still about 75,000 new cases every day, and about 1,500 covid deaths.

Biden's pledge angered many experts, including some advising the Food and Drug Administration and the CDC, who said scientists had not yet had a chance to determine whether boosters were actually necessary.

Studies showed the vaccines remained very effective against severe disease and death, although their effectiveness might have waned against milder infections, particularly as the delta variant spread across the nation this summer.

[Video not showing up above? Click here to watch » arkansasonline.com/1022biontech/]

The purpose of the vaccines is to prevent illness severe enough to require medical attention, not to prevent infection, Dr. Wilbur Chen, an infectious disease physician at the University of Maryland and a member of the CDC panel, the Advisory Committee on Immunization Practices, said during the deliberations Thursday.

"It might be too much to ask for a vaccine, either a primary series or the booster, to prevent all forms of infections," Chen said.

On Wednesday, the Food and Drug Administration authorized booster shots for millions of people who received the Moderna and Johnson & Johnson vaccines, just as it did for recipients of Pfizer-BioNTech shots last month. The FDA also gave the green light for people eligible for boosters to get an extra dose of a different brand from the one they first received.

But in practice, who will get the shots and when depends greatly on the CDC's final guidance. Although the agency's recommendations do not bind state and local officials, they hold great sway in the medical community.

On Thursday, members of the CDC's panel endorsed the so-called mix-and-match strategy, saying people fully immunized with one company's vaccine should be allowed to receive a different vaccine for their booster shot.

Limited evidence strongly suggests that booster doses of one of the two mRNA vaccines -- Moderna or Pfizer-BioNTech -- more effectively raise antibody levels than a booster dose of the Johnson & Johnson vaccine.

For recipients of the single-shot vaccine, a covid-19 booster is recommended for everyone at least two months after their vaccination.

That's because the Johnson & Johnson vaccine hasn't proved as protective as the two-dose Moderna or Pfizer options.

Having already authorized the Pfizer-BioNTech booster, however, some advisers said in interviews that they felt compelled to do the same for the other two vaccines, adding that it was only fair to people who had received those vaccines.

Moderna's booster shot will not be the same as its initial shot. The dose will be 50 micrograms, which is half the dose given in the initial rounds of immunization. Scientists from Moderna presented data indicating that the smaller dose is enough to rouse the immune system.

At last week's meeting, the FDA advisers were shown evidence indicating that switching between two vaccine types might produce a richer immune response than boosting with the same vaccine.

San Francisco has offered Pfizer-BioNTech or Moderna shots to Johnson & Johnson recipients since August, and many Americans who initially received the Johnson & Johnson vaccine have sought out booster doses of those vaccines on their own before federal agencies had endorsed them.

But the FDA advisers could not vote to recommend that people who initially got the Johnson & Johnson vaccine follow it up with one of the mRNA vaccines because the FDA did not give them that option.

"The formal vote was on the J&J booster following the J&J vaccine," said Dr. Stanley Perlman, an immunologist and coronavirus expert at the University of Iowa. But "everybody knew that the data would show that the heterologous boost [shot of a different vaccine] would be better."

The majority of the nearly 190 million Americans who are fully vaccinated against covid-19 have received the Pfizer or Moderna options, while Johnson & Johnson recipients account for only about 15 million.

Public health departments across California are gearing up to administer vaccines to children 5 to 11 in the coming weeks and officials say they are planning "family-friendly" events -- including at schools -- to persuade parents and guardians to get their kids vaccinated.

The White House detailed plans Wednesday for the expected authorization of the Pfizer shot for elementary school youngsters in a matter of weeks.

Federal regulators will meet over the next two weeks to weigh the safety and effectiveness of giving low-dose shots to the roughly 28 million children in that age group.

Within hours of formal approval, which is expected after the FDA signs off and a CDC advisory panel meets Nov. 2-3, millions of doses will begin going out to providers across the country, along with the smaller needles needed for injecting young children.

California also plans to continue masking requirements in K-12 schools. Gov. Gavin Newsom announced earlier this month that the state would have the nation's first coronavirus vaccine mandate for schoolchildren -- about 6.7 million public and private school students in the nation's most populous state -- once the federal government has finished fully vetting the shots.

California has one of the highest vaccination rates in the country, but also a vocal minority skeptical of both the vaccine and the government's assurances of its safety. Last month, more than a thousand people gathered at the state Capitol to protest vaccine mandates.

Information for this article was contributed by Apoorva Mandavilli of The New York Times; and by Lauran Neergaard, Mike Stobbe and Stefanie Dazio of The Associated Press.