Golden Lion alum cites past snubs, but some still pulling for Razorbacks 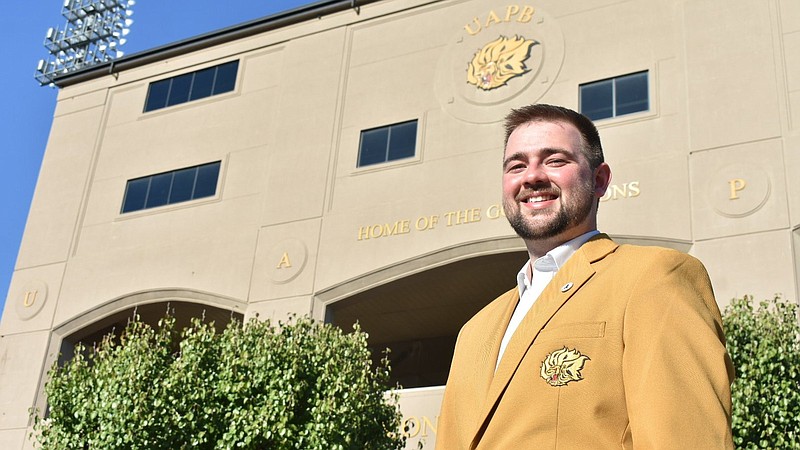 Sam Beavers played at his hometown UAPB and will root for the Golden Lions when they face the Razorbacks for the first time in Little Rock. (Pine Bluff Commercial/I.C. Murrell)

For Sam Beavers, the disdain for the University of Arkansas, Fayetteville, is real, even though he grew up a Razorback fan.

"I can't stand them for what they did to the University of Arkansas at Pine Bluff, my alma mater," said Beavers, a former kicker and punter for the Golden Lions who graduated in 2020. "You go back and you look at guys like Frank Broyles using the state legislature to intentionally hurt other schools in the state of Arkansas."

It is well documented that Broyles, Arkansas' football coach from 1958-76 and athletic director from 1974-2007, held a longstanding policy against playing in-state schools to protect the interest of UA athletics. Arkansas has not played an in-state opponent in football since 1944, when it defeated Arkansas A&M College, now UA-Monticello.

"There are laws on the books right now that prevent us from putting lights on our baseball stadium because of what funds are allowed to be used in certain places," the Watson Chapel High School graduate said. "[Broyles] knew it wasn't going to hurt him because he knew he was always going to have the Razorback Foundation [a fundraising arm of UA athletics]. They're always going to have Walmart and Stephens and all of that.

"The schools that don't have that, it really hurts us. I'm not a big fan of that."

Broyles died in 2017, and his successor, Jeff Long, didn't budge on the policy. But current Athletic Director Hunter Yurachek has since opened the door for Arkansas to reach out to sister schools such as UAPB, whose baseball and women's basketball teams have taken on Razorback teams in the past three years. (Arkansas won last year's basketball game and all three baseball meetings.)

Beavers said he researched Arkansas' position on not playing in-state schools while he served on the search committee that selected Cedric Thomas as head football coach for the 2018 season. (Thomas resigned after the 2019 season and was replaced by Doc Gamble.)

It was then when Beavers said his pride in the Hogs waned, based on what he learned about them.

On Saturday morning, Beavers will cheer hard for his beloved Golden Lions against the flagship program of the University of Arkansas System inside War Memorial Stadium in Little Rock. The UA's flagship status and marketability, of course, has drawn fans from all over Arkansas, including Pine Bluff, where the men's basketball team would play twice a season in the early days of the city's Convention Center.

Nannette Lewis, a retired junior high school teacher who lives in White Hall, is a diehard Razorback fan and has Razorback paraphernalia throughout her home and on her vehicle windshield to prove it.

Although Lewis and her husband Larry, a retired three-sport coach who graduated from UAPB, have spent all of their lives in the Pine Bluff area, their strong love for the red-and-white outweighs local loyalty for Saturday.

The Lewises said they're rooting for the Hogs to maintain the momentum second-year Coach Sam Pittman has built within the program.

"The best thing about it is that they're paying money to a sister institution rather than an out-of-state university," said Nannette Lewis, who graduated from UA-Little Rock. "It's like a family reunion where you bring your cousins together to play touch football in the backyard. Both sides definitely want to win, but the loser can be happy for the winner because they are still family."

"For us, I think that's everything," Beavers said. "You've got a couple of sports on campus that make money, and that money goes to support everybody else. You've got a great women's volleyball team this year and great women's soccer. That money comes from the basketball and football that we're able to play."

Ray Jackson, a maintenance worker in the Pine Bluff School District, attended UAPB but is cheering on the Razorbacks on Saturday.

One reason Jackson gave is that his sister Juliet played four years on Arkansas' women's basketball team. Juliet Jackson scored 1,213 points at Arkansas and led the Razorbacks to the Elite Eight in 1990.

Another reason is Ray Jackson's hometown ties to UA athletics.

Pine Bluff native and UAPB graduate Brent Lowe is taking his two sons to Saturday's game and said they'll sit on UAPB's side, even though Lowe is a Hogs fan.

"Not so much as rooting [for Arkansas], but it's almost like, in reality, I'm expecting the Razorbacks to win," said Lowe, who now lives in Mayflower. "I just want a good showing and everybody to have a good time, no injuries. I'll be surprised if the Golden Lions make a game of it."

Beavers said it would have been cool for UAPB to take on Arkansas during his college days. The only other time UAPB took on a team from a Power Five conference was in the 2019 season opener, when Beavers was a student assistant coach and Texas Christian University beat the Lions 39-7. 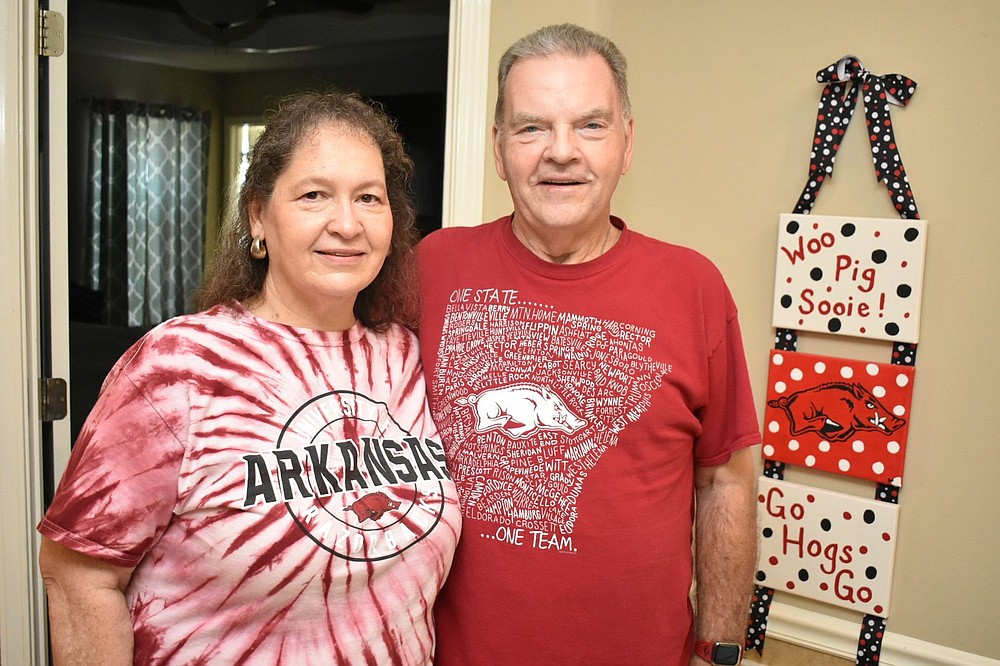 Nannette and Larry Lewis are lifelong University of Arkansas fans and are maintaining their loyalty to the team during Saturday’s game against UAPB, where Larry earned his degree. (Pine Bluff Commercial/I.C. Murrell)