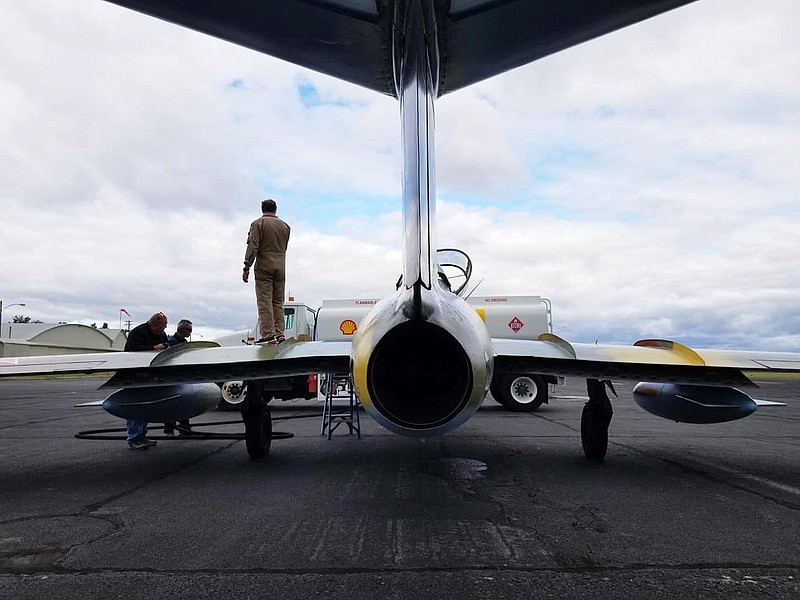 A Grider Field line crew attends to a Russian MIG 15 that stopped for fuel. The Pine Bluff Regional Airport is close to finishing renovations thanks in part to the American Rescue Plan, which helped fund the $2 million project. (Special to the Commercial)

Pine Bluff Regional Airport at Grider Field has been a staple in the region since 1941. From being a training center, hosting formation flying clinics, and celebrating Black Pilots of America during Memorial Day, this airport receives pilots from all over the country.

Much-needed renovation projects are underway, thanks to the American Rescue Plan signed into law by President Biden on March 11, 2021, which includes $8 billion in funds to be awarded as economic assistance to eligible U.S. airports to prevent, prepare for, and respond to the coronavirus pandemic.

To distribute these funds, the Federal Aviation Administration established the Airport Rescue Grants making grants available to all airports that are part of the national airport system, including all commercial service airports, all reliever airports, and some publicly owned general aviation airports.

According to Hale, the taxiway, which is the path that allows aircraft to travel to and from the runway, is currently being extended to run adjacent to the runway.

“The runway was laid down in 1947 and when they put the original runway and taxiway in, at the very south end they had a small deviation which looking at some historical pictures of other airfields that seemed to be a common practice at the time in the ’40s and ’50s,” said Hale.

Hale said when the runway was extended from 3,500 to 6,000 feet , rather than straightening the deviation out in the taxiway, the curve just became part of the extension.

“That is considered a nonstandard deviation on an airfield,” said Hale. “We requested to straighten it out and the FAA awarded us a grant to do so.” The project will cost approximately $2 million dollars and is expected to be complete in the next couple of weeks.

Also, being worked on simultaneously is an upgrade to the lighting system that illuminates the runway and taxiway.

“Our existing lighting system for the runway is 30-plus years old and we have had some maintenance issues with it,” said Hale.

According to Hale, his staff is tasked with maintaining 250 lights on an antiquated system that has had several issues over the years. The new system will replace the old canned fixtures, provide new conduits for the wiring, and new LED light fixtures.

The taxiway has blue globes so pilots can differentiate the two. The runway has white lights with the last third of the runway illuminated with amber lights to warn pilots that the runway is about to end.

“The new LED lights will be brighter, more visible, and require less maintenance,” said Hale. “This is a significant upgrade for our airport. It is way past its expected lifespan. We’re past due for an upgrade.” Other improvements to the airport include a pilot’s lounge.

New leather furniture was delivered and provides a relaxing atmosphere. Hale also wants to add a charging station in the lobby area after noticing how more electronic devices are being used for navigation purposes.

“It would be a good addition,” he said.

“As an aviator, as a flyer, these things are very important for the safety of the airport and for travelers that are coming into town and use our facility here,” said Johnson, who said Hale had requested these improvements for years. “I’m glad to see it come into fruition. It’s a big plus for the city of Pine Bluff.”