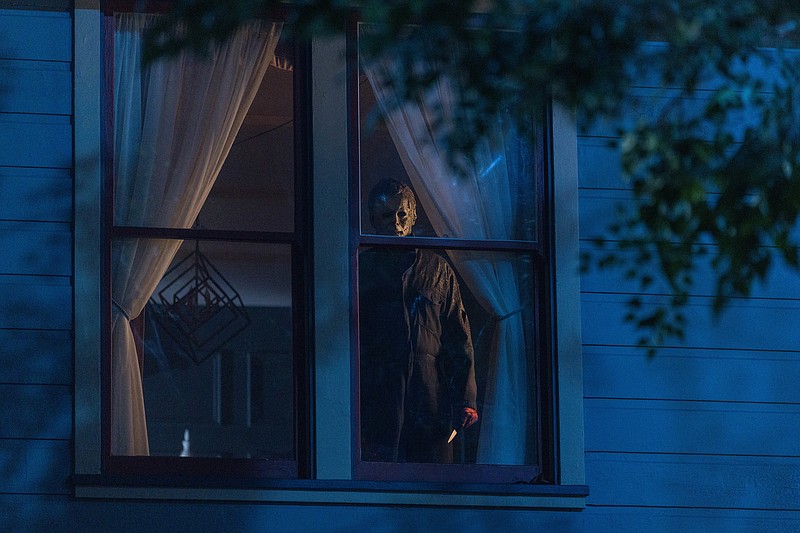 James Jude Courtney peers through a window as “ The Shape” in the spooky ooky “Halloween Kills.”

The umpteenth installment in the blockbuster "Halloween" franchise, which was projected to gross $35 million to $40 million, smashed the opening-weekend box office record for a horror film released during the covid-19 pandemic.

Now in second place is Paramount's "A Quiet Place Part II," which managed to generate a whopping $47.5 million back in May as one of the first highly touted theatrical-exclusive releases amid the ongoing public health emergency. "Halloween Kills" also easily surpassed Warner Bros.' "The Suicide Squad" as the highest-grossing R-rated movie to launch during the pandemic; the DC antihero film opened to $26 million in August.

"Despite the fact that this movie was available on Peacock with a relatively modest buy-in -- for this movie to earn over $50 million is a real testament to that movie theater experience and how singular, essential and [irreplaceable] it is," said Paul Dergarabedian, a senior media analyst at Comscore.

"Because it's a horror film and an iconic franchise, [people] opted in for that communal experience."

The Oscar-bait period drama just barely edged out Disney and Marvel's "Shang-Chi and the Legend of the Ten Rings" -- which grossed $3.5 million in its seventh weekend -- for fifth place. The disappointing performance of "The Last Duel" could be viewed as an ominous sign for the flock of awards season contenders scheduled to open in November and December. The older demographics who typically fuel those grosses still appear to be more reluctant to return to theaters.

Also coming off an underwhelming weekend at the domestic box office is No. 2 "No Time to Die," which earned $24.3 million in its second weekend for a North American cumulative of $99.5 million. The 56% drop is steeper than those of the previous two James Bond films, as well as other big franchise releases.

Although the "Halloween" and Bond franchises date back several decades, their divergent target demographics have merited different rates of success. Thanks to their horror genre, "Halloween" movies generally appeal to younger and more diverse moviegoers, who tend to come out in droves on opening weekend, Dergarabedian said.

Bond films, on the other hand, typically perform better among more mature audiences that are less likely to rush theaters all at once.

"One of the greatest things that happened for movie theaters is the continued allure and appeal of the horror movies," Dergarabedian added.

"You're able to leave the outside world behind and, for a couple of hours, really immerse yourself in these otherworldly situations and these terrifying situations. And it's very cathartic for so many people. And that's been true since the beginning of cinema."

Overall, October has been on a roll for theatrical grosses, boosted by hot titles including "Venom" and Bond. This marked the third consecutive weekend to see the total domestic box office top $100 million.