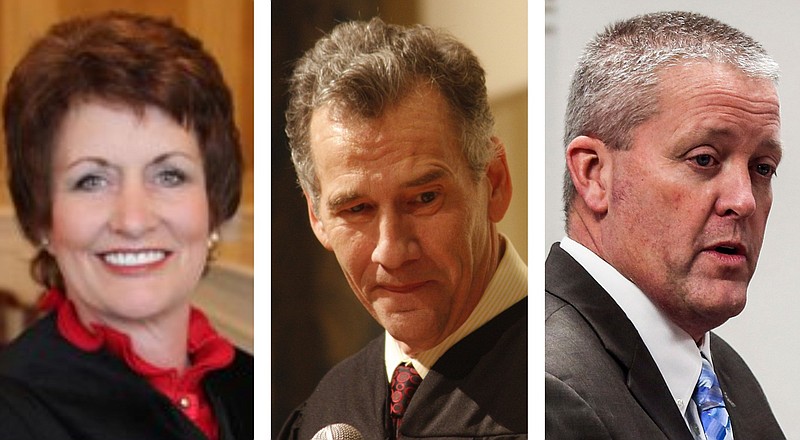 Actions by the state Legislature and the Arkansas Racing Commission to add rules and requirements to the casino amendment were in line with the Arkansas Constitution, the state Supreme Court ruled Thursday.

The state's high court reversed and dismissed -- with four justices affirming, two dissenting and one not participating -- a ruling by Pulaski County Circuit Judge Tim Fox that declared unconstitutional a commission rule and state law that required that letters of endorsements for casino licenses come from local officials in office at the time the license application is submitted.

"Accordingly, we hold that the plain language of Amendment 100, passed by the people of Arkansas stating 'the county judge' means the county judge in office at the time the 'casino applicant' submitted its application to the [Arkansas Racing Commission]," Supreme Court Justice Karen Baker wrote.

State officials couldn't chart a clear path forward for the Pope County casino license Thursday, saying the matter would be decided in the coming weeks.

Casey Castleberry, attorney for Gulfside Casino Partnership, said the group -- which had been issued the Pope County license before the issue got entangled in court -- was disappointed by the Supreme Court's decision.

"But this isn't the the end of the road," Castleberry said. "We remain committed to building a first-class entertainment destination in Pope County and bringing good-paying jobs and economic development to the state."

The initial case was brought by Gulfside in 2019 after its license application was denied by the Racing Commission because its letter of support was signed by former Pope County Judge Jim Ed Gibson just days before his term expired on Dec. 31, 2018.

The Racing Commission did not open the first application period until May 2019.

Cherokee Nation Businesses later submitted an application to the Racing Commission after gaining support from Ben Cross, the current Pope County county judge, as well as from the Pope County Quorum Court.

Cross wrote a letter of support for Cherokee Nation Businesses after he negotiated a $38.8 million economic development agreement with the business.

The Pope County Quorum Court subsequently experienced turnover among its members in the last election, and the current body immediately issued a resolution in opposition to any casino coming to Pope County.

Gulfside and Cherokee Nation Businesses were two of five applicants for the license.

"CNB appreciates the Supreme Court's decision on this important matter. We want to thank Pope County Judge Ben Cross and the community at large for their faith and unwavering support," Chuck Garrett, CEO of Cherokee Nation Businesses, said in an email Thursday. "Our team is extremely excited to deliver the world-class Legends Resort & Casino and bring jobs and economic growth to the River Valley.

"We also look forward to delivering on the $38.8M Economic Development Agreement executed with Pope County, which will allow communities to invest in police, fire and other infrastructure projects while the casino resort is under construction. It is our sincere promise to replicate the success we have achieved in other markets by working cooperatively with state and local officials to make our project a success on day one."

Cross said in a statement that the Supreme Court decision was a welcome one.

"The ruling begins to put some finality into what has beleaguered Pope County for three years now," Cross said. "While Pope County emphatically voted down Amendment 100, nevertheless, the statewide constitutional amendment passed into law and bound the office of County Judge to certain constitutional requirements, regardless of personal sentiment."

Russellville Mayor Richard Harris said the ruling is "considerable" in deciding which casino operator will ultimately do business in the community.

"While I remain opposed to a casino in Pope County, as do the majority of citizens in Pope County based upon the election results over the last three years, the rule of law dictates the situation at this time," Harris said. "I want to encourage the citizens of Arkansas to seek out and sign a petition that is being put forward to remove Pope County from the Arkansas Constitution Casino Amendment."

It's unclear what is next for the Pope County gaming license.

Scott Hardin, spokesman for the state Department of Finance and Administration, which oversees the Racing Commission, referred questions to the Arkansas attorney general's office as the commission's legal counsel.

"We anticipate the commission will be meeting following issuance of the mandate to determine next steps," Hardin said.

Amanda Priest, a spokesperson for Attorney General Leslie Rutledge, said the office was awaiting the mandate and "in the interim will be discussing today's decision with our clients to determine the next step."

"I know CNB is ready to put an end to litigation and start building. We anticipate CNB's license will be issued as soon as the mandate is effective, and we will work quickly to bring final resolution to any remaining lawsuits," McDaniel said. "Once the last legal hurdles are cleared, CNB will deliver the $38.8 million check committed in the Economic Development Agreement with Pope County and commence construction."

The Arkansas Supreme Court has 18 days to issue a mandate to the lower court ordering the case reversed and dismissed.

Gulfside can file a petition for a rehearing before the mandate is issued.

State Supreme Court rulings on matters of state law are final and cannot be appealed to a higher court.

Harris said the community will have to wait for Cherokee Nation Businesses' application to work its way back through the Racing Commission.

"Once a decision is made and if a new license is issued to CNB, my office will work to ensure that the City of Russellville and CNB do what is best for the citizens of Russellville," Harris said.

Fox had ruled in May that the state Racing Commission rule and Arkansas Code Annotated 23-117-101(b) -- both of which require that the endorsements come from local officials in office at the time of application for a license -- added an extra requirement to Amendment 100 to the Arkansas Constitution.

The amendment was approved by voters in 2018 to authorize the expansion of gambling operations at racetracks in Hot Springs and West Memphis into full-fledged casinos. It also allowed the Racing Commission to issue one casino license each in Jefferson and Pope counties. The question of which company should be awarded the Pope County casino license has been contentious for years.

Amendment 100 does not stipulate when the endorsements have to be dated or submitted.

The gambling operations in Hot Springs and West Memphis have all undergone significant expansions, while Saracen Development LLC, a wholly owned company of the Quapaw Nation, holds the Jefferson County gaming license.

Saracen Casino Resort is open and operating in Pine Bluff.

Wood opined that it was "rules of grammar" and "not rhetoric" that guided the court's decision.

Amendment 100 said a casino applicant must have a letter of support from "the" county judge.

"This court interprets that to mean one must be an applicant to obtain the letter of support," Wood said in the opinion. "No conflict exists between the Act and the Amendment. The truest proof is that one could remove the language that offends the dissent, 'at the time the application is submitted,' yet it would not alter our interpretation of the Amendment. This is because 'the' and 'applicant' remain constant."

Baker wrote that Amendment 100 grants and "mandates" rule-making authority to the state Legislature and the Racing Commission.

Furthermore, the Racing Commission's rules in Section 2(b) uses the present participle "applying," to modify "entity,' meaning an entity is not a casino applicant until the application process commences," Baker said.

"Once an entity became a casino applicant in May 2019, it had to obtain a letter of support from 'the county judge.' Ark. Const. amend. 100, § 4(n)," Baker said in the opinion. "Here, the use of the definite article 'the' before 'county judge' indicates a specific, definite judge, the current county judge -- not a former county judge or retired county judge -- because those are not 'the' county judge. Our prior cases support this plain reading of the Amendment."

The answer to the question of whether Amendment 100 requires that the letter of support be issued by the county judge who holds office at the time of the applicant's submission is simple, Hudson wrote in her dissenting opinion.

"No, it does not," she said. "No such requirement is found in the text of the amendment."

Hudson said this opinion of the plain reading of Amendment 100 was widely accepted until late 2018 and early 2019.

She reiterated that the Racing Commission met on Dec. 26, 2018, to consider the rules and the commission attorney said that the letters of support from government officials "shall be dated after the deadline of the effective date of the Amendment."

The proposed rules produced from that meeting included the requirement that any letters received by officials after the amendment's effective date would be accepted.

Gulfside's letters of support were submitted to the commission by Dec. 31, 2018.

On Jan. 3, 2019, the Racing Commission changed the proposed rules to say that the letters of support must be dated and signed by the government officials in office "at the time of the submission of an application for a casino gaming license."

On Feb. 5, 2019, a legislative attorney for the Bureau of Legislative Research sent an email to the Racing Commission's legal counsel warning that the new language seemed to be in conflict with Amendment 100. The Racing Commission attorney, Byron Freeland, responded that the changes resulted from meetings with attorneys from the Department of Finance and Administration and Gov. Asa Hutchinson's office.

"Disturbingly, it was only after Gulfside submitted its letters that the Racing Commission's interpretation changed," Hudson said in the opinion. "In essence, the goalposts were moved after the game began. This is patently unfair."

Webb said her "textualist approach easily resolves the issue on appeal without having to torment the word 'the' to summon the text of Amendment 100 into an unnecessary technicality."

"The text of Amendment 100 at issue in this case is clear -- all that is required is a letter of support from the county judge," Webb said. "The county judge is the person elected by the people who acts as the chief executive officer of county government. Ark. Code Ann. § 14-14-1101 et seq. There is only one county judge at a time in a county in Arkansas. Id. At no point are there two county judges in a given county."