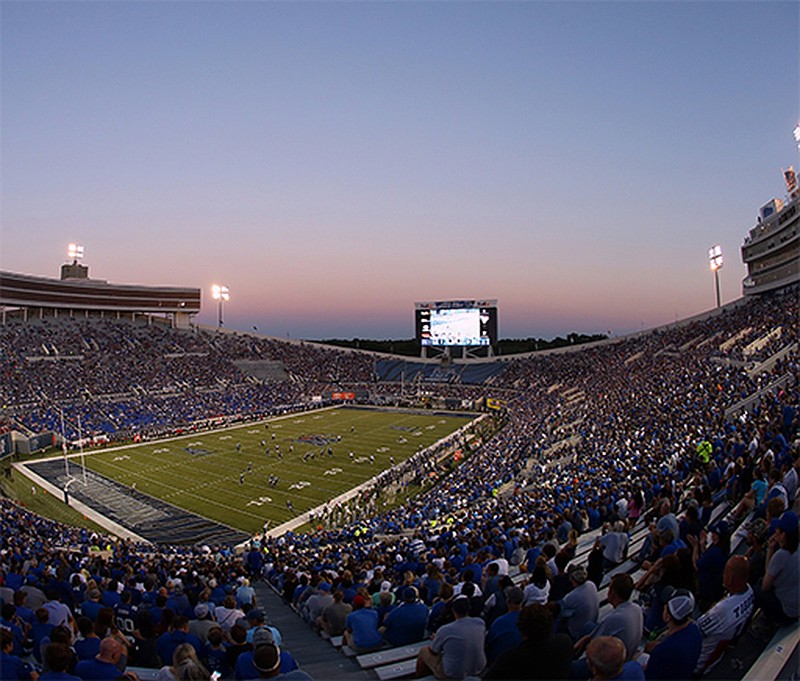 Liberty Bowl Stadium in Memphis will now be Simmons Bank Liberty Stadium after Simmons Bank reached a deal with the city. The stadium is currently home to the University of Memphis football team, the Southern Heritage Classic and the AutoZone Liberty Bowl. (Special to the Commercial)

Simmons Bank announced Thursday that the new name of Liberty Bowl Stadium in Memphis will be Simmons Bank Liberty Stadium.

Earlier this month, Simmons announced, in partnership with the city of Memphis, that it was in advanced negotiations, subject to the execution of a definitive agreement, to be the title sponsor of Liberty Bowl Memorial Stadium.

"Although history would suggest the use of the original name, Memorial Stadium, the incredible support of Memphians in favor of using the word 'Liberty' in the name of the stadium has resulted in a new name for the stadium – Simmons Bank Liberty Stadium," said George A. Makris Jr., chairman and CEO of Simmons.

"The feedback we received, especially from veterans, was that 'Liberty' more broadly recognized the service and sacrifice of our veterans by remembering why they served so faithfully – to preserve our liberty," Makris added.

Opened in 1965 as Memphis Memorial Stadium, the stadium serves as a tribute to the veterans of World War I, World War II and the Korean War. Renamed Liberty Bowl Stadium in 1975, the stadium is the home to the University of Memphis football team, the Southern Heritage Classic and the AutoZone Liberty Bowl. The stadium also hosts a variety of other events, such as concerts, family shows, band competitions and corporate events.

To further recognize the service and sacrifice of the military, veterans and their families, Simmons also announced a $110,000 commitment to the Woody Williams Foundation, a charitable nonprofit organization dedicated to raising public awareness to honor, recognize and serve Gold Star Families and relatives whose loved one died while protecting freedom. The donation will be used for construction and endowment of the Liberty Park Gold Star Families Memorial Monument.

"Words cannot express our appreciation in knowing that Liberty will be retained as part of the new stadium name," said Trish Sorce, co-chairperson of the Liberty Park Gold Star Families Memorial Monument Committee.

John D. Santi Sr., founder of MFO USA and co-chairperson of the Liberty Park Gold Star Families Memorial Monument, added, "To have Simmons Bank reach out to our organization and make such a generous commitment is truly amazing. We are excited to have Simmons Bank part of the project and a stronger part of our community."

Hershel "Woody" Williams served in the Battle of Iwo Jima with the 21st Marines, 3rd Marine Division. During the battle, Williams displayed devotion to duty and service above self as he enabled his company to reach its objective. His actions, commitment to his fellow service members, and heroism were recognized on Oct. 5, 1945, when he received the Congressional Medal of Honor from President Truman. Now 98 years old, Williams is the sole surviving Marine from World War II to wear the Medal of Honor.

To date, Williams and his foundation are responsible for establishing 88 Gold Star Families Memorial Monuments across the United States, with more than 79 additional monuments underway, covering all 50 states and Guam.