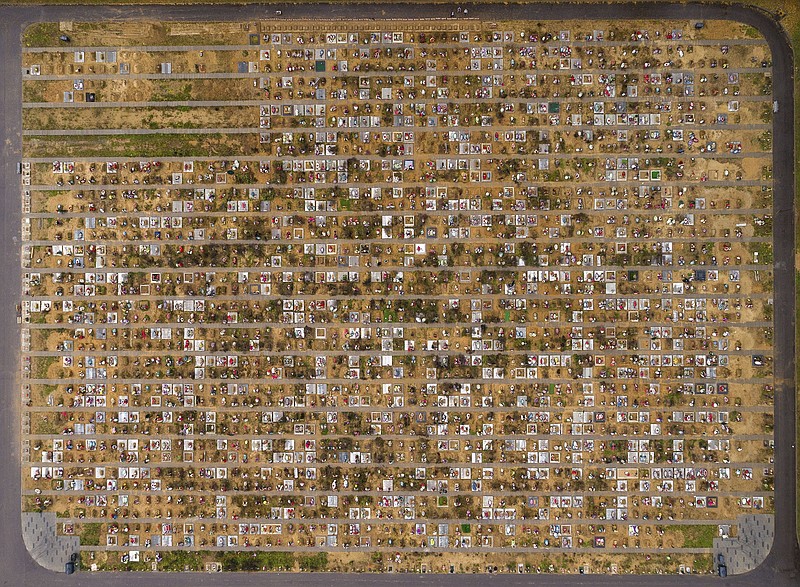 An aerial view Thursday shows fresh graves at the Yastrebkovskoe cemetery outside Moscow, one of the burial grounds for those who have died from the coronavirus. Russia’s death toll rose to 227,389 Thursday, by far the highest in Europe. (AP/Dmitry Serebryakov)

MOSCOW -- Restaurants, movie theaters and many retail stores in Moscow will be closed for 11 days starting Oct. 28, along with other new restrictions, officials said Thursday, as Russia recorded the highest numbers of coronavirus infections and deaths since the pandemic began.

The government coronavirus task force reported 36,339 new infections and 1,036 deaths in the past 24 hours. That brought Russia's death toll to 227,389, by far the highest in Europe.

Russia was the first country in the world to authorize a coronavirus vaccine, launching Sputnik V in August 2020, and has plentiful supplies. But citizens have been reluctant to get it.

President Vladimir Putin, who was vaccinated with Sputnik V earlier this year, said Thursday "there are just two options for everyone -- to get sick or receive a vaccine."

Asked if Russia could make vaccines mandatory, Putin said he believes they should remain voluntary.

[Video not showing up above? Click here to watch » arkansasonline.com/1022rucovid/]

"I believe we mustn't force it but persuade people and prove to them that vaccination is better than illness," he told a panel with foreign policy experts. "We must try to increase people's trust in the government's actions. We need to be more convincing and prove it by example. I hope we will succeed."

He responded to the rising infections and deaths by ordering Russians to stay off work from Oct. 30 to Nov. 7, when the country already is observing a four-day national holiday, and Moscow Mayor Sergei Sobyanin followed up by introducing new restrictions in the capital, starting even earlier.

Gyms, cinemas and other entertainment venues, as well as most stores will close in Moscow from Oct. 28 to Nov. 7, along with kindergarten classes and schools.

Restaurants and cafes will only be open for takeout or delivery orders during that period. Food stores and pharmacies can stay open.

Access to museums, theaters, concert halls and other venues will be limited to those holding digital codes on their smartphones to prove vaccination or past illness, a practice that will remain in place even after Nov. 7.

Most state organizations and private businesses, except for those operating key infrastructure and a few others, will halt work in the 11-day period, Sobyanin added.

Earlier this week, he said unvaccinated people over 60 will be required to stay home except for brief walks and open-air exercise. He also told businesses to keep at least a third of their employees working remotely for three months starting Monday.

"The situation in Moscow is developing according to the worst-case scenario," Sobyanin wrote on his blog, adding that the number of infections in the capital is nearing all-time highs.

Russia's daily infections have been surging for weeks and mortality numbers topped 1,000 for the first time last weekend amid low vaccination rates, lax public attitudes toward taking precautions and the government's reluctance to tighten restrictions. Only about 45 million Russians -- roughly one-third of its nearly 146 million people -- are fully vaccinated.

Some critics have blamed the slow pace of vaccination on conflicting signals from authorities. While extolling Sputnik V and three other domestic vaccines, state-controlled media often criticized Western-made shots, a message that many saw as feeding doubts about vaccines in general.

Russia is still waiting for the World Health Organization to approve Sputnik V.

On Thursday, WHO formally restarted the process to approve the vaccine for emergency use -- a process that had been put on hold for months because of legal procedures to secure the agreement of the Russian Direct Investment Fund that bankrolls the vaccine to WHO rules and procedures.

Dr. Mariangela Simao, a WHO assistant director-general for medical products, didn't specify when a possible approval would come for an emergency use listing for Sputnik V. She said WHO expects to receive in the next two weeks additional data on the vaccine, such as technical and clinical data, manufacturing practices and quality management systems.

Russian authorities believe the order to keep people off work should help limit the spread of the virus by keeping them out of offices and off public transportation, where mask mandates have been widely ignored. The government also urged local authorities to tighten their own restrictions during the period.

In some regions where the situation is even more threatening, Putin said the nonworking period could start as early as Saturday and be extended past Nov. 7.

After imposing a nationwide lockdown early in the pandemic, the government has balked at them since then, for fear of hurting the economy and sapping Putin's popularity. Authorities have instead allowed regional authorities to decide on local restrictions.

Many of Russia's 85 regions already have restricted attendance at large public events and introduced the digital codes for access to restaurants, theaters and other venues. Some have made vaccinations compulsory for certain public servants and people over 60.

But Moscow had avoided such restrictions until now, and crowds have flocked to its restaurants, movie theaters, nightclubs and karaoke bars. Authorities have avoided restrictive measures until now, partly because the capital's health care system has more resources than other regions.

"The experience shows that nonworking days are the most effective way to reduce contagion and deaths," he said.