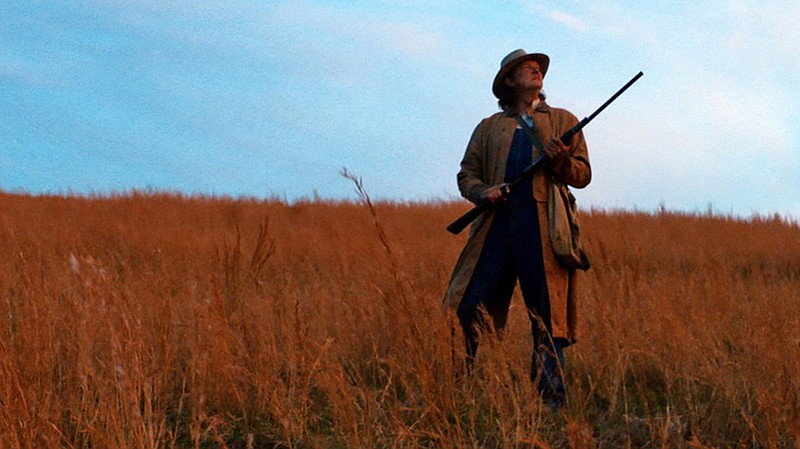 A stoic Oklahoma rancher with a mysterious and violent past (Tim Blake Nelson) brings home a wounded man — and myriad problems — in the old school Western “Old Henry.”

Tim Blake Nelson is a wonderfully versatile actor who's probably known best for playing quirky hayseeds with names like Delmar and Buster. These roles are always fun and it's hard not to love Nelson's thick pronounced hillbilly drawl and his homely backwoods veneer. But there's more to the 57-year-old Okie's repertoire than playing whimsical yokels and his new film "Old Henry" certainly proves that.

Written and directed by Potsy Ponciroli and premiering last month at Venice, "Old Henry" is a lean and old-fashioned Western made by someone with a clear affection for the many classics of a bygone era. Ponciroli doesn't offer much new to the well-worn genre and he happily embraces some its most necessary tropes. But there is a unique and appealing minimalism in his storytelling, and there's a lot to love about how simplicity is woven into the very story itself.

"Old Henry" is a perfect vehicle for Nelson who falls right into the skin of the film's titular lead character. Set in 1906, the story takes place in the waning days of the Old West. Henry (with his weathered skin and out-of-control handlebar mustache) is a man from a dying era, content to live out his days raising his petulant teenage son Wyatt (Gavin Lewis) on his small farm tucked away in the Oklahoma Territory.

Following the death of his wife from tuberculosis 10 years earlier, the overprotective Henry has worked hard to teach Wyatt how to live off the land. While his son is anxious to experience the bustle of the rapidly changing world, Henry argues in favor of the quiet simpler life -- working the crops, feeding the stock, etc. "You'll find there's worse arrangements," he says with a seasoned confidence. Henry knows the world. He has history with it. And that history is what pushed him to settle on such a remote patch of rocky land.

But that simple life is interrupted one cloudy afternoon when a horse with a bloody saddle wanders into their field. Henry sets out to find the rider, following a trail that leads him to a dried-up creek bed. There he finds a man with a gunshot wound (Scott Haze) lying next to a satchel filled with cash. Knowing that bags full of money often come with violent attachments, Henry's first thought is to ride away. But his conscience gets the best of him. He slings the stranger over the back of his horse and takes him to his farmhouse, stashing the bag of money in a secret compartment in the wall of his closet.

And then along comes those attachments. Three black hats ride up to Henry's farm looking for the wounded mystery man. The smooth-talking leader introduces himself as Sheriff Sam Ketchum (played well and with plenty of swagger by Stephen Dorff) and the other two (Richard Speight Jr. and Max Arciniega) as his deputies. Meanwhile back inside the house, the slow-healing stranger says his name is Curry and insists that he's actually the sheriff and Ketchum and his men are bandits. And just like that the movie's central tension is defined.

Secrets often play big parts in movies like these and "Old Henry" certainly has its share. Once Ponciroli gets all of his key pieces in place, it becomes clear that everyone has something to hide. From there it's all about unpacking the many questions. The most urgent -- Who is Ketchum? Who is Curry? Both claim to be the law and both have conflicting stories that don't quite add up. But the biggest secret simmers in plain sight -- just who is Henry and what's this old baggage from his past that he has worked so hard to bury?

Ponciroli moseys through the lightly breaded revelations with an Old West elegance, building toward the inevitable explosion of violence. Storywise it's all pretty easy to figure out save for the one big twist that the movie teases early (for those paying close attention) and then unloads with a fun and satisfying fury. Meanwhile, DP John Matysiak's evocative camera works well within the film's mostly single setting, capturing both the ruggedly handsome countryside and rustic lived-in interiors.

"Old Henry" touches on a number of themes: father/son relationships, regret, our fascination with legend, the idea of your past always catching up to you. But it's Nelson's performance that is the movie's bread and butter. Precise and economical, the veteran character actor conveys so much with so little. Not a line of dialogue is wasted and every word he speaks seems shaped by the experiences of a life hard lived. And to Nelson's credit, he often says just as much through his somber and weary eyes.

Early in the movie Henry admits to his son "I've done things I wish I could take back. Things you have no business hearing." At first listen, it's a line of dialogue almost as common to the Western genre as Stetsons and six-shooters. Yet Blake utters those words and we buy them without a second's hesitation all because of his restrained down-to-earth magnetism. It's what makes this fairly familiar story into something Western fans won't want to miss.

Available On Demand through most streaming providers