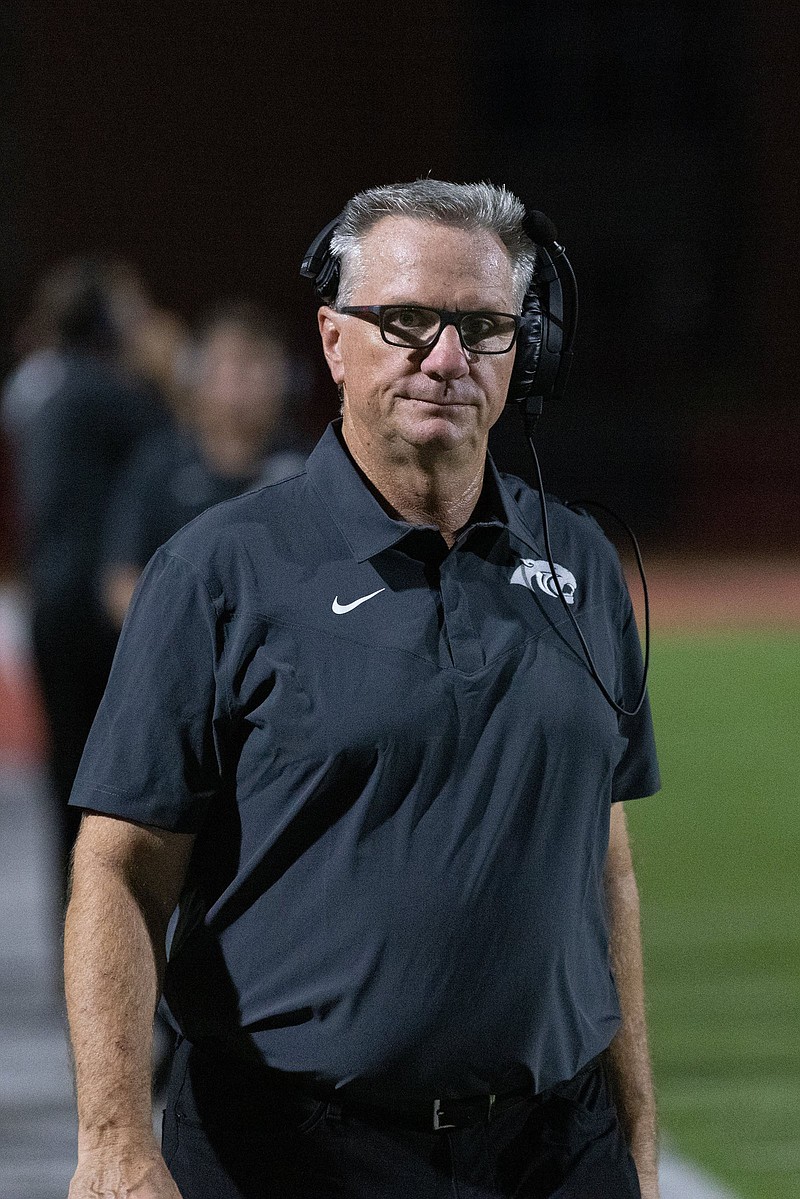 Coach Scott Reed’s Cabot Panthers have lost their last five games against the Bryant Hornets, four of which were by at least 27 points. (Arkansas Democrat-Gazette/Justin Cunningham)

NOTEWORTHY Bryant's last conference loss on Oct. 26, 2018, was also the last time the Hornets were beaten by a team from Arkansas. ... Cabot has lost its last five games with Bryant, four of which were by at least 27 points. ... Bryant quarterback Carson Burnett has completed 20 of his past 25 passes for 362 yards and 7 touchdowns. ... Grant Freeman has thrown at least two touchdown passes in every contest this season for Cabot. ... The Panthers' Braden Jay is second in the state in receiving yards with 943.

LITTLE ROCK CENTRAL AT NO. 2 CONWAY

NOTEWORTHY Conway has beaten Little Rock Central nine consecutive times, all by double figures. ...The Tigers' last won a game against the Wampus Cats in 2007 (21-14). ... Quarterback Donovyn Omolo had his streak of tossing at least two touchdowns end at five games last week in their 23-21 victory vs. No. 10 Fort Smith Northside. Instead, he rushed for two scores against the Grizzlies, including the eventual game-winner . ... Central has scored 13 points total over its past four games. ... The Tigers can possibly still make the playoffs with wins in two of their final three games.

NO. 10 FORT SMITH NORTHSIDE AT NO. 3 NORTH LITTLE ROCK

NOTEWORTHY North Little Rock owns a seven-game winning streak over Northside, not to mention a 45-7 pasting last season. ... Grizzlies quarterback Walker Catsavis was held to season lows for completions (4) and passing yards (44) last week in a loss to No. 2 Conway. He also threw a season-high two interceptions. ... Seven days after passing for only 58 yards against Little Rock Southwest, Malachi Gober threw for 213 yards and 3 touchdowns in a 42-7 blowout of Little Rock Catholic. ... Jiquori Stewart and Johnny Lewis have 11 touchdown catches combined for the Charging Wildcats.

NOTEWORTHY Familiarity won't be an issue for these two because they've played one another six times in the previous three seasons. ... Pulaski Academy has won four games by an average of 42 points since it lost to Lipscomb (Tenn.) Academy on Sept. 10. ... Little Rock Christian is coming off a bye week. ... Running back Jayvean Dyer-Jones has carried 138 times for 910 yards and 10 touchdowns for the Warriors. ... Six players have caught at least 14 passes for the Bruins, led by Jaylin McKinney's team-leading 48 receptions.

NO. 5 FAYETTEVILLE AT SPRINGDALE

NOTEWORTHY Fayetteville has owned this long-time rivalry as of late by winning 12 games in a row and 14 of the last 15. ... Springdale quarterback Landon Phipps had thrown for 787 yards with 4 touchdowns and rushed for 683 yards and 9 scores. ... Four Fayetteville players have run for 150 yards or more each, with Omar Murray leading the way with 402 yards. ... Springdale is tied for the final playoff spot in the 7A-West with Fort Smith Southside. Those teams will play in the regular-season finale.

NO. 7 BENTONVILLE AT ROGERS

NOTEWORTHY Rogers was beaten 74-21 in last year's meeting and has dropped 14 consecutive games in the series. The Mounties' previous victory over the Tigers was in 2006, 41-35. Rogers eventually reached the state title game that year. ... Bentonville had its 35-game 7A-West win streak snapped last week by No. 5 Fayetteville. ... Josh Ficklin (Bentonville) and Josh Shepherd (Rogers) ranked fourth and fifth in the state, respectively, in rushing. Ficklin has 1,090 yards while Shepherd has 1,025. ... Rogers' Kade Seldomridge has 21 catches for 412 yards and 6 touchdowns.

NO. 8 LAKE HAMILTON AT VAN BUREN

NOTEWORTHY Potential trap game for Lake Hamilton, which has No. 9 Benton and defending Class 6A champ Greenwood in its last two contests. ... Van Buren played, which without its top two quarterbacks last week against Little Rock Parkview, has lost three games in a row after starting the season 4-0. ... Malachi Henry has 873 yards receiving and 10 touchdown catches for the Pointers. ... The Wolves are allowing just 12.1 points per game.

GREENWOOD AT NO. 9 BENTON

NOTEWORTHY A victory by either keeps them in line to potentially win the 6A-West. A lost by Greenwood would essentially knock it out of the conference title race. ... Five of Benton's six wins have been by 29 points or more. ... Casey Johnson has carried 66 times for 469 and Brandon Johnson has run for 454 yards on 55 carries for the Panthers. ... The Bulldogs have four players with more than 250 yards receiving each. Aiden Kennon has a team-high 544 yards on 35 catches. ... Greenwood has beaten Benton in six of the past seven meetings.