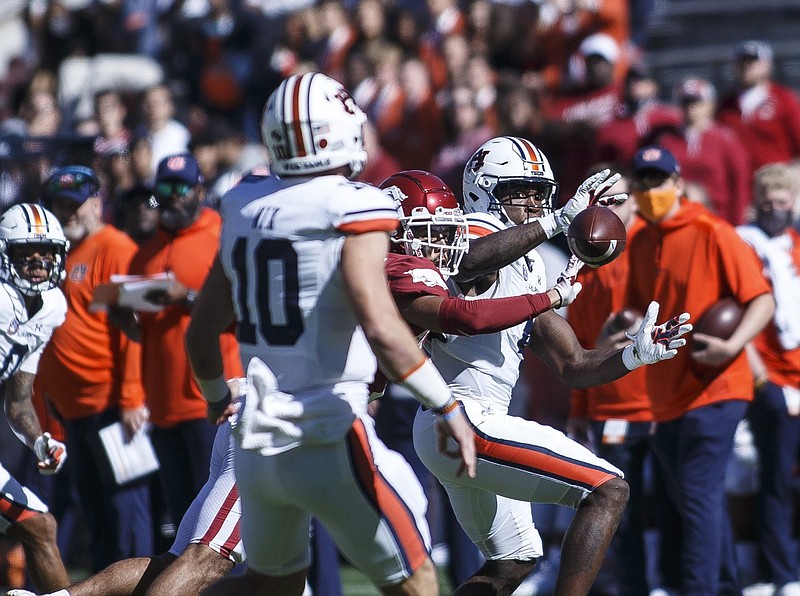 Arkansas sophomore defensive back Myles Slusher breaks up a pass intended for Auburn running back Tank Bigsby during last Saturday’s game in Fayetteville. Slusher is one of several younger players taking more prominent roles in the Razorbacks’ defensive backfield. (Special to the NWA Democrat-Gazette/David Beach)

FAYETTEVILLE -- The loss of ace safety Jalen Catalon and recent play in the secondary has caused the University of Arkansas coaches to take a hard look at their defensive backfield.

The result appears to be expanding roles for a number of younger players as the Razorbacks (4-3) prepare to host Arkansas-Pine Bluff (1-5) on Saturday at 11 a.m. at War Memorial Stadium in Little Rock.

Veteran cornerbacks and cousins from Ashdown Montaric Brown and LaDarrius Bishop have run with the first unit this week as usual along with senior safety Joe Foucha. But the guys they're bracketing are younger, taller and in position to take more snaps this weekend.

Sophomore Myles Slusher had already been in place, starting in Catalon's stead last week and playing relatively well outside a deep touchdown pass allowed on Auburn's first drive in a 38-23 loss.

Sophomore safety Malik Chavis and true freshman nickel back Jayden Johnson could be in line to start against the Golden Lions based on practice observations this week.

"Absolutely. You guys are at practice and whether you believe it or not we don't try to hold anything from you," Coach Sam Pittman said about the younger defensive backs working with the starters this week. "We've got some big young kids. To me, they're ready to play and no better time than do it now and they'll have a bye week to learn a little bit more about the defense and things of that nature, so yeah I think so.

"You're talking about JJ and Slush [and] Malik. They're all really big, big guys. They look like SEC defensive backs and they run like it too. So we've just got to get them where they're confident. That's what we're trying to do this week."

The changes mostly impact junior safety Simeon Blair, a Pine Bluff High graduate, and junior nickel Greg Brooks Jr., who has been starting since his true freshman season of 2019 and has 27 career starts.

"They certainly have been in the rotation as well this week," Pittman said. "Once a young guys starts catching up to an older guy then you've got to put him in there, see if he can pass him or if he can't.

"We're going to play a bunch of those guys anyway, so it really doesn't mean anything to Greg or Simeon. It just means we feel like these guys are getting closer and closer to them and we'd like to see them play in the game."

Blair said he thinks the potential increase in playing time for the younger defensive backs is good for them.

"It's great experience and we have a lot of depth," Blair said. "We pride ourselves on being as good as the person that's in the lineup at that time, so if you're on the field, you have a chance to make that play and I'm very confident in every defensive back and every position we have, even if it's a younger guy. They're going to do their job. That's how we play. That's what we do."

Pittman said plays made earlier in the year in coordinator Barry Odom's schemes just haven't been made in recent games.

"Sometimes we haven't touched them. Those were not happening early in the year, so I don't know if it's the player, fatigue or if we're just taking bad angles. But sometimes your depth, you know, we're not quite there yet, but we're working on it."

Giving younger defensive backs more action this week is a way of forcing the issue on depth.

Pittman said the coaching staff is expecting Slusher can take on an expanded leadership role directing traffic in the manner of Catalon, who took over that role in the secondary last year.

"We're hoping Slusher does that," Pittman said. "We're hoping one of those. Obviously Simeon Blair when he's in there, he's able to do that.

"But we're hoping Slush kind of takes over that spot of doing that. Because JJ's young and if Slush isn't in there, it'll probably be Malik. We're feeling like those guys can do that as well. ... If you remember last year against LSU when Jalen went out, we at times looked a little bit confused back there. I don't think that'll be the case now. We've got guys that are older. At least a year older than what they were last year, and of course Slush played a lot of ball last week too."

The last few weeks have been tough on an Arkansas defense that came out of the gates on the good foot.

The Razorbacks kept both No. 15 Texas and No. 7 Texas A&M off track in the first month with heady run blitzing, solid pass coverage and aggressive, sure tackling.

Now the unit is trying to recover physically and emotionally from a series of blows, beginning with the loss of Catalon, who had been playing hurt and less effectively than in 2020, for the season following shoulder surgery.

Several other Razorbacks -- defensive line starters Markell Utsey, Tre Williams and John Ridgeway, linebackers Grant Morgan and Hayden Henry, and the cornerback Bishop among them -- have battled through aches and pains or missed time with their injuries.

Georgia slammed the Hogs' mostly 3-man front for 273 rushing yards, running the ball on 56 of 67 offense snaps. Ole Miss piled up 611 total yards, including 324 on the ground, and converted 4 of 5 fourth-down plays. Auburn's offensive execution was nearly textbook as the Tigers rolled up 427 total yards, connected on deep shots and dominated the fourth quarter with a solid run game.

"We're fine. We're fine," Henry said regarding the banged-up defense on Tuesday. "We had our second good practice in a row today and we're getting the game plan ready for UAPB this weekend in Little Rock."

The Golden Lions present a modern run-pass option offense that has experienced some injuries and has not been as productive as in the spring when they won the SWAC Western Division crown. UAPB averages 126.5 rushing yards and 197.5 passing yards behind dual-threat quarterbacks Skyler Perry and Xzavier Vaughn. Tailback Kierre Crossley has rushed for 252 yards and five touchdowns and receivers Josh Wilkes, Dalyn Hill and Daemon Dawkins all have 200-plus receiving yards.

"They're a very athletic group," Blair said. "They have great speed with their receivers. ... They play both quarterbacks. They have great arms. They can both hit you with the read-option game. I feel like we're just going to make sure that we do our job with our 11 on the field on defense." 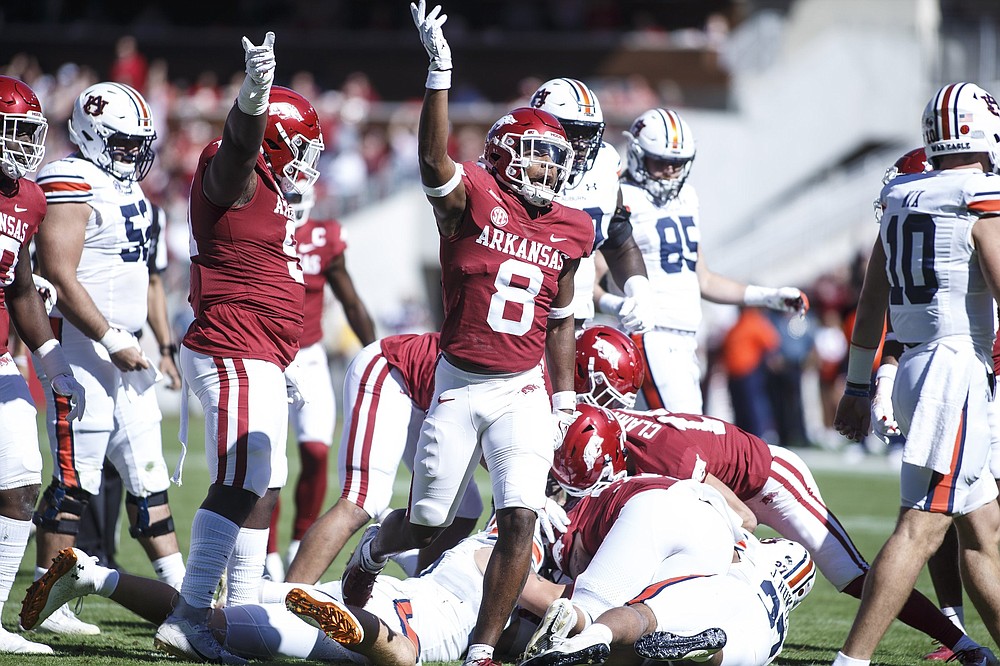 Arkansas’ Jayden Johnson (8), a true freshman nickel back, could be in line to make his first collegiate start Saturday when the Razorbacks take on Arkansas-Pine Bluff at War Memorial Stadium in Little Rock. (Special to the NWA Democrat-Gazette/David Beach)