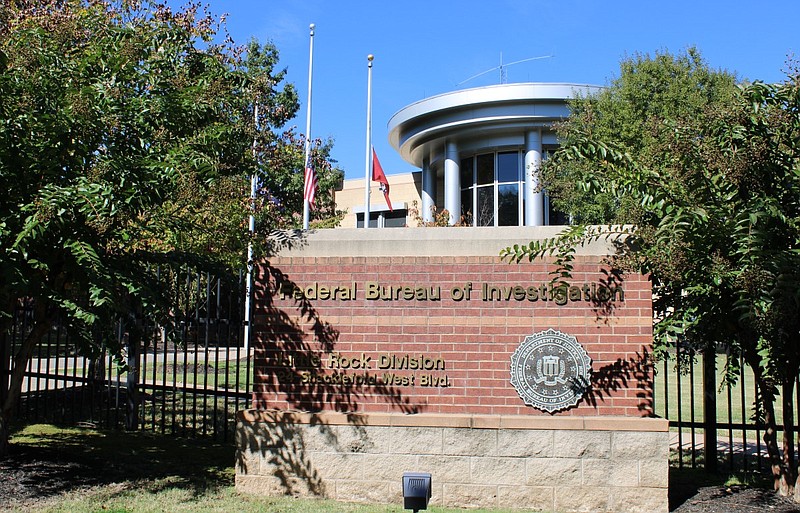 The Little Rock Division of the Federal Bureau of Investigation, or FBI, is shown Thursday, Oct. 21, 2021. (Arkansas Democrat-Gazette/Grant Lancaster)

Little Rock FBI agents and law enforcement leaders from across the state met Thursday to address the rising threat of violence directed at officers of the law, which FBI data suggests has already surpassed previous years nationally.

The talk came less than a week after a Fort Smith officer was hospitalized Sunday after being attacked with an edged weapon while trying to stop a man from beating his 15-year-old son. The officer shot and killed the man, but the boy died and another person was found dead in the man's house.

Discussion centered on preliminary data from the FBI's Law Enforcement Officers Killed and Assaulted program, which tracks yearly deaths and injuries -- accidental and criminal -- across the country.

As of Oct. 1, the program has logged 54 criminal killings of officers, passing the 41 felonious deaths reported by this time last year as well as 2020's total of 46, according to the data released.

Of the five years represented, only 2018 had a higher criminal death toll, 57, but that year saw only 5o such deaths by this time in the year, leaving room for 2021 to exceed it in deadliness.

Violence against police has increased as the state has seen a surge in violent crime this year, but in Arkansas it has been "disproportionately high," said Jim Dawson, FBI special agent in charge of the Little Rock office.

In July, two State Police troopers were fired on during traffic pursuits, with another person using a pistol with a 50-round drum magazine to open fire on a trooper in September, said Col. Bill Bryant, the agency's director.

Little Rock Assistant Police Chief Wayne Bewley said there is "no question" that there has been an uptick in attacks on police, pointing to the prevalence of guns in the country and state as the main factor in violent crime directed at both police and citizens.

Guns were used in 43 of the 54 officer killings so far this year, FBI data shows. Vehicles made up the next largest category, with six used as weapons to kill police.

Bewley and other agency leaders pointed to straw purchases -- when someone buys a gun for someone who could not buy one legally, such as a felon -- as one source of weapons, but primarily to vehicle thefts. It is incredibly easy for thieves to find unlocked cars in neighborhoods, and guns are frequently left inside, Bewley said.

In an effort to combat the problem, the DEA has seized more than 342 firearms as part of drug operations in the state this year, said Jarad Harper, assistant special agent in charge.

Little Rock police alone have seized 622 illegally owned weapons as of Oct. 17, according to a weekly department report.

Federal agencies like the FBI, DEA and the Bureau of Alcohol, Tobacco, Firearms and Explosives help city and county agencies investigate violent crime with technological assistance such as ballistics databases to track firearms used in crimes.

Aside from the effects of widespread gun possession, police leaders suggested cultural change was at play in the surge in violence, with more people having negative perceptions of law enforcement.

The arrival of officers at a crime scene used to be "a calming agent," said North Little Rock's Capt. Brian Dedrick, but now can worsen situations.

A prevailing narrative that police are not professional has made this the worst time to be in law enforcement, Bewley said. Despite this, he said he thinks that "a silent majority" still support police and their work.

Leaders pointed to community engagement as a solution to this break in trust and, hopefully, an answer to the violence problem. Fort Smith officers often work in neighborhoods viewed as hot spots for crimes, handing out meals and building rapport, said Eric Mitchell, the agency's public affairs officer.

"It's not always about enforcement," Mitchell said.