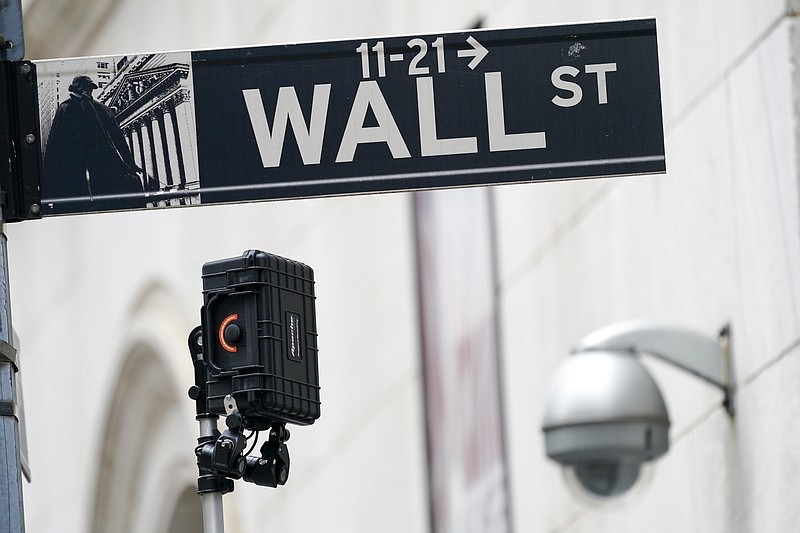 FILE - A Wall Street sign is seen next to surveillance equipment outside the New York Stock Exchange, Tuesday, Oct. 5, 2021, in New York. Stocks are off to a mostly lower start on Wall Street Thursday, Oct. 21, 2021 a day after the S&amp;P 500 and the Dow Jones Industrials approached the record highs they set this summer. (AP Photo/Mary Altaffer)

A wobbly day of trading on Wall Street left the major stock indexes mostly higher Thursday, nudging the S&P 500 to an all-time high.

The benchmark index bounced back from an early slide to rise 0.3%, its seventh-straight gain. The S&P 500 eclipsed the record it set Sept. 2 and is on pace for its third-straight weekly gain.

The Nasdaq also recovered from a sluggish start, adding 0.6%. The Dow Jones Industrial Average ended barely in the red for the day, weighed down by a steep drop in IBM. The blue-chip index is just below its all-time high set on Aug. 16.

A mix of companies that rely on direct consumer spending led the gains. Tesla rose 3.3% after reporting encouraging third-quarter profits, despite parts shortages and shipping delays.

The uneven finish came as investors continued reviewing the latest company earnings reports, with global supply chain problems and the impact from rising inflation a key focus. Many companies have warned that the supply chain issues and overall higher costs will hurt operations, and Wall Street is trying to gauge just how much those factors will sting corporate profit growth and margins.

Companies seem to be managing those higher costs and encouraging investors who had been uncertain in a very choppy market for weeks, said Sam Stovall, chief investment strategist at CFRA.

"Investors were willing to rotate rather than retreat while they waited for better news to take bigger and longer-term positions," he said.

Wall Street is also concerned that rising inflation will force more companies to raise prices on goods, which could result in lower consumer spending and a stalled economic recovery.

IBM slumped 9.6%, the biggest decline in the S&P 500, after reporting quarterly revenue that fell shy of analysts' forecasts.

WeWork rose 13.5% in its second attempt to become a publicly traded company. The company, which provides shared work spaces, had a spectacular collapse during its first attempt to do so two years ago and is emerging after the pandemic closed millions of square feet of office space.

Shares in a special-purpose acquisition company that is planning on taking public a new media company launched by former President Donald Trump soared after news of the venture broke late Wednesday. Digital World Acquisition vaulted 356%. The company, which went public Sept. 8, has merged with Trump Media & Technology Group, which plans to launch a social media app and streaming video service.

Outside of earnings, investors received an encouraging update on the labor market. The Labor Department reported that the number of Americans applying for unemployment benefits fell last week to a new low point since the pandemic erupted.