OPINION | REVIEW: 'The Harder They Fall' is stylish and moving 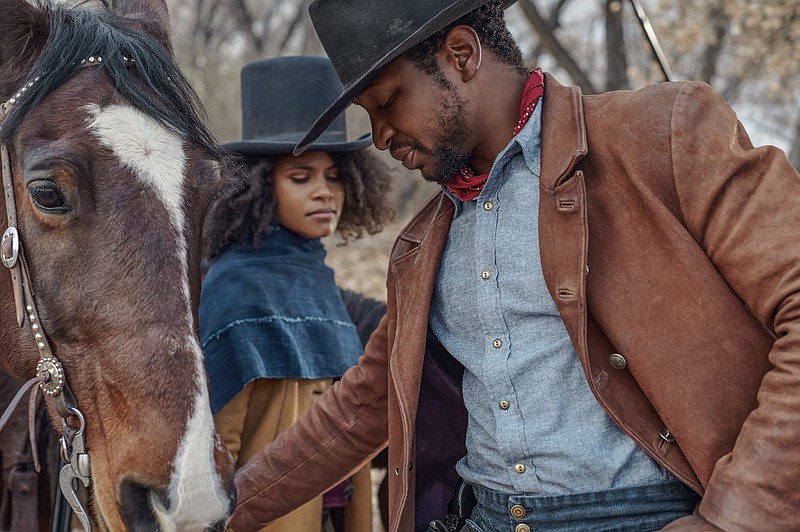 Historical characters Stagecoach Mary Fields and Nat Love are played by, respectively, Zazie Beetz and Jonathan Majors in “The Harder They Fall,” Netflix’s highly fictionalized re-telling of the rampage of the Rufus Buck gang in the Indian Territory of the Arkansas-Oklahoma area in 1895.

It's good to see Hollywood is still making Westerns now and again. There aren't as many as I'd like, but the last few years have churned out some good titles. And "The Harder They Fall" certainly earned a spot on that list.

The 2016 remake of "The Magnificent Seven" was unnecessary, but it ended up being a decent movie. And "The Sisters Brothers" was pretty darn good. Quentin Tarantino saw fit to bless the world with two Westerns in the last decade with "Django Unchained" and "The Hateful Eight." Both were fantastic films.

Now Netflix comes along with a Western that boasts swagger, tunes, drama, and finely crafted performances. It's movies like this that make me scoff when I hear that streaming movies will never be as good as stuff that lands in the theater. Horse manure!

"Snake Eyes" went to theaters, but I definitely wouldn't call it a good movie. Netflix doesn't always churn out the best films, but I'll be damned if I'm gonna let folks slander its original films as a collective pile of disappointments. "The Old Guard," "The Ballad of Buster Scruggs," "The Mitchells vs. the Machines," I could go on and on listing amazing films that went straight to Netflix.

Director Jeymes Samuel helmed a film full of Black historic characters that aren't necessarily used in historic ways. The movie lets you know that immediately. Real people. Fictional story. But Arkansas plays a big part through famous deputy U.S. marshal Bass Reeves (Delroy Lindo) of Fort Smith. He even name drops Fort Smith once or twice, which should put a smile on some Arkie faces. I know it did mine.

"The Harder They Fall" follows Nat Love (Jonathan Majors) who seeks revenge on notorious outlaw Rufus Buck (Idris Elba) for killing his mother and father when he was a boy. Elba is not the hero in this film, but he is a solid villain. I've already seen him make the transition into cowboy in "Concrete Cowboy," and it's just amazing to watch his British accent fade into that of a rough rider of the west.

Majors makes a remarkable protagonist in his own right, channeling as much Denzel Washington in this particular performance as he can.

The film boasts a large cast of gunhands, my personal favorite being Zazie Beetz as Stagecoach Mary. Man alive can that lady sing. I just love watching her perform, whether it's in "Deadpool 2" or "Nine Days."

The setup for this Western isn't anything new. There's horse riding, bank robberies, dynamite-fueled explosions, shootouts, quick-draw duels, and just about everything you could possibly imagine populating a list of classic Western details.

Where this film succeeds is wrapping all those things up in a sleek and styled package. The cinematography in "The Harder They Fall" is just nonstop beauty from wide prairie landscapes to divided camera perspectives as two parties prepare to shoot each other on opposite sides of a door. There's long dramatic zooms and bedazzling angles that left me smiling from ear to ear. Cinematographer Mihai Malaimare Jr. knocked it out of the park.

Then there's this soulful and classic soundtrack full of everything from raw emotional background tracks and spiritual hymns to a dramatic choir echoing in the wind. Not since "Django Unchained" have I heard such a perfectly matched soundtrack for a Western. It was the perfect complement to a stunning cinematic experience.

I called the film's plot twist from a mile away, but I certainly don't think it detracts from the overall movie. There's actually a bit of inescapable poetry to Nate's fate when he realizes exactly what kind of ethical trap Rufus lays for him at the end. It's an inescapable pitfall designed to inflict maximum emotional carnage, while leaving the audience wondering who really won in the end.

If the film has a weak spot, it might be its length. I'm not sure it was necessary to run the story over the 2-hour mark. It's rare for Westerns to need that much time to tell their tale efficiently. "The Hateful Eight" sure as hell didn't need to be 3 hours long.

That's honestly a small complaint for an otherwise flawless movie. It's exciting, it packs a punch, and while it tries to leave the door open for a sequel, it doesn't need one. "The Harder They Fall" needs a continuation about as badly as "The Magnificent Seven" needed three sequels.

The film is in theaters and available on Netflix today, and it's proof Hollywood can and should continue making new Westerns.

‘The Harder They Fall’

Playing theatrically and streaming on Netflix

Print Headline: 'The Harder They Fall': Stylish and moving