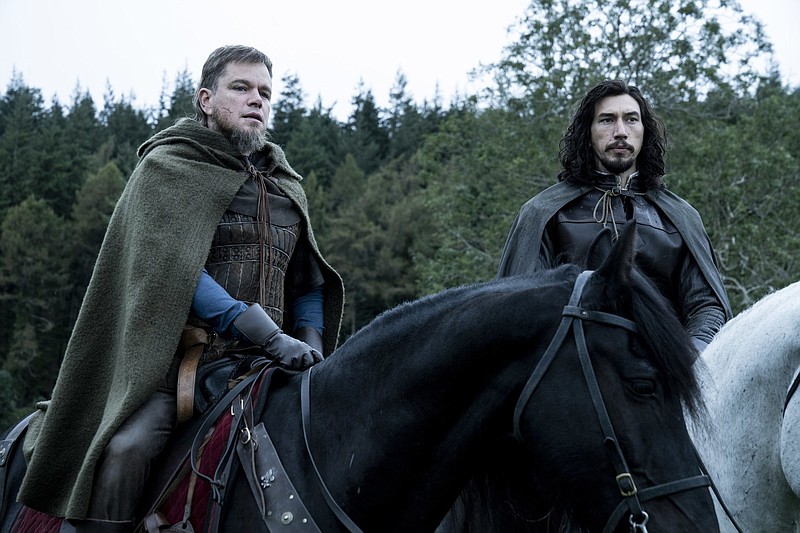 Seen here in happier times, knight Jean de Carrouges (Matt Damon) and squire Jacques Le Gris (Adam Driver) would square off in the last Trial by Combat to occur in medieval France. The story is told in Ridley Scott’s “The Last Duel.”

Editor's note: Second Take is an occasional series about movies that have recently opened in theaters.

Director Ridley Scott isn't letting something trivial like age slow him down. The spry and spirited 83-year-old is ending the year with two star-studded features, "House of Gucci" (coming next month) and this one, "The Last Duel."

It goes without saying that Scott is no stranger to sprawling period epics. His latest fits snugly in his filmography alongside "Gladiator," "Kingdom of Heaven," and 2010's underappreciated "Robin Hood" (I'll happily die on the hill defending that one). It's massive in both scope and scale, it brilliantly re-creates history through some jaw-dropping production and costume design, and it doesn't shy away from the brutality. At the same time, this one has some interesting qualities all its own.

In addition to touting Scott behind the camera, "The Last Duel" sees Ben Affleck and Matt Damon penning a screenplay together for the first time since winning the Academy Award for 1997's "Good Will Hunting." They're joined by Nicole Holofcener, an award winner herself, most recently for 2018's "Can You Ever Forgive Me?". The trio's script is based on Eric Jager's 2004 book about the last recorded Trial By Combat duel which happened in medieval France on Dec. 29, 1386.

Lightly based on the sketchy historical account, the film opens in 1386 Paris where two solemn-looking combatants, Jean de Carrouges (Matt Damon) and Jacques Le Gris (Adam Driver), prepare for a duel to the death. Heavy chain mail is draped over their shoulders. Suits of armor are strapped on piece by piece. Both men look intense and focused; doing their best to hide their apprehension. The two leave their quarters and mount their horses, riding into the center of a small arena where France's King Charles VI (Alex Lawther) presides.

On a nearby platform stands Carrouges' wife Marguerite (Jodie Comer), clad in black from head to toe and with her ankles tightly shackled. An accusation has led to the duel and she knows that the barbaric outcome will determine her fate. This duel between two men, not her own testimony, will decide whether she lives and is vindicated or she's stripped, lashed and burned alive. The physical and psychological grotesquery of the scenario isn't fully felt in the opening. But when we revisit this scene in the final 20 minutes it hits like a ton of bricks.

We learn that Marguerite has accused Le Gris of raping her while her husband was away at war. Le Gris denies the claim, which eventually leads to the eponymous showdown. But what is the truth behind the accusation? What really happened? After the gripping tease, the "Rashomon" effect kicks in and we're treated to three chapters, each beginning with "The Truth According to ...". Scott gives us three tellings of the story, told from the perspectives of Carrouges, Le Gris and finally Marguerite.

Together their stories chronicle events beginning in 1377 and leading right back to the cold and violent day of the duel. Each version of the truth touches on many of the same encounters yet with notable contradictions, some slight but others are glaringly distinct. The wily script gives us plenty to glean from each account, but just as much information comes through the camera. Scott and DP Dariusz Wolski (the director's go-to cinematographer since 2012's "Prometheus") revisit certain scenes multiple times but shoot them from different points-of-view. And as the camera's gaze shrewdly changes from testimony to testimony, new details give us a clearer picture of the truth.

It doesn't take long to figure out the mystery behind what really happened. In fact, the second chapter (the truth according to Le Gris) all but spells it out. Instead we're tasked with figuring out who these characters really are. Along the way we learn how the duelers went from friends to foes. We're shown how Carrouges, a man of war, met and married Marguerite, the daughter of a disgraced landowner. We see Le Gris wiggle his way into the good graces of the powerful and hedonistic Count Pierre d'Alencon (a scene-stealing Ben Affleck). And there's the inevitable ending -- a bruising display of savagery between two men where any semblance of humanity vanishes.

Unruly accents aside, the cast is uniformly superb. Damon steps out of his comfort zone, overcoming a truly hideous mullet to give a brawny yet surprisingly layered performance. Driver portrays his preening entitled opportunist at just the right temperature. And then there's Comer, a talented actress on the rise who navigates her character through an era where misogyny was ingrained in society and issues with women were "matters of property." Comer brings a quiet strength and resiliency to Marguerite, and while not every scene in her chapter rings true, the performance always does.

Scott has long been one of my favorite filmmakers, and it's always fun to see which side of him we're going to get. "The Last Duel" sees Scott in top form. His film is oozing with exquisite period detail, captivating characters, and good old-fashioned storytelling. And Scott's staging of the brutally intense finale visually rivals anything he has done before. It's a talky movie which may surprise some. But it's never a slog, and the relevance of its subject matter packs one wicked wallop. It also makes for a nice alternative to the waves of horror and big franchise films filling the multiplexes.