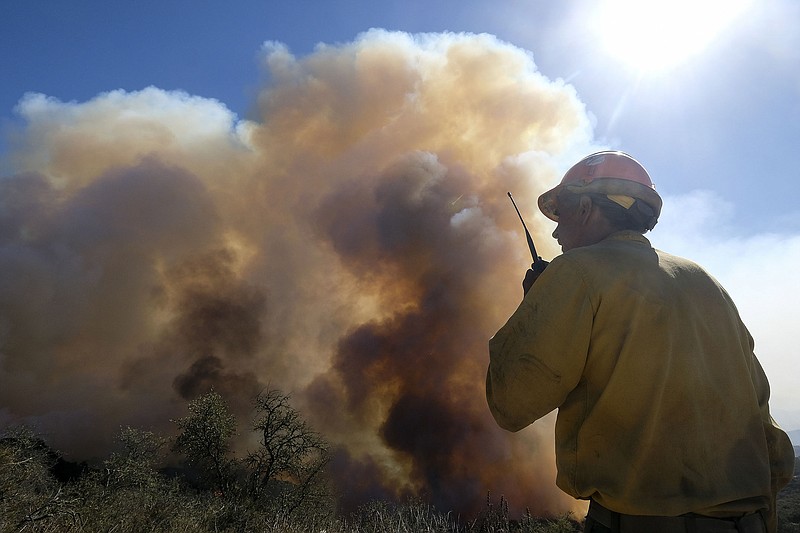 A firefighter monitors a wildfire earlier this month in Goleta, Calif. Worsening climate conditions have led intelligence agencies to develop assessments on the impact of climate change on migration of desperate people forced to leave their homes. (AP/Ringo H.W. Chiu)

WASHINGTON -- The Earth's warming and resulting natural disasters are creating a more dangerous world of desperate leaders and peoples, the Biden administration reported Thursday in the federal government's starkest assessments yet of security and migration challenges facing the United States as the climate worsens.

The Defense Department for years has called climate change a threat to U.S. national security. But Thursday's reports by the departments of Defense and Homeland Security, National Security Council and Director of National Intelligence provide one of the government's deepest looks yet at the vast rippling effects on the world's stability and resulting heightened threats to U.S. security, as well as its impact on migration.

They include the first assessment by intelligence agencies on the impact of climate change, identifying 11 countries of greatest concern, from Haiti to Afghanistan.

Another report, the first by the government focusing at length on climate and migration, recommends a number of steps, including monitoring the flows of people forced to leave their homes because of natural disasters, and working with Congress on a groundbreaking plan that would add droughts, floods, wildfires and other climate-related reasons to be considered in granting refugee status.

The climate migration assessments urge the creation of a task force to coordinate U.S. management of climate change and migration across government, one that would include climate scientists and aid and security officials.

Each year, storms, the failure of seasonal rains and other sudden natural disasters force an average of 21.5 million people from their homes around the world, the U.N. High Commissioner for Refugees reported. Worsening climate from the burning of coal and gas already is intensifying a range of disasters, from wildfires overrunning towns in California to rising seas overtaking island nations to drought-aggravated conflict in some parts of the world.

"Policy and programming efforts made today and in coming years will impact estimates of people moving due to climate-related factors," said the report, one of dozens of climate change assessments that President Joe Biden ordered from federal agencies. "Tens of millions of people, however, are likely to be displaced over the next two to three decades due in large measure to climate change impacts."

The administration is eager to show itself confronting the impacts of climate change ahead of a U.N. climate conference in Glasgow, Scotland, that starts later this month. That's especially so as Biden struggles to get lawmakers to agree to multibillion-dollar measures to slow climate change, a key part of his domestic agenda.

Notably, U.S. intelligence agencies concluded it is probably already too late to keep the warming of the planet at or below the level laid out in the 2015 U.N. Paris climate accord. While that level remains the official goal for the United States and United Nations, many scientists have concluded that the Earth's temperature will rise at least several more tenths of a degree, a level of warming that brings even more damage and threatens some nations' existence.

"Given current government policies and trends in technology development, we judge that collectively countries are unlikely to meet the Paris goals because high-emitting countries would have to make rapid progress toward decarbonizing their energy systems by transitioning away from fossil fuels within the next decade, whereas developing countries would need to rely on low-carbon energy sources for their economic development," the intelligence report said.

The country is already seeing the effects of climate change on migration, with deadly and destructive hurricanes driving migrants to leave their homes in Central America and flee to the United States through Mexico. This has overwhelmed border officials at times since 2014 and particularly during the past six months.

No nation offers asylum or other legal protections to people displaced specifically because of climate change. The United States has the opportunity to change that, which could prompt others to follow suit, refugee advocates said.

The National Security Council released its own report Thursday, looking at how climate change is already pushing people to migrate, both within countries and between them. The report notes one forecast suggesting that climate change could lead to almost 3% of the populations of Latin America, South Asia and sub-Saharan Africa moving within their countries by 2050 -- more than 143 million people.

While the report focuses on climate migration overseas, it notes that some Americans are already moving because of the effects of climate change as well.

The administration said it is not seeking to change international agreements on refugees but rather create U.S. laws that would allow climate change effects to be part of a valid claim for refugee status.

It noted that activists persecuted for speaking out against government inaction on climate change may also have plausible claims to refugee status.

Ama Francis, who has been helping the International Refugee Assistance Project find ways to protect climate refugees, applauded the administration's recognition that global warming should be taken into account.

"That's a huge signal from the U.S. government that our refugee and asylum system can protect people right now, which is important because there are thousands of climate-displaced people already on the move, including those showing up at the U.S. border," Francis said.

It's imperative the report turn into legislation that allows climate refugees the ability to resettle in the United States, and not just result in another task force, others said.

Experts in climate migration said the report could have gone further.

Teevrat Garg, an economics professor at the University of California, San Diego, who specializes in climate migration, welcomed the administration's attention to the issue. But he said the report could have addressed the deeper question of what the United States and other developed countries owe to climate migrants.

"Much of the carbon emissions driving climate change have come from rich nations, but the consequences are being borne disproportionately by the poor," Garg said. As a result, wealthy countries have "an obligation to support climate refugees."

According to the intelligence assessment, a warming planet could increase geopolitical tensions particularly as poorer countries grapple with droughts, rising seas and other effects, while they wait for richer, higher-polluting countries to change their behavior. Climate change will "increasingly exacerbate risks to U.S. national security interests," according to the estimate.

Strains on land and water could push countries further toward conflict. In South Asia, much of Pakistan relies on surface water from rivers originating in India. The two countries are nuclear-armed rivals that have fought several wars since their founding in 1947. On India's other side, about 10% of Bangladesh's 160 million people already live in coastal areas vulnerable to rising seas and saltwater intrusion.

The intelligence community needs more scientific expertise and to integrate climate change into its analysis of other countries, the officials said.

Information for this article was contributed by Julie Watson, Ellen Knickmeyer, Nomaan Merchant and Seth Borenstein of The Associated Press; and by Christopher Flavelle, Julian E. Barnes, Eileen Sullivan and Jennifer Steinhauer of The New York Times.