2 firms report vaccine solid in use for kids 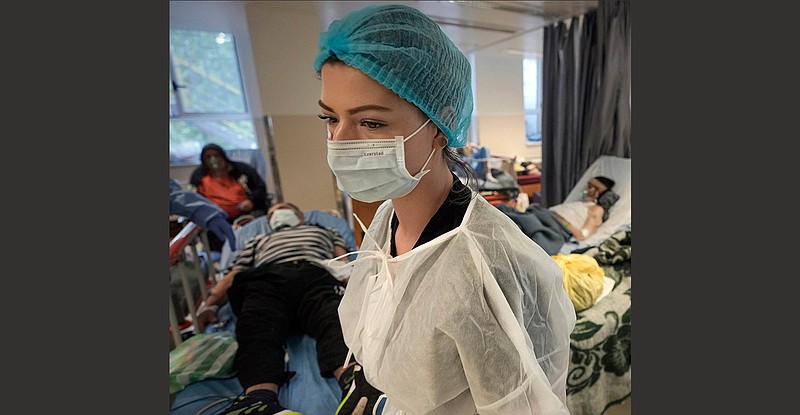 A member of the medical staff walks Friday in a crowded covid-19 isolation room at the University Emergency Hospital in Bucharest, Romania. In Romania, a European Union country of around 19 million people, only 35% of adults are fully inoculated against covid-19 compared with an EU average of 74%. (AP/Vadim Ghirda)

Pfizer and its German partner BioNTech reported that their coronavirus vaccine is 91% effective in children 5-11 years old in documents posted Friday ahead of a meeting next week at which experts are scheduled to debate whether the shots are safe and effective.

The all-day meeting Tuesday will inform the Food and Drug Administration's decision on one of the remaining questions for the pandemic. The authorization of a vaccine for school-aged children would open coronavirus vaccine eligibility to an estimated 28 million children in the United States and represent a turning point in the nation's effort to control the virus.

The vaccination campaign is anticipated to launch as early as the first week of November, after the Pfizer-BioNTech shot clears key steps.

A decision by FDA regulators is expected in the days after Tuesday's advisory committee meeting. Advisers to the Centers for Disease Control and Prevention, who recommend how vaccines should be used, are scheduled to meet Nov. 2 and 3.

The Biden administration has purchased enough kid-size doses -- in special orange-capped vials to distinguish them from adult vaccine -- for the nation's 5- to 11-year-olds.

[Video not showing up above? Click here to watch » arkansasonline.com/1023kidsvax/]

The White House has drawn up a plan for distributing vaccine to pediatrician's offices, pharmacies, hospitals and other sites. Federal health officials project that in the first week, 15 million doses of the two-shot regimen will be shipped.

Unlike older people, most children are not at high risk of severe covid-19 infections. But at least 637 have died of the disease, according to CDC data. With the start of the school year coinciding with the dominance of the highly transmissible delta variant, about a quarter of the coronavirus infections reported in recent weeks in the United States have been in children.

"Last year, when we had lower rates of covid in children, we kept kids at home and we refused to put them into schools, and they suffered tremendously. I'm really glad schools opened, but we are seeing high, high rates: 41 kids died last month," said Kawsar Talaat, a vaccine researcher at Johns Hopkins Bloomberg School of Public Health who is a principal investigator for the Pfizer-BioNTech pediatric trial. "If there's a way to stop that, we should use everything we have."

Dr. Sonja Rasmussen, a University of Florida professor of pediatrics and epidemiology, called Pfizer's data "really reassuring" and predicted the FDA and CDC will sign off on the shots.

She said it was encouraging to see that the vaccine was effective with a one-third dose. That reduces the chance of sore arms, fever and other mild effects that can occur with any immunization, Rasmussen said.

"I don't see any red flags here that would have people concerned," said Rasmussen, who wasn't involved in the research. The results are good news for "so many families out there that are waiting to have the vaccine before the holidays."

More than 25,000 pediatricians and primary care providers already have signed up to get the shots into children's arms.

[Video not showing up above? Click here to watch » arkansasonline.com/1023cdcterm/]

Tests of the Pfizer-BioNTech vaccine in younger children are following close behind, and data are expected before the end of the year -- first on children between 2 and 4 years old, and then on children as young as 6 months.

The vaccine regimen for 5- to 11-year-old children is two shots, each one-third the dose given to adults and teens, and administered three weeks apart. There were 2,268 children originally in Pfizer's trial, two-thirds of whom received the real shots with the rest receiving a placebo. After regulators asked the company to increase the trial size, partly to increase its safety database, the total size of the trial was doubled to about 4,500 children.

No cases of heart inflammation, called myocarditis, were reported in the trial. That rare side effect has been associated with the vaccine, particularly in younger males, and typically resolves after a few days.

Pediatricians are anticipating a variety of responses from parents and families once the vaccine becomes available. There will likely be an initial surge in demand. But vaccine hesitancy may be an even bigger issue for younger children.

Talaat said she hoped pediatricians, trusted health care providers who have often known children since birth, would help persuade families, particularly those who are in the middle -- not clamoring for a vaccine, but not opposed to one either.

"The vaccine just allows us that one extra level of safety to keep our kids in school and keep them healthy and to keep classes from shutting down," Talaat said.

In another piece of encouraging news, the CDC reported earlier this week that even as the delta variant surged over the summer, Pfizer vaccinations were 93% effective at preventing hospitalizations among 12- to 18-year-olds.

Pfizer's study of younger children found the low-dose shots proved safe, with similar or fewer temporary side effects such as sore arms, fever or achiness that teens experience.

Moderna also is studying its covid-19 shots in elementary-school-age youngsters. Pfizer and Moderna are studying even younger children as well, down to 6-month-olds. Results are expected later in the year.

Information for this article was contributed by Carolyn Y. Johnson and Dan Keating of The Washington Post; and by Lauran Neergaard, Matthew Perrone and Lindsey Tanner of The Associated Press.

Print Headline: 2 firms report vaccine solid in use for kids