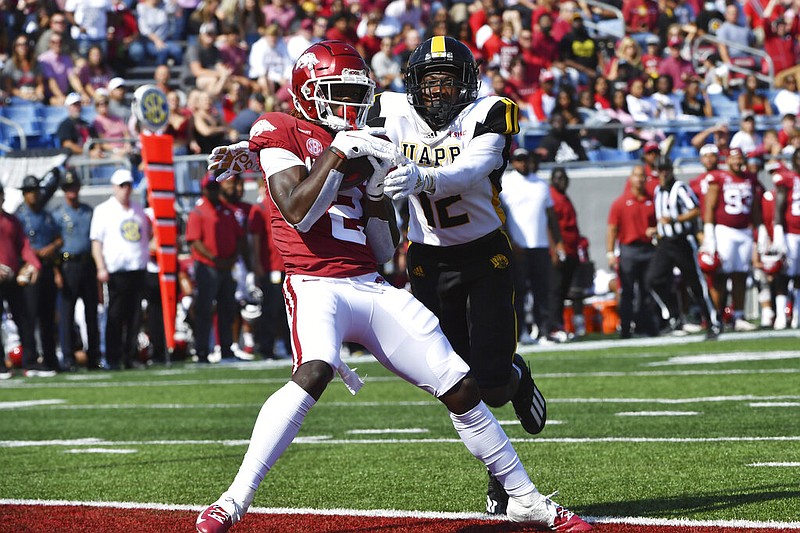 Arkansas receiver Ketron Jackson Jr. (2) makes a touchdown catch in front of University of Arkansas-Pine Bluff defensive back Nathan Seward (12) during the first half in Little Rock on Saturday, Oct. 23, 2021. (AP/Michael Woods)

The Arkansas Razorbacks’ first game against an in-state opponent in 77 years was as one sided as the last.

UAPB kicker Zack Piwniczka connected on a 32-yard field goal with 6:34 remaining in the fourth quarter to deny Arkansas its first shutout since 2018.

The Razorbacks (5-3) snapped a three-game losing streak heading into their only bye week of the season.

“It was (a big deal) for our coaching staff, to sit in there at halftime and going, ‘We did what we said we were going to do, we did what we needed to do,'" Arkansas coach Sam Pittman said.

Arkansas had not played another team from the state since Dec. 2, 1944, when the Razorbacks beat Arkansas A&M (now Arkansas-Monticello) 41-0 in Fayetteville. Saturday’s game was the first between Arkansas and UAPB, who are scheduled to play again in Little Rock to open the 2024 season.

The Razorbacks scored on six of their eight offensive possessions in the first half. Arkansas’ Nathan Parodi also returned a punt 80 yards for a touchdown midway through the second quarter to put the Razorbacks ahead 31-0.

“The whole team was as excited as I’ve seen in a long time when Parodi scored," Pittman said. "It was really neat.”

Parodi was the first Arkansas player to return a punt for a touchdown since Joe Adams’ 51-yard return against Kansas State in the Cotton Bowl in January 2012. It was the Razorbacks’ longest punt return since Adams’ 97-yard touchdown against Ole Miss in 2010.

Arkansas quarterback KJ Jefferson threw four touchdown passes in the first half, including passes of 18 and 39 yards to Treylon Burks in the second quarter. Jefferson’s final touchdown was to Burks on fourth-and-4 with one minute remaining before halftime.

Burks also had a 49-yard touchdown run on the first play of the Razorbacks’ second possession to put Arkansas ahead 14-0.

“He was the best guy out there," Pittman said. "Coming into the game we knew...they were going to bring more than we could pick up. We ran a

slant to Burks once on that, obviously beat them deep another time and we handed it to him.

"It’s hard to cover Burks one-on-one and keep him from catching the football.”

Jefferson threw an 18-yard touchdown pass to Blake Kern to cap a 6-play, 65-yard drive to open the game.

Cam Little added a 31-yard field goal and Arkansas led 17-0 at the end of the first quarter.

Jefferson threw three touchdown passes in the second quarter. Ketron Jackson was on the receiving end of a 29-yard touchdown with 2:59 to play before halftime. It was the first touchdown for Jackson, a freshman.

“I was excited for Ketron," Jefferson said. "He got wide open; I didn’t expect him to get that wide open. I was just trying to get him an easy ball that he could catch."

Jefferson, who did not play after halftime, completed 10 of 17 passes for 194 yards, and rushed 3 times for 33 yards.

The Razorbacks primarily played backups in the second half and never threatened to extend their lead. Arkansas had 426 of its 504 yards in the first half.

UAPB (1-6) had a chance to cut into the Arkansas lead twice in the first half, but Piwniczka missed a 37-yard field goal attempt midway through the first quarter and Skyler Perry was intercepted by Myles Slusher in the end zone on third-and-goal from the Razorbacks’ 3 early in the second quarter.

Arkansas safety Malik Chavis intercepted backup UAPB quarterback Xzavier Vaughn after the Golden Lions moved into Razorbacks territory in the third quarter. Chavis returned the interception 77 yards, but most of the return was overturned after replay showed his knee hit the turf near the start of his run.

“We turned the ball over too much," UAPB coach Doc Gamble said. "We had some great chances, but we get another shot at these guys in a couple years so we’ll learn from today’s loss and build from it.”

Sam Pittman was the 17th Arkansas coach — including interims — to bring a team to War Memorial, but only the seventh Razorback coach to win his debut there. War Memorial is not scheduled to host another Arkansas game until the 2023 season opener against Western Carolina.

The Razorbacks are scheduled to play again Nov. 6 against Mississippi State in Fayetteville.

“Coach Pittman talked about (winning) starting today," said Arkansas linebacker Bumper Pool, who had a team-high eight tackles. "Getting this win after all of the hard work we put in this week and after the tough three-week stretch, we’re excited moving forward with the season.”