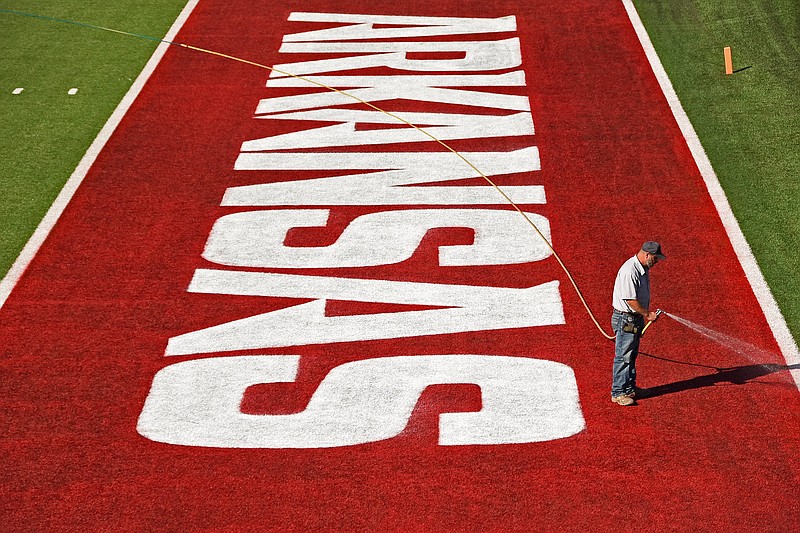 A worker sprays down the end zone Friday morning while preparing War Memorial Stadium for today’s college football game between the Arkansas Razorbacks and the University of Arkansas at Pine Bluff Golden Lions. This is the Razorbacks’ first in-state opponent since 1944. (Arkansas Democrat-Gazette/Staci Vandagriff)

Simmons Bank is in negotiations for naming rights to the field at War Memorial Stadium in Little Rock, the Pine Bluff bank said in an announcement with state officials Friday.

The 54,120-person stadium in midtown Little Rock would see some renovations under Simmons Bank's sponsorship, the news release said.

"War Memorial Stadium has a rich history as a sports and entertainment venue that honors our state's veterans," said Stacy Hurst, director of the Arkansas Department of Parks, Heritage and Tourism, the agency under which the stadium is housed. "With the support of Simmons Bank, we will be able to make sure that the stadium remains a state treasure for many years to come."

The stadium was built in 1948 and is a tribute to Arkansans who died in military service during both world wars. It hosts a variety of events ranging from concerts to football games, including today's matchup between the University of Arkansas Razorbacks and the University of Arkansas-Pine Bluff Golden Lions. The Razorbacks have not faced an in-state opponent in football since 1944, when they defeated Arkansas A&M College, now UA-Monticello.

AT&T held naming rights to the field under a $1.8 million contract from 2010 to 2020, but the stadium retained the name War Memorial at the behest of local veterans groups.

"We have established a strong partnership with Simmons Bank and look forward to enhancing the stadium to continue to provide a world-class venue for the community and our visitors to enjoy," War Memorial Stadium Commission Chair Kevin Crass said in the news release.

Simmons Bank is also in the process of acquiring naming rights to Liberty Bowl Memorial Stadium in Memphis and will change the name to Simmons Bank Liberty Stadium. Planned additions to the stadium include a 227,000-square-foot sports and events center.

Bank spokesperson Ashley Leopoulos said Simmons Bank's endeavors at both stadiums are "part of our community involvement across our six-state footprint."

Today's game at War Memorial kicks off at 11 a.m. As of Friday afternoon, about 40,000 tickets had been sold, University of Arkansas athletics spokesman Kevin Trainor said.

The golf course near the stadium will open at 6:30 a.m., and non-reserved tailgating will be on a first-come, first-served basis, said Monika Rued, public information officer for Arkansas State Parks.

There will also be a free "pre-game fan-fest" from 8-10:30 a.m. outside the stadium, featuring food trucks, live music and children's activities, Rued said.

The Razorbacks play at War Memorial Stadium once a year, but Trainor and Rued said this year's game is special and both University of Arkansas system schools are well aware of it.

"I think it certainly will mean a lot for both institutions and for the state," Trainor said. "There will be a little something extra-special on Saturday with that history."

UA's longstanding policy dates back to athletic directors John Barnhill and Frank Broyles to preserve UA as the state's flagship school. The directive continued through Jeff Long's 10-year run as athletic director from 2008-17.

The Hogs have slowly started scheduling in-state schools across several sports under current athletic director Hunter Yurachek. UA and UAPB have faced off in baseball and women's basketball for the past three years.

During halftime today, the schools' marching bands will stage a joint performance in addition to their individual shows, Rued said.

"They're really showing points of pride and unity between the two system schools in this historic matchup," she said.

After the game, the River Market Entertainment District in downtown Little Rock will have a "fifth quarter" celebration from 4-7 p.m., featuring games, shopping and live music. From 5 p.m.-midnight, anyone 21 or older will be allowed to carry alcoholic beverages throughout the district with designated cups and wristbands.

Stickyz Rock'n'Roll Chicken Shack is one of the participating venues, owner Suzon Awbrey said, and will have live music on the patio as well as on the main stage.

"With the Little Rock games, it's always a very busy time for us, so we don't expect anything less," Awbrey said.