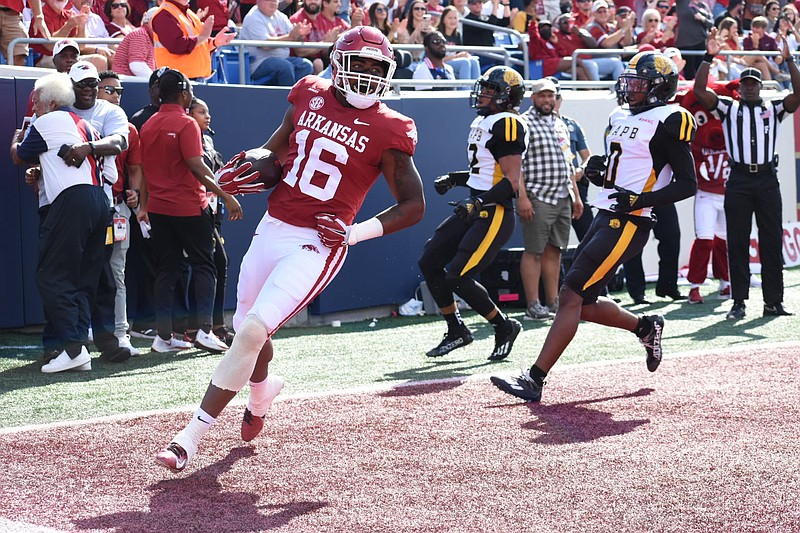 LITTLE ROCK – Warren High School graduate Treylon Burks took a handoff from K.J. Jefferson on Saturday, and then he turned on the proverbial afterburners.

The second drive of the game for the University of Arkansas lasted just one play – Burks’ 49-yard dash for a touchdown. That was one of the junior wide receiver’s three touchdowns, and it was a small example of the Razorbacks’ ability to overpower the University of Arkansas at Pine Bluff in a 45-3 victory Saturday before an announced crowd of 42,576 at War Memorial Stadium in Little Rock.

The game was historic because Arkansas (5-3) played an in-state opponent for the first time since 1944 and hosted a program from one of its sister campuses. While the Southeastern Conference’s Razorbacks snapped a three-game losing streak, the Southwestern Athletic Conference’s Golden Lions (1-6) saw their skid extend to six games.

“We didn’t show up just happy to be here,” UAPB Coach Doc Gamble said. “We showed up here expecting to win the football game. The guys here made some plays. We’ve just got to make some plays more often.”

Arkansas took slightly more snaps, totaling 504 yards on 63 plays while holding UAPB to 223 yards on 59 plays. Burks caught four passes for 89 yards and two touchdowns (18 and 39 yards) and rushed twice for 56 yards, including his early jaunt that broke the game open.

Burks has collected four receiving touchdowns in the past two weeks and has seven on the season. The 49-yard TD rush was the first of his career.

Skyler Perry took the majority of the Lions’ snaps, going 7 for 18 for 107 yards with an interception. He was sacked twice.

Xzavier Vaughn completed 1 of 4 passes for 5 yards with a pick in relief.

Perry’s longest completion was for 42 yards to freshman Daemon Dawkins on a drive that ended in a missed Zack Piwniczka field goal attempt from 37 yards out.

That was one sign UAPB had not gotten over its season-long struggle to score in the red zone. Myles Slusher picked off Perry in the end zone on third-and-goal from the Hogs’ 3.

The Lions began both of those drives recovering a Razorback fumble.

“We’ve just got to execute,” Gamble said. “It’s one thing you do it in practice, but it’s not happening in the game. You have to find new ways and understand what you can do better.

“We can’t throw the ball away in field of play. Throw it away out of bounds on the sideline.

It also didn’t help UAPB that Arkansas’ Nathan Parodi returned a punt 80 yards for a touchdown with 6:50 left before halftime.

Gamble said the stage was not too big for the Lions, who didn’t seem fazed by the sea of red in Arkansas’ first Little Rock game in two years. UAPB’s crowd, most of whom occupied front rows in the southeast corner of the 54,120-seat stadium, adhered to a Twitter call for a “blackout.”

“Playing in the SWAC, we’ve played in some good venues,” Gamble said. “The stage wasn’t too big. It was about us.”

The previous season-high attendance at a UAPB game was 12,341 at Alabama State University on Oct. 9. Last week’s homecoming game against Southern University drew 11,964.

The teams agreed to two 12-minute quarters for the second half, which UAPB won after Piwniczka sent a 32-yard field goal through the uprights with 6:34 left in the game.

Gamble found some positives to take away from the lopsided defeat, in which the Lions at one point trailed 45-0.

“The character of our football team; there’s never any quit with us,” he said. “The defense, coming in after the second half, we didn’t come into the locker room down. Coach [and defensive coordinator Jonathan] Bradley gave them a spirited speech at halftime. It probably wasn’t needed but it was great at the time and it showed the second half. It showed we have talent and great football players. A ton of guys usually contributing for us with injuries were on the sideline.”

The Lions played “a lot more stingy” on defense in the second half after giving up the four passing touchdowns by Jefferson. Even after trailing 14-0, they made some stops in Arkansas’ passing attack, with cornerback Nathan Seward earning two of the Lions’ four pass breakups.

K.J. Jefferson completed 10 of 17 passes for 194 yards and four touchdowns, with Blake Kern and Ketron Jackson Jr. on the receiving end of the other scores.

Then again, UAPB’s defense ran into more issues in stopping the run.

The Razorbacks ran for 291 yards Saturday, led by Dominique Johnson’s 91 on six carries. A week earlier, Southern ran for 304 on UAPB.

Crossley transferred to UAPB after graduating from the University of Central Arkansas, taking on his old team Sept. 18. Taking on the state flagship university’s team in between those campuses carried extra meaning to the native Texan.

“It was a very big deal for me, being in Arkansas the last four to five years,” Crossley said. You hear a lot about them, whether you’re in Conway or Pine Bluff.”

The Lions lined up against a “very disciplined” Hog defense, Crossley said, although UAPB held the ball for 36 minutes, 18 seconds, compared to Arkansas’ 23:42.

“They’re way bigger than we normally play in size,” Crossley said. “We just tried to adjust with the game.”

Burks, the former Lumberjack who now has 14 career receiving touchdowns.

UAPB returns to SWAC play to take on Texas Southern University next Saturday in Houston. Kickoff is set for 2 p.m. and the game will air on AT&T SportsNet.

Arkansas will host Mississippi State in Fayetteville. The game time and network is yet to be announced.