Drought-hit California gets rain, but residents urged to conserve 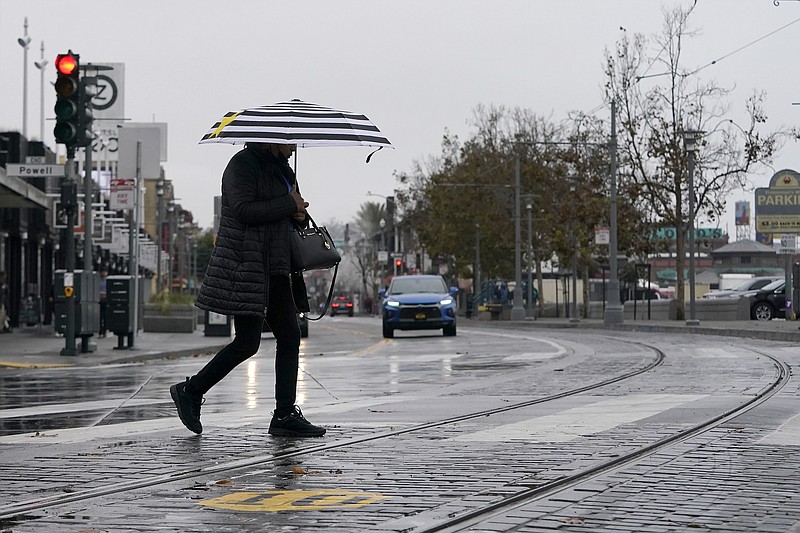 A pedestrian carries an umbrella while crossing a street at Fisherman's Wharf in San Francisco, Wednesday, Oct. 20, 2021. Showers drifted across the drought-stricken and fire-scarred landscape of Northern California on Wednesday, trailed by a series of progressively stronger storms that are expected to bring significant rain and snow into next week, forecasters said. (AP Photo/Jeff Chiu)

SACRAMENTO, Calif. -- Moderate to heavy rain fell across Northern California on Friday, heading into a weekend expected to see increasingly stormy weather for the drought-stricken state while also raising concerns about flash flooding in vast areas scorched by wildfires.

A flood warning was posted in part of Siskiyou County bordering Oregon, where "local law enforcement reported debris flow and flooding on roadway from excessive runoff," according to the National Weather Service's office in Medford, Ore.

Californians rejoiced this week when big drops of water started falling for the first time in any measurable way since the spring, an annual soaking that heralds the start of the rainy season after some of the hottest and driest months on record.

But as the rain was beginning to fall Tuesday night, Gov. Gavin Newsom issued a statewide drought emergency and gave regulators permission to enact mandatory statewide water restrictions if they choose.

Newsom's order might seem jarring, especially as forecasters predict that up to 7 inches of rain could fall on parts of the Northern California mountains and Central Valley this week. But experts say it makes sense if you think of drought as something caused not by the weather, but by climate change.

For decades, California has relied on rain and snow in the winter to fill the state's major rivers and streams in the spring, which then feed a system of lakes that store water for drinking, farming and energy production.

But that annual runoff from the mountains is getting smaller, mostly because it's getting hotter and drier, not just because it's raining less.

In the spring, California's snowpack in the Sierra Nevada mountains was 60% of its historical average. But the amount of water that made it to the reservoirs was similar to 2015, when the snowpack was just 5% of its historical average. Nearly all of the water state officials had expected to get this year either evaporated into the hotter air or was absorbed into the drier soil -- a dynamic playing out across the arid Western U.S.

"You don't get into the type of drought that we're seeing in the American West right now just from ... missing a few storms," said Justin Mankin, a geography professor at Dartmouth College and co-lead of the Drought Task Force at the National Oceanic and Atmospheric Administration. "A warm atmosphere evaporates more water from the land surface [and] reduces [the] amount of water available for other uses, like people and hydropower and growing crops."

Increasingly strong storms are expected to spread throughout California through the beginning of next week.

"By Saturday night, a rapidly intensifying Pacific cyclone directing a powerful atmospheric river squarely at the West Coast delivers a fire hose of rich subtropical moisture into California," the National Weather Service said. "Snow levels will be low enough to blanket the Sierra Nevada in heavy snow on Sunday while prolonged periods of rain soak the coast and valleys of northern and central California."

Precipitation will then spread into Southern California on Monday.

The rain has helped contain some of the nation's largest wildfires this year, including a fire that threatened the Lake Tahoe resort region this summer.

Officials said Wednesday night that the fire is now 100% contained after storms covered the western side of the blaze with snow, while rain fell on the eastern side.

The state is expecting so much snow that Mammoth Mountain Ski Area near Yosemite National Park announced that it would open for the season two weeks early on Oct. 29. But the amount of snow and rain amounts to just a drop in the bucket for California's changing climate.

California's "water year" runs from Oct. 1 to Sept. 30. The 2021 water year, which just ended, was the second-driest on record. The one before that was the fifth-driest on record. Some of the state's most important reservoirs are at record low levels. Things are so bad in Lake Mendocino that state officials say it could be dry by next summer.

Even if California were to have above-average rain and snow this winter, higher temperatures mean it still likely won't be enough to make up for all the water California lost. Last year, California had its warmest ever statewide monthly average temperatures in June, July and October 2020.

Jeanine Jones, interstate resources manager for the California Department of Water Resources, said people should not think about drought "as being just this occasional thing that happens sometimes, and then we go back to a wetter system."

"We are really transitioning to a drier system so, you know, dry becomes the new normal," she said. "Drought is not a short-term feature. Droughts take time to develop, and they usually linger for quite some time."

Water regulators have already ordered some farmers and other big users to stop taking water out of the state's major rivers and streams. Mandatory water restrictions for regular people could be next.

In July, Newsom asked people to voluntarily reduce their water use by 15%. In July and August, people cut back 3.5%. On Tuesday, Newsom issued an executive order giving state regulators permission to impose mandatory restrictions, including banning people from washing their cars, using water to clean sidewalks and driveways, and filling decorative fountains.

State officials have warned water agencies that they might not get any water from the state's reservoirs this year, at least initially. That will be very challenging, said Dave Eggerton, executive director of the Association of California Water Agencies.

But he said he believes Californians will start to conserve more water soon with the help of a statewide conservation campaign, which will include messages on electronic sign-boards along busy highways.

"It's going to happen," he said. "People are starting to get the message, and they want to do their part." 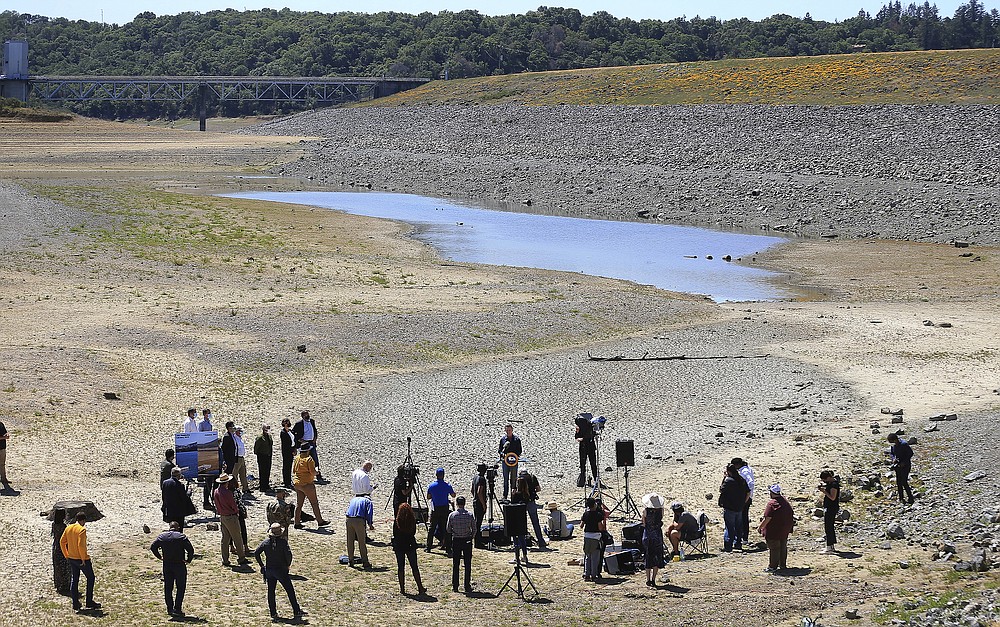 FILE - In this April 21, 2021, file photo, California Gov. Gavin Newsom holds a news conference in the parched basin of Lake Mendocino in Ukiah, Calif., where he announced he would proclaim a drought emergency for Mendocino and Sonoma counties. Much of California is seeing the first heavy rain of the season this week. But that didn't stop Gov. Gavin Newsom from expanding a drought emergency declaration to the entire state and giving regulators permission to enact mandatory water restrictions. (Kent Porter/The Press Democrat via AP, File)