IN THE GARDEN: Elephant ears don't always bloom, but provide extra enjoyment when they do 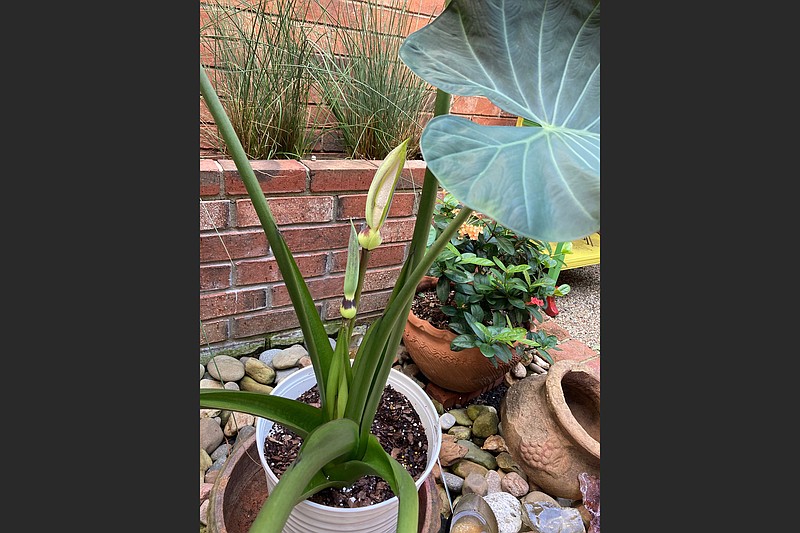 Elephant ears are prized for their foliage, but they can bloom, too. (Special to the Democrat-Gazette)

Q My elephant ears have produced at least two blooms in recent weeks. I wasn't aware that elephant ears would bloom until these appeared (a nice surprise!). Is blooming very common?

A Elephant ears and caladium bulbs are grown for their showy foliage and some years never produce a bloom. Other years, they produce their spathe-like flowers in abundance. It doesn't hurt the plant in the slightest and is simply an added enjoyment.

Q How do you overwinter ferns in hopes they will come back next year?

A Some ferns are perennial and hardy plants in the ground, while Boston ferns and a few others are considered tender and would need to be protected to overwinter. Protection can be handled in a number of ways. You can take them inside to a cool, sunny location — but beware, they will shed leaves all winter. You can also store them in the crawlspace of your house (if you have one) or in your garage. The key to the latter two choices is to protect them from freezing. They will not be lush, attractive plants next spring, but with a little haircut and water, they should rebound once the weather warms back up.

Q The pride of my front yard, a large cleyera seemed to have died over the summer. I used a general-purpose fertilizer until late spring and watered twice a week during summer. Any idea what may have happened to it?

A While I can't be 100% positive, chances are good that your cleyera died from winter damage. We had many plants that lost leaves in the winter cold but grew back seemingly undamaged, and then when the heat and dry conditions hit in July, they died. Yours looks very similar to a large loropetalum of mine that did something similar. It isn't dead to the ground, but it is three-quarters dead. I am cutting mine all the way to the ground and letting it regrow. If you don't have the time for that, replace it.

Q I have a grouping of surprise lilies. This is their second year. Last year I had a lot of blooms. This past spring, I had lots of green leaves and was excited with the thought of lots of blooms to come. However, I hardly had any blooms considering the number of bulbs I know are planted. Should I dig them this fall and thin them out? Any thoughts as do what might have happened?

A Are they in a location that gets some sunlight while the foliage is up? Surprise lilies, or lycoris, have separate foliage and bloom times. While the leaves are up is when they manufacture food for blooms. If they are in too much shade, they won't bloom as well. If the foliage is prematurely cut or damaged, that can limit bloom as well. I cannot imagine that they would be too crowded after just two years. I would ignore them for another season and see what happens next year. Hopefully, it will be a pleasant surprise then.

Q I've included a picture of what I think is a fungus that has killed three trees in my backyard. Can you tell if it is fungus? Can you recommend a fungicide spray?

A I don't see anything on the trunk to indicate a fungus. I do see lichen, the shaggy grayish growths. They won't hurt a tree. I would investigate more thoroughly. Do you spray with herbicides? Has the soil level changed in recent years? If you have a tree that is dying, you can take pictures — plus some samples of soil with roots, branches and leaves — to your county extension office for a diagnosis.

Q I believe the picture of the seed pod and plant labeled Datura in a recent column were misstated. This is a moonflower pod.

A Datura is the genus; moonflower is a common name. There are several Datura that are winter hardy in Arkansas. Some have purple flowers, some purple and white, and some just white. The moonflower Datura opens with pure white flowers at night, and so gets the common name moonflower. Same plant, just different names.