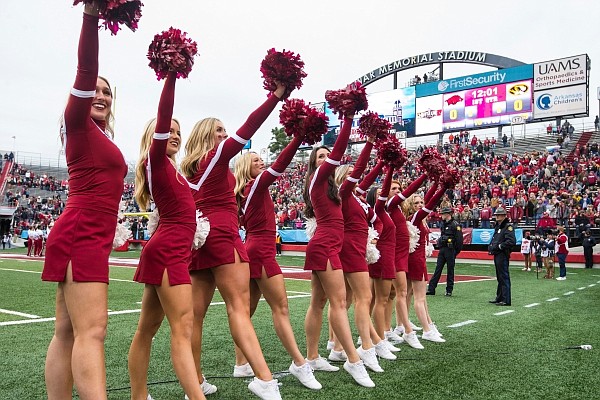 Arkansas cheerleaders are shown prior to the Razorbacks' game against Missouri on Nov. 29, 2019 at War Memorial Stadium in Little Rock.

The Razorbacks lead the total yardage figure 494 to 158. Arkansas has rushed for 281 yards. If it reaches 300 in the game, it would be the third time this season that happened and second in three weeks.

Dominique Johnson leads the team with 91 yards on 6 carries.

:20, 3Q: UAPB went for a fourth-down try in Arkansas territory and linebacker Andrew Parker blew it up and tallied a sack on the play. He was ecstatic as he ran off the field.

5:06, 3Q: Malik Hornsby was sacked and stripped by UAPB for a loss of 17 yards near midfield, then he came back and hit Jaquayln Crawford for 19 yards on third-and-22.

On fourth down, he missed Raheim Sanders screaming down the right sideline for what would've been a score. Hornsby threw just a touch in front of Sanders and Arkansas turned the ball over on downs.

The Razorbacks have fumbled 3 times today, losing 2. And they have 7 penalties for 56 yards. Some things to clean up, for sure, despite the score, which remains 45-0.

8:57, 3Q: Trelon Smith got hit with an unsportsmanlike conduct penalty for slapping the helmet of a UAPB player after a 7-yard run, then TJ Hammonds lost a fumble on Arkansas' next snap.

But the Golden Lions quickly gave the ball back. A badly thrown ball was picked off by Malik Chavis. He returned the pick all the way inside the UAPB 10, but his knee was down at the Arkansas 13. Huge swing in field position.

9:56, 3Q: Arkansas' backups are in the game on defense with the exception of Greg Brooks. The group forced a 3-and-out on UAPB's first series, but the Razorbacks had to call a timeout prior to the punt because it had 12 men on the field.

The second half will consist of two 12-minute quarters.

KJ Jefferson completed 10 of 17 passes for 194 yards and 4 touchdowns, and Treylon Burks had 145 yards of total offense and 3 scores on 6 touches.

Bumper Pool led the Arkansas defense with 8 tackles, and Myles Slusher grabbed his first interception in the end zone to preserve the shutout.

The Razorbacks finished with 426 yards of offense, averaged 10.4 yards per play and 19.4 yards per completion.

De'Vion Warren had a solid half at receiver. He caught 3 balls for 51 yards.

Ketron Jackson, the true freshman, added his first touchdown catch, and Dominique Johnson ran 4 times for 80 yards. Warren Thompson had a less-than-stellar half with 3 drops.

Nathan Parodi, though, had the play of the first 30 minutes, returning a Golden Lions punt 80 yards for a touchdown. He has 4 returns today totaling 147 yards.

Jefferson threw 4 TD passes in the half and Burks has 2 of them. The Warren native has 3 total scores prior to halftime.

2:59, 2Q: KJ Jefferson, on what may have been his final throw of the day, finds Ketron Jackson for a 29-yard touchdown. Arkansas pushes its lead to 38-0.

It is the first career score for Jackson, a really talented freshman from Texas.

Jefferson is 9 of 15 for 155 yards and 3 touchdowns against the Golden Lions.

According to our Matt Jones, Nathan Parodi's punt return was the Razorbacks' longest since Joe Adams' 97-yarder vs. Ole Miss in 2010.

KJ Jefferson will remain Arkansas' quarterback on what may be its final series of the first half. It is 31-0.

6:50, 2Q: Nathan Parodi just returned a punt 80 yards for a score. It is Arkansas' first such score since Joe Adams in Jan. 2012 against Kansas State.

Dominique Johnson spearheaded the 95-yard scoring drive with 3 carries for 67 yards. Jefferson is 7 of 13 passing for 100 yards and 2 scores to Blake Kern and Burks.

10:25, 2Q: Skyler Perry throws a pick in the end zone to end the UAPB scoring threat. Myles Slusher came away with his first career INT.

On the ensuing play for Arkansas, Dominique Johnson ran 34 yards up the gut to the Razorbacks' 39. He is a big play – running or blocking – waiting to happen. Johnson is the third back Arkansas has used today, following Trelon Smith and Raheim Sanders.

10:45, 2Q: The Golden Lions forced and recovered a KJ Jefferson fumble in Arkansas territory and are now on the move, inside the Razorbacks' 5.

On the first play after the takeaway, Skyler Perry hit a 13-yard pass, then Joe Foucha was flagged for offsides. Arkansas has already been penalized 5 times for 34 yards.

13:59, 2Q: UAPB came awfully close to converting a third-and-13 on Arkansas, but video review showed Skyler Perry was down a little more than 1 yards shy of the line to gain. The Golden Lions punted, putting the Razorbacks at their 9.

Perry has 66 yards of offense today – 50 passing and a pair of 10-plus yard runs. He's been solid on the QB draw so far.

UAPB has a pair of big plays offensively in this game. Quarterback Skyler Perry had a 42-yard completion early and running back Kierre Crossley added a 28-yard run before the end of the quarter.

1:12, 1Q: KJ Jefferson threw to the end zone on back-to-back throws for TJ Hammonds and Tyson Morris, and one is broken up and the other inaccurate. The Razorbacks take a 31-yard field goal by Cam Little and lead 17-0.

Jefferson is now 5 of 9 passing for 75 yards and 1 touchdown. Raheim Sanders carried 5 times for 29 yards on the drive, and De'Vion Warren totaled 30 yards on 3 touches, including 2 catches.

6:16, 1Q: Arkansas running back Trelon Smith gets dropped behind the line of scrimmage on third-and-4, bringing out the punt team for the Razorbacks. UAPB will take over from its 20 when play resumes.

8:25, 1Q: UAPB beat Arkansas defensive back Myles Slusher on a deep ball for 42 yards, and the Razorbacks had a pair of defensive penalties on the Golden Lions' second drive. UAPB, though, missed a 37-yard kick. Razorbacks' lead remains 14-0.

12:16, 1Q: Treylon Burks added a 49-yard touchdown run on the first play of Arkansas' second series. The Razorbacks lead 14-0 less than 3 minutes in.

12:25, 1Q: UAPB is forced to punt on its initial drive of the game, netting 5 yards on its opening three plays. Jayden Johnson, Hayden Henry and Grant Morgan each had tackles.

13:38, 1Q: KJ Jefferson looked pretty good on Arkansas' first series today. He hit all but one pass intended for Warren Thompson in the end zone. The Razorbacks got on the board in less than a minute and a half with Jefferson hitting Blake Kern for an 18-yard score.

15:00, 1Q: UAPB won the coin and deferred to the second half. Arkansas' offense will get things going today. I'm interested to see how running back carries will be handed out today and if KJ Jefferson can bounce back from a less-than-sharp performance last season.

Also noteworthy is offensive lineman Jalen St. John is on the travel roster but it does not appear he will play today. He has observed warmups since players began trickling onto the field. Defensive lineman Markell Utsey is with the Razorbacks but will not play.