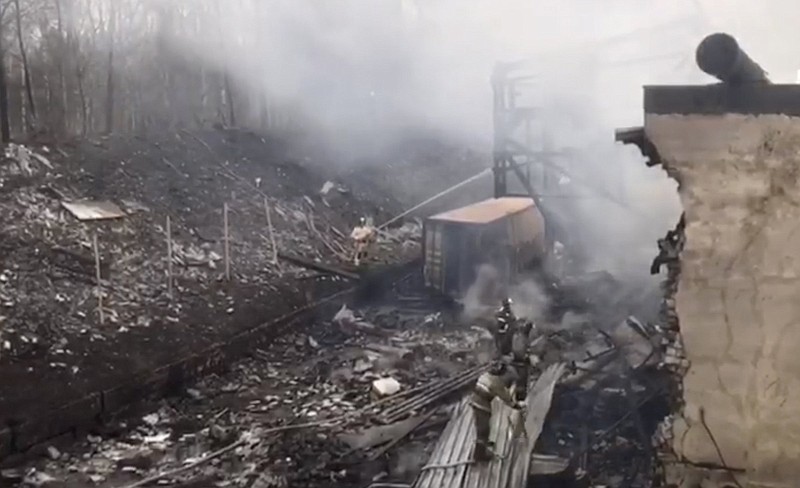 Emergency personnel work Friday at the site of an explosion and fire at a gunpowder factory in the Ryazan region of Russia. (AP/Ministry of Emergency Situations Press Service)

MOSCOW -- An explosion and fire at a gunpowder factory in Russia on Friday killed 16 people, officials said.

The Emergency Situations Ministry said the explosion hit the Elastik factory in the Ryazan region, about 167 miles southeast of Moscow.

Officials initially said that the blast killed seven people and left nine missing, but hours later announced that all those missing were dead. One person was hospitalized with serious injuries, according to local officials.

The ministry said 170 emergency workers and 50 vehicles were involved in dealing with the fire.

The Emergency Situations Ministry said the blast was caused by an unspecified failure during the production process.

RAMALLAH, West Bank -- A Palestinian militant group called off a hunger strike among dozens of prisoners held by Israel after nine days Friday, saying its demands had been met. An Israeli official denied the claim.

The Islamic Jihad group said Israeli authorities agreed to cancel financial penalties and the relocation of imprisoned militants to prison wings where members of other factions are being held. The group had said 250 prisoners took part in the strike.

An Israeli prison official denied any agreement had been reached and said the number of hunger strikers was greatly exaggerated, peaking at around 40 earlier this week. The prison official spoke on condition of anonymity in keeping with regulations.

Palestinians held in Israeli prisons organize themselves by political faction and have won concessions from Israel over recent years through hunger strikes.

There are currently six Palestinian hunger strikers demanding their release from so-called administrative detention, a policy whereby Israeli holds Palestinians for months or years without charge on undisclosed security grounds.

Islamic Jihad was one of the driving forces behind prison riots last month sparked by the escape of six inmates from a high-security facility. Five of the six were members of the group, which Israel and Western countries consider a terrorist organization. It objected to the relocation of large numbers of prisoners in the wake of the escape. All of the escapees were later recaptured.

President Vjosa Osmani said in a statement that she asked the Foreign Ministry "to declare two officials of the Liaison Office of the Russian Federation in Kosovo 'persona non grata.'"

She attributed the decision to their alleged "harmful activities that risk endangering national security and the constitutional order" of Kosovo. Osmani provided no further details.

She said the Foreign Ministry "has notified law enforcement institutions and relevant authorities" to implement the decision.

Osmani's statement added that Kosovo is "determined to fight against the malign influence of [Russia] and its proxies in the region, which aim to undermine our achievements, and those of the U.S., NATO and the [European Union]."

Osmani added that Pristina would "continue to closely co-operate with our American and European allies to prevent attempts for Kosovo and neighboring countries to fall prey to [Russian] ambitions to destabilize our region."

Kosovo was a Serbian province before it declared independence in 2008.

The violence broke out in Cox's Bazar district when one side opened fire, killing four people at the scene, said Shihab Kaiser Khan, commander of the Armed Police Battalion, which oversees the camp's security.

Two others died in a hospital while they were being treated for their injuries, Khan said.

It was not immediately clear why the violence broke out, but local media said the two sides were feuding to establish supremacy in the camp over an illegal drug business. Bangladeshi officials said earlier that some Rohingya groups are involved in serious crimes such as kidnapping and ransom-seeking, and that they use the camps to smuggle drugs from Burma, where they lived before arriving in Bangladesh.

Khan said one Rohingya man was detained with weapons but did not provide any further details. He said police were searching the camp for other suspects.

More than 700,000 Rohingya have fled to refugee camps in Bangladesh since August 2017, when the military in Buddhist-majority Burma began a harsh crackdown on the Muslim ethnic group after an attack by insurgents. They joined hundreds of thousands of others who have fled to Bangladesh over decades.

Overall, Bangladesh has been sheltering more than 1.1 million Rohingya refugees from Burma after previous waves of persecution. 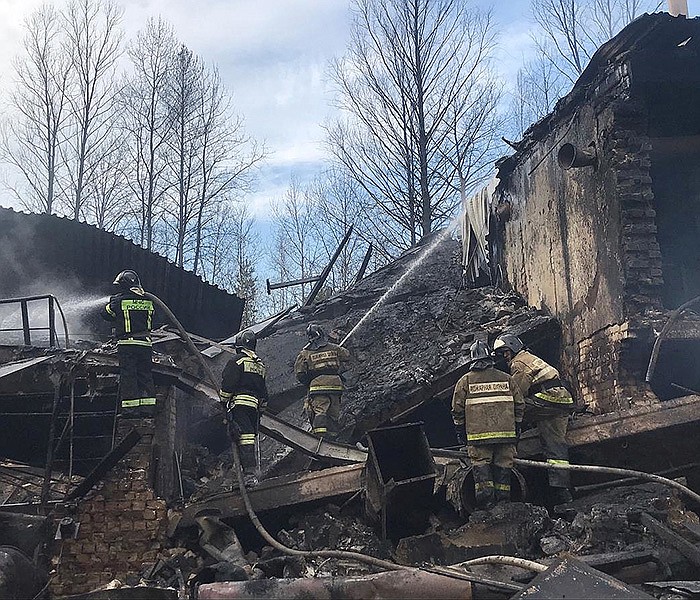 Emergency personnel work at the site of an explosion and fire at a gunpowder factory Friday in the Ryazan region, southeast of Moscow, Russia. Officials initially said the blast killed seven people and left nine missing, but hours later announced that all of those missing were dead. One person was hospitalized with serious injuries, according to local officials. (AP/Ministry of Emergency Situations press service)