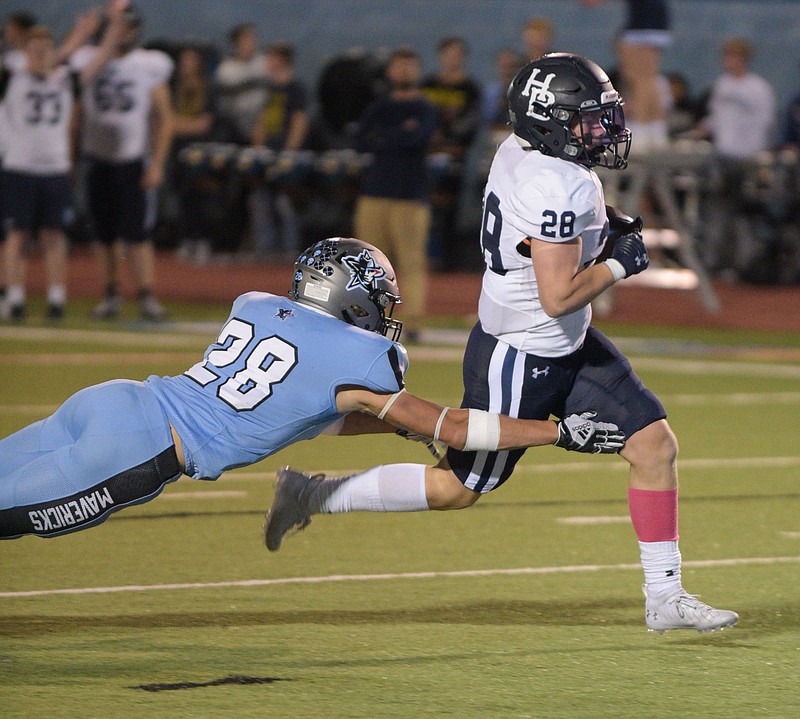 FORT SMITH -- In another wild 7A-West game in which Springdale Har-Ber and Fort Southside combined for 162 offensive plays and 1,122 yards, three fourth-quarter defensive stops were the difference.

Har-Ber turned away Southside three times with the Mavericks near the end zone -- all in the final quarter -- and finally put away a 49-28 win on Friday night at Jim Rowland Stadium.

Southside (1-7, 1-4) rallied with touchdowns on its first three possessions of the second half with quarterback David Sorg throwing a 6-yard touchdown pass to Luke Wyatt, a 31-yard scoring pass to Desmond Lopez-Fulbright and a 12-yard touchdown toss to Wyatt on consecutive series that had the Mavericks within, 34-28, with 4:14 left in the third quarter.

"It's like going to Disney World," Har-Ber Coach Chris Wood said. "You just never know which ride you're going to be on."

Southside forced a punt on Har-Ber's next series but had to punt itself, and Luke Buchanan threw a 9-yard touchdown pass to Peyton McKee to answer for the Wildcats and put Har-Ber up 42-28 on Buchanan's two-point run.

"We pulled within six," Southside Coach Kim Dameron said. "We just never could make the next play and get over the hump."

In the fourth quarter, the two teams combined for three turnovers and three fourth-down stops, but Har-Ber's defense forced the biggest ones.

After Andrew Reeder recovered a fumble for Southside, Har-Ber's Britt Wittschen recovered a Southside fumble at the 1 on a second-down run.

Four plays later, Har-Ber turned the ball over on downs at its own 10, but the Wildcats stopped Southside on a fourth-and-goal try again at the 1.

Har-Ber managed to get some breathing room and punted back to Southside, which drove to the Wildcats' 14 and faced another fourth down. Austin Motsinger halted that Southside threat with a sack with 3:55 left.

"Going into the fourth quarter, it was a tussle," Wood said. "The big goal-line stand and then we stopped them two more times on fourth down in that red zone area. Those were critical plays for us. We found a way to make plays in the fourth quarter and win the game."

Har-Ber then finally put the game away with an 84-yard drive capped by Cole Carlton's 9-yard scoring run up the middle with 59 seconds left to set the final score.

[Video not showing up above? Click here to watch » nwaonline.com/1023fssouth/]

"When we had the chance to regain the momentum, we would get the ball in situations and didn't play good situational offense and then sometimes defense based on what the down and distance was," Dameron said. "We've just got to get better in those situations where we make those plays. In the red zone, we have to get better."

Har-Ber shrugged off a lost fumble on a punt return the first time its touched the ball with Carlton, who was playing place of injured Hudson Brewer who didn't dress out, scoring on a 10-yard run with 7:44 left in the first quarter.

Buchanan threw a 7-yard scoring pass to McKee on Har-Ber's next series for a 13-0 lead.

Southside answered with Amari Tucker capping an 80-yard drive with a 13-yard run to cut Har-Ber's lead to 13-7 on the first play of the second quarter.

Buchanan threw a 50-yard pass to Fender down the right sideline four plays later, and Carlton capped an 11-play, 80-yard drive with a 2-yard scoring run for a 26-7 halftime cushion.

"The first half, we really controlled it and did some nice things defensively," Wood said. "We had three turnovers going into the half. Then in the third quarter, Southside made some nice adjustments offensively and kind of got us on our heals a little bit. They won the third quarter."

Sorg finished 33-of-53 passing for 425 yards. Three Southside receivers went over the 100-yard mark with Wyatt catching 10 passes for 120 yards, Lopez-Fulbright with seven receptions for 101 yards and Kent Carlisle with 5 catches for 103 yards.