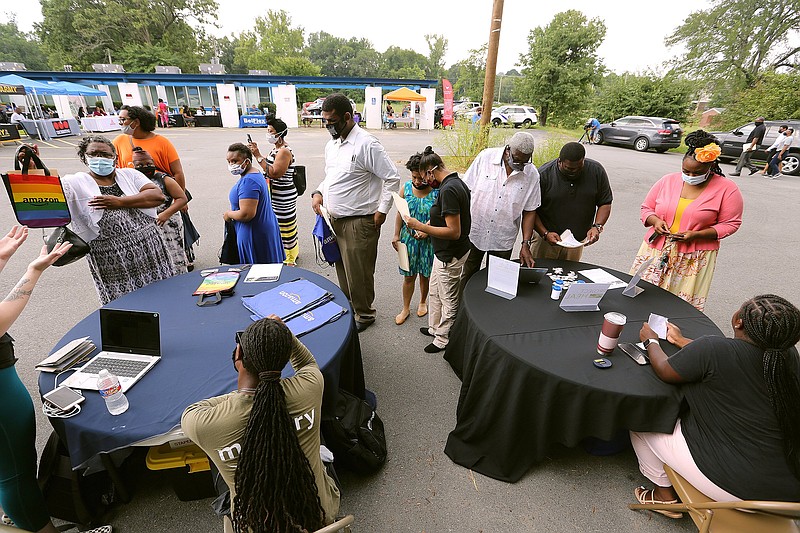 Arkansas appears to be returning to full-employment status with Friday's report that the statewide unemployment rate dipped to 4%, the lowest since the pandemic began ripping apart the global economy in March 2020.

Statewide unemployment was last below 4% in January and February 2020 before rising to 5% a month later as jobs began falling off with the spread of the coronavirus. Unemployment rose to 10% in April before beginning a steady month-to-month decline.

In September, Arkansas' joblessness rate was nearly a full percentage point below the U.S., which recorded 4.8% unemployment. A year ago, unemployment in Arkansas was 5.9%. Since then, the state has added 34,000 new nonfarm payroll jobs, according to statistics released Friday by the Arkansas Division of Workforce Services.

"The economy continues to expand in Arkansas with the unemployment rate dropping to 4.0%," Gov. Asa Hutchinson said in a statement Friday. "We continue to be lower than the national unemployment rate, and it is even better news that more people are returning to the workforce.

"Job training is available for any who wish to improve their marketable skills, and I expect job creation to continue in the state because of our skilled workforce and the population growth that we are currently experiencing."

Arkansas hit the trifecta: boosting the labor force, increasing employment and decreasing the number of unemployed, according to state economist Michael Pakko.

"This report was a definite improvement over what we've been seeing over the past two or three months," said Pakko of the Arkansas Economic Development Institute. "Everything is moving in the right direction. It's a rare case where a decline from 4.2% to 4% was considered statistically significant. There was an actual measurable improvement in the unemployment rate in September."

Economists generally consider 4% the threshold to qualify for full-employment status, according to Pakko. "There's nothing magical about that number but it tends to be one of those significant thresholds that when you get to 4% you're considered to be at full employment," he said.

Full employment is used to describe an economy when gross domestic product is at peak potential and virtually all who are able and willing to work have jobs.

Though showing just a slight increase of 594, labor-force improvements were refreshing news for economic development in the state after several months of declines and employers struggling to fill jobs.

"The number wasn't big but it looks like more people are getting back into our labor pool and, slowly but surely, it's rebounding," Commerce Secretary Mike Preston said Friday. "We're on the right path, and we just need to stick to it."

Manufacturing also is gaining steam, powered by the addition of 1,000 jobs in September. Year-over-year, measured from September 2020 to last month, the sector has gained 7,400 jobs, second only to business and professional services, which added 10,000 workers to payrolls.

"Most manufacturers still have a labor shortage but they are running at full capacity to catch up on a backlog of orders," Preston said. "For the next few months, we should see those numbers in manufacturing continue to go up."

Evidence of the sector's momentum was highlighted earlier this week in the Federal Reserve Bank's Beige Book report on economic activity regionally and nationally.

Arkansas manufacturers are reporting "upticks in new orders and production, although the rate of growth has slowed slightly," the Fed said in the publication, which assessed economic activity in August and September.

From August to September, the leisure and hospitality industry in Arkansas reported the largest decline, down by 2,100 jobs. Year-over-year job losses were registered only in the government sector, which lost 4,800 jobs.

Also Friday, the U.S. Bureau of Labor Statistics for the first time released individual state data for the agency's Job Losses and Labor Turnover Survey, called JOLTS, which indicates the number of job openings in a state. The federal agency released data for August, the most current month available.

Arkansas was the only state to record an increase in job openings during August, with the number of openings up by 8,000 and the job openings rate rising by 0.6 percentage points.