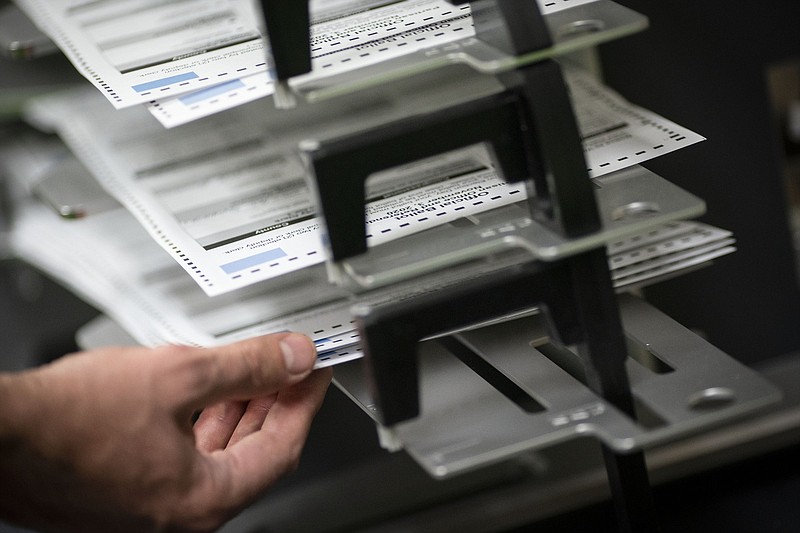 Poll workers sort ballots at the Kenosha, Wis., municipal building on Election Day in November 2020. Wisconsin Attorney General Josh Kaul this week asked a court to block subpoenas issued by an attorney hired by Republicans to lead another investigation into the election won by President Joe Biden. (AP/Wong Maye-E)

MADISON, Wis. -- A nonpartisan audit of the 2020 presidential election in Wisconsin released Friday did not identify any widespread fraud in the battleground state, which a key Republican legislative leader said shows its elections are "safe and secure."

The report from the Legislative Audit Bureau did make dozens of recommendations on how the state might improve its elections. It also determined that dozens of voting machines it reviewed worked correctly. Some conservatives have called for reviews of all voting machines.

"Despite concerns with statewide elections procedures, this audit showed us that the election was largely safe and secure," tweeted Republican state Sen. Robert Cowles, who co-chairs the Legislature's Audit Committee, which assigned the audit bureau to conduct the review. "It's my hope that we can now look at election law changes & agency accountability measures in a bipartisan manner based on these nonpartisan recommendations," Cowles said.

The audit didn't offer any evidence that the election won by President Joe Biden was stolen from former President Donald Trump, as Trump and some fellow conservatives have claimed. Biden's roughly 21,000-vote win over Trump in Wisconsin has withstood recounts and multiple court rulings.

Democrats hailed the audit as evidence that elections are safe, secure and accurate, but said they feared Republicans would cherry-pick the findings to sow distrust.

The Audit Bureau report did identify inconsistent administration of election law based on surveys of ballots it reviewed across the state. It made 30 recommendations for the Wisconsin Elections Commission to consider and 18 possible legal changes for the Legislature to weigh.

Republican state Sen. Kathy Bernier, a former county elections clerk and current chairman of the Senate elections committee, said the audit "did not reveal any sizable or organized attempt at voter fraud." But it did show "sloppy" and inconsistent election administration that must be addressed, she said.

Republican state Rep. Samantha Kerkman, the other Audit Committee co-chairman, said the report will serve as a blueprint for the Legislature to address areas identified where current election law is not being followed.

"It is critically important that we restore trust in our elections process," she said.

In an unusual move, state auditors did not give elections officials subject to the review a chance to respond and have their comments be part of the report. The Audit Bureau said it didn't solicit comment because so many people were involved with the audit that it would have compromised the confidentiality of its work.

Meagan Wolfe, administrator of the Wisconsin Elections Commissions, which oversees elections in the state, called the move a "missed opportunity" and said the agency was still reviewing the 168-page report to determine its response.

The report is one of two investigations in Wisconsin.

Republican Assembly Speaker Robin Vos ordered a second investigation after Trump criticized him for doing too little to scrutinize the election. That probe is being overseen by conservative former Wisconsin Supreme Court Justice Michael Gableman, who said last year that he thinks the election was stolen.

Vos said the audit showed the need for further investigation.

On Thursday, Democratic Wisconsin Attorney General Josh Kaul asked a court to block a subpoena for Wolfe, the state's top elections official, issued by Gableman. A judge set a Monday hearing on the request.

Gableman did not immediately respond to a message seeking comment.

Wisconsin is one of several states pursuing investigations into the 2020 election.

The audit said the elections commission should issue a rule, which would need legislative approval, saying whether local elections clerks can fill in missing information on absentee ballots or allow drop boxes.

It also found that state law requires clerks to write their initials on absentee ballot certificates in certain situations, but fewer than 1% of the ballots reviewed were initialed.

The audit also found just 24 people who might have two active voter registrations, and of those, only four who might have voted twice. The names of the four people, which weren't included in the audit summary, were referred to the elections commission, which could forward them to local prosecutors.