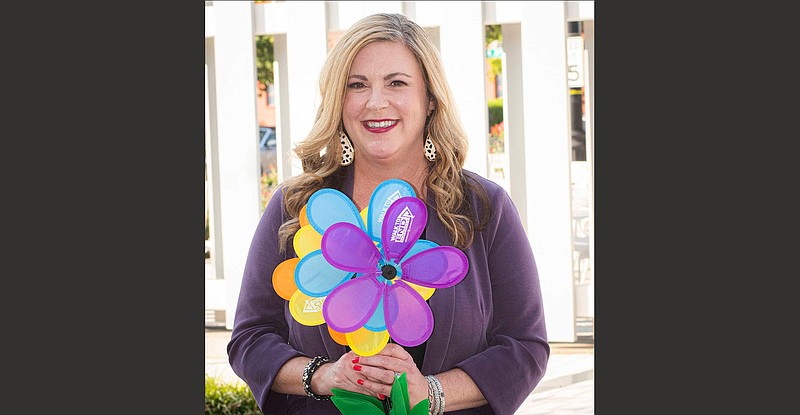 Allison Cox, chairwoman for the Central Arkansas Walk to End Alzheimer’s, holds flowers that will be given to participants representing those who lost loved ones, caregivers, people battling the disease and supporters. It starts Nov. 6 at 8 a.m. at Argenta Plaza in North Little Rock. (Arkansas Democrat-Gazette/Cary Jenkins)

On the morning of Nov. 6, however, this space, at 510 Main St., should be bustling with activity. That's when the 2021 Central Arkansas Walk to End Alzheimer's begins.

The two-mile Walk, presented by the Central Arkansas Alzheimer's Association, starts at the Plaza and is just one of some 600 in communities across the United States. It's the largest fundraiser for Alzheimer's care, support and research, according to the event's website. Other Arkansas Walks have already been held in Rogers, Jonesboro and Fort Smith; El Dorado hosts one at 8 a.m. Saturday at South Arkansas Community College-West Campus.

Allison Cox is chairwoman of the Central Arkansas Walk and is at Argenta Plaza this afternoon with her best friend and co-chairwoman, Heide Harrell.

Cox says her involvement with the Alzheimer's Association was inspired in part by the pandemic.

"Covid made me feel like I needed to do more," she says. "I started doing some research and I joined the board of the association."

There was also an Alzheimer's connection, she adds.

"I've had so many friends over the years with people in their families that had Alzheimer's," she says. "I also work in human resources [she's the chief people officer for Encore Bank], and I saw it impact a lot of employees."

Harrell says her maternal great-grandmother and maternal grandfather both passed away from the disease, and two others, a great-aunt and great-uncle, have Alzheimer's and are in assisted living facilities.

The association is hoping to raise $125,000 from this year's Walk to help fight the disease.

"A very large percentage will go back into the care and support and research for those in Arkansas," says Cox, who also volunteers with the Centers for Youth and Family and has volunteered for City Year.

During the Walk, participants will carry artificial flowers that symbolize their relationship with the disease -- purple for those who have lost a loved one to Alzheimer's, yellow for caregivers, blue for those with Alzheimer's and orange for supporters of the association.

Walkers will get to "plant" their flowers at a promise garden along the route, Cox says.

The route will have aid stations for walkers and at least one food truck will be at the start for participants to fuel up beforehand. Music will be provided by a local band as well as school bands, and supporters will be cheering for walkers on the route, Cox says.

"We really want people to come out and be a part of it, even if it's just to come and cheer," Cox says.

Earlier this month, there were 391 walkers registered, and Cox says she is hoping for 500 participants. Walkers can amble along the course with a team or individually.

Last year, because of the pandemic, the Walk was done remotely with walkers taking part from their homes. There is also that option this year, Cox says.

"If people aren't comfortable coming here, they can walk at home. There is an app that will let them be part of the celebration and do interactive things."

Harrell notes that Cox was instrumental in moving this year's trek.

Talking about her time organizing the Walk, Cox says: "It's been fun. We have such an amazing committee and there are quite a few people on the committee that have done this for several years and that have been really impacted by Alzheimer's. I think because there is so much emotion and passion, and because they have been involved with it for years, it's all come together very well."

For information on the Walk to End Alzheimer's, visit act.alz.org. 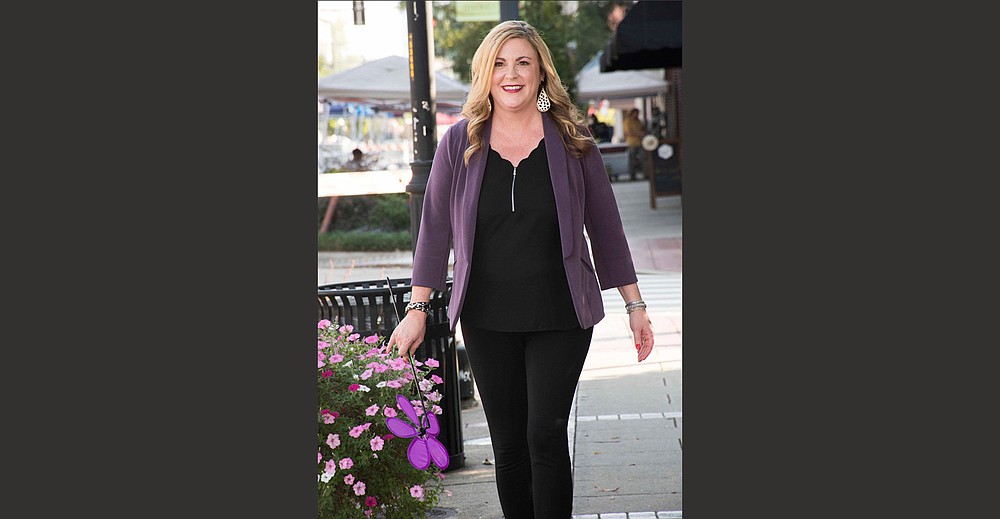 Allison Cox is chairwoman of the 2021 Central Arkansas Walk to End Alzheimer’s, which starts at 8 a.m. Nov. 6 at Argenta Plaza in North Little Rock. Her involvement with the Central Arkansas Alzheimer’s Association was inspired in part by the pandemic. (Arkansas Democrat-Gazette/Cary Jenkins)