The world in brief: 2 Afghan civilians die in roadside blast 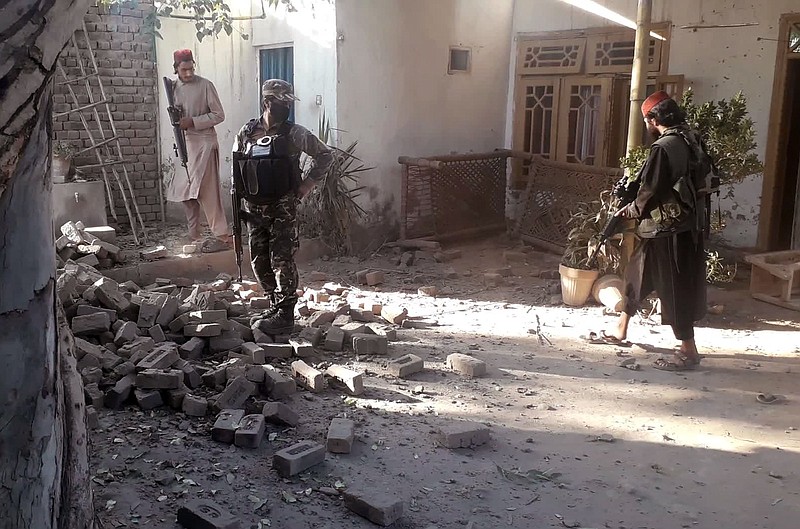 KABUL, Afghanistan -- A roadside bombing targeting a Taliban vehicle in eastern Afghanistan killed at least two civilians Saturday, including a child, Taliban and health officials said. Four others were wounded.

Two bombs detonated as a Taliban vehicle was passing by, killing one child, district police chief Ismatullah Mubariz said, adding that no Taliban fighters were harmed.

No one immediately claimed responsibility for the attack, but the Islamic State group, also known as ISIS, is active in eastern Nangarhar province, where it has launched frequent attacks targeting the Taliban.

A local hospital official said two bodies and four wounded civilians were transferred to the hospital after the attack. The official spoke on condition of anonymity because that person was not authorized to brief the media.

Recently, ISIS has shown signs of expansion in Afghanistan, with attacks in the north, the south and the capital of Kabul. The group's ability to launch frequent attacks has cast doubt over the Taliban's ability to maintain security and stability in the embattled country.

Last week, ISIS claimed responsibility for a deadly suicide bombing on a Shiite mosque in southern Afghanistan that killed 47 people and wounded scores more. It was the deadliest attack since the dramatic U.S. exit from the country, which allowed the Taliban to seize control of the Afghan capital.

The third jailbreak in Africa's most populous country this year raises more concerns about how safe detention facilities are in the West African nation where authorities have struggled to stem rising violence. A handful of security facilities, especially police stations, have been attacked in a similar manner in the past year.

Olanrewaju Anjorin, a spokesman of the Oyo correctional center in Oyo state, said that the gunmen attacked the facility late Friday and an investigation into the incident that will reveal the extent of damage has begun.

Francis Enobore of the Nigerian Prisons Service also confirmed the incident and said he was on his way to the attacked facility.

Friday's attack is the third this year in Nigeria, where jailbreaks are becoming more frequent and police only capture a fraction of those who escape. Lagos-based online newspaper TheCable reported in July that at least 4,307 inmates had escaped from prisons since 2017, based on compiled media reports.

On Sept. 13, 240 inmates were freed after gunmen attacked a detention facility in north-central Kogi state with explosives, and on April 5, at least 1,800 were freed in the southeast Imo state when another facility was also blown up.

Most of the recent jailbreaks in Nigeria seem not to be connected although the attacks are carried out in a similar manner with the use of explosives. Authorities have managed to rearrest some escaped inmates, sometimes in neighboring states, while others return willingly.

A good number of those who have escaped in such attacks are yet to be convicted and still awaiting trial. Nigerian prisons hold 70,000 inmates but only about 20,000, or 27%, have been convicted, according to government data.

WASHINGTON -- The U.S. military announced it killed a senior al-Qaida leader in an airstrike Friday in northwest Syria.

Army Maj. John Rigsbee, a spokesman for U.S. Central Command, said in a statement that Abdul Hamid al-Matar was killed by a drone strike.

Rigsbee said the killing of al-Matar will disrupt al-Qaida's "ability to further plot and carry out global attacks threatening U.S. citizens, our partners, and innocent civilians." He said al-Qaida "uses Syria as a base for threats reaching into Syria, Iraq and beyond."

The drone strike came two days after a U.S. military outpost in southern Syria was hit by a coordinated attack that included drones and rockets. U.S. officials said no American troops stationed there were injured or killed.

MEXICO CITY -- Rick strengthened to a hurricane Saturday off Mexico's southern Pacific coast and is forecast to hit that coast by Monday.

The U.S. National Hurricane Center said Rick may become a major hurricane with winds as high as 120 mph before hitting land somewhere between the seaport of Lazaro Cardenas and Manzanillo.

The hurricane was about 205 miles south of the coastal resort of Zihuatanejo.

The storm had winds of 80 mph and was moving north-northwest at 7 mph. The center warned Rick could produce flash flooding and mudslides.

It was expected to hit along a stretch of coast west of Zihuatanejo that holds no resorts but includes two major seaports and mountainous terrain that in the past has been very vulnerable to flash flooding and mudslides.