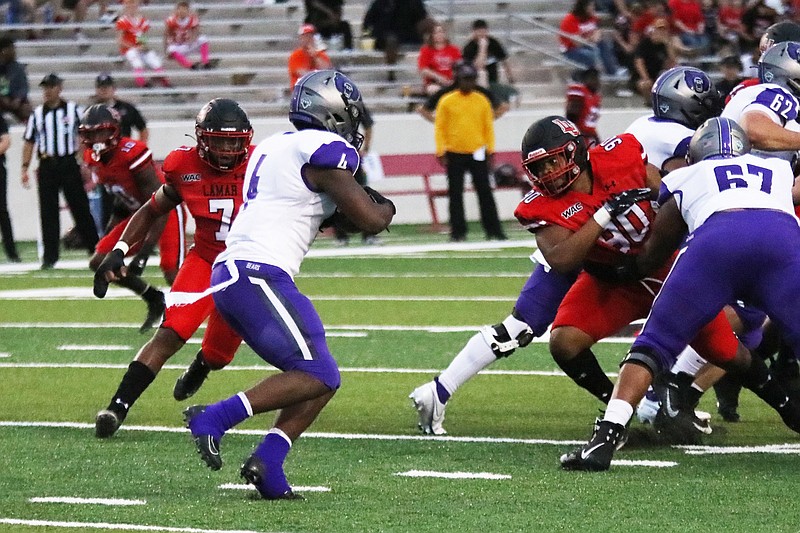 UCA running back Darius Hale looks for running room Saturday during the Bears’ 49-38 victory over Lamar in Beaumont, Texas. Hale finished with 254 yards and 4 touchdowns on 22 carries. (Photo courtesy University of Central Arkansas)

After what's been a shaky start to its season, the University of Central Arkansas had a game that went off with fewer hitches than usual Saturday, beating Lamar 49-38 in Beaumont, Texas, behind an impressive rushing performance.

"The difference in the game was our run game," UCA Coach Nathan Brown said in a postgame radio interview. "Darius [Hale] and Kylin James just ran about as good as you could want running backs to run. They found a hole, they were patient, they didn't take minus yardage plays, and they were productive."

UCA (3-4, 2-2 AQ7) finished with 541 yards of total offense, but the usually pass-happy Bears had 350 rushing yards -- with Hale and James combining for all of the team's positive yards on the ground -- marking a single-game season-high.

Hale ran wildest, finishing with 254 yards and 4 touchdowns on 22 carries. The Pearland, Texas, native came in tied for fifth in the FCS in rushing touchdowns with nine.

Hale now has 645 rushing yards and 13 touchdowns on 121 attempts. Prior to Saturday, his season-high came in last week's loss to Eastern Kentucky when he ran for 99 yards. Over his past two games, Hale has 353 yards and 7 touchdowns on 42 carries.

The last time a Bear rushed for more than 200 yards in a game was almost six years to the day when Blake Veasley ran for 292 yards at Lamar on Oct. 24, 2015. While Veasley had 38 more yards than Hale, he did so on 27 more carries.

James also recorded his first career passing touchdown at the end of the first quarter, as the Bears ran a double pass when he found Tyler Hudson for a 42-yard score.

While the Bears had a lot of positives on offense, they had one of their season's worst defensive performances.

The 38 points were also the third-fewest the Bears have allowed this season.

The defensive collapse stood out most in the second half, as Lamar outscored the Bears 16-15 in the third quarter and outgained them 285-186 after halftime.

The Bears only ran the ball once in their opening two second-half drives. Brown said the reasoning was actually spurred by UCA's comeback loss to Eastern Kentucky.

"We came out with an aggressive mentality," Brown said. "They did a good job just getting pressure on us early on in the second half. It got us off our mark in the backfield."

Despite going three and out on those drives, UCA ran the ball three times in four plays on its third third-quarter drive, with James scoring on a 17-yard run.