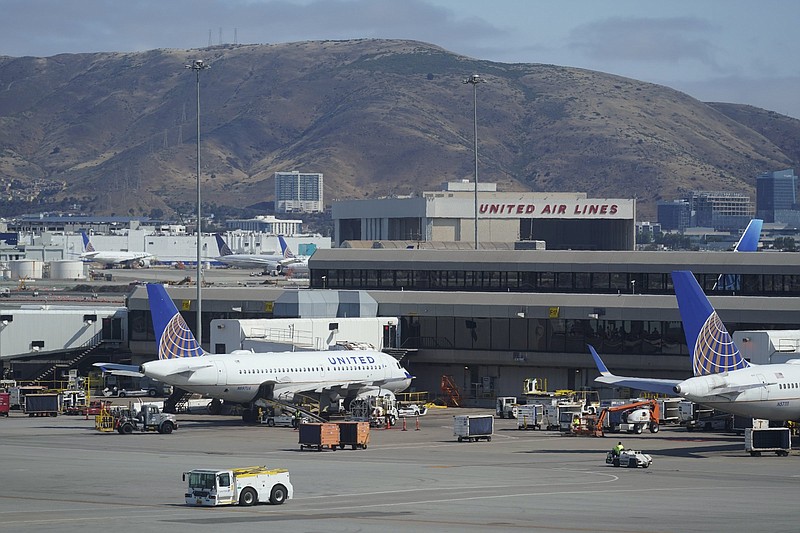 United Airlines planes are seen parked at San Francisco International Airport with a maintenance hangar in the background on in July, in San Francisco. (AP/Eric Risberg)

Amanda Millwood has never flown first class. But next month -- thanks to a flight credit from 2020 and a cheaper-than-expected price -- she will sit in the front of the plane for a weekend trip from Birmingham, Ala., to New York.

"It's kind of a 'treat yourself' kind of thing," said Millwood, an executive assistant. "I lucked out that my credit was big enough that I could fly first class."

The 37-year-old said she is usually envious of the extra room that first-class passengers have. But the seat she chose comes with another perk: No one sitting next to her.

Typically, high-end seats on airplanes are crowded with business travelers whose companies pony up for the extra comfort. But with the standard front-of-plane dwellers not fully back on board, executives with the country's largest airlines said in recent earnings calls that leisure travelers are often filling the gap in premium seats. Those include first class, business class, and the newer sections that offer more leg room and perks than economy at prices lower than business class.

"We believe that through the pandemic, we've created kind of a new class of customer, which is the high-end consumer that wants these products that maybe didn't have as much access to them because they were given to the business customer earlier in the booking process," Delta Air Lines President Glen Hauenstein said earlier this month.

"What we've seen over the last few months in particular is more of a willingness to spend a few extra dollars to upgrade to a premium seat in the main cabin or to fly in the first-class cabin," he said recently.

Several only-in-a-pandemic factors are contributing to the trend. American Airlines, for example, removed many of its larger jets from international travel and deployed them domestically. That meant cushier seats were available on routes that might not have offered them before.

"We were really encouraged by what we saw, where there are a lot of customers with a lot more disposable income who would travel on leisure trips," American Airlines' chief revenue officer Vasu Raja said. "They would not only pay for the lie-flat product, they would pay a premium versus other non-lie-flat products in the marketplace."

Business travel started to creep back in the summer, but the surge of coronavirus cases caused by the delta variant put the brakes on that return for a while -- leaving the seats favored by corporate types up for grabs.

Leisure travel in the United States, on the other hand, has roared back to life. And at least some of the people who are getting away are sitting on untouched travel budgets, flight credits or miles.

The flight deals alert service Scott's Cheap Flights has seen more demand for the higher-end seats, with some customers upgrading to premium economy and taking advantage of business-class deals.

Willis Orlando, member operations specialist at Scott's Cheap Flights, said the attitude is often "I've been waiting to travel a year and a half; I'm splurging."

Denise Milano Sprung, of Long Island, booked first-class tickets from New York to Orlando for herself, her husband and their two teenage sons over the summer for a Disney trip and found the prices not too much higher than economy.

"I wanted my sons to be a little bit separated from other people," said Sprung, marketing director for the wealth-management firm her husband, Larry Sprung, founded. "I did buy that one for the space."

To celebrate her husband's birthday earlier this month, she opted for first-class tickets to Las Vegas, where they were going for a work-fun hybrid: a conference and a hockey game. They typically fly Delta's "Comfort Plus" class, which has more legroom, priority boarding and dedicated overhead bin space.

Because of a cancellation on the Las Vegas trip, the couple was upgraded above first class to "Delta One," with seats that allow passengers to lie down.

"It did make a five-hour flight -- where you get up at 5 in the morning -- much nicer," Sprung said.

Chris Lopinto, founder of the research tool and subscription service ExpertFlyer, said travelers even in these odd times shouldn't go into a flight expecting an upgrade, though they may be able to place bids to pay for upgrades.

He said if passengers want to use miles to pay for higher-end seats, they should do the math to make sure the cost in miles makes sense: "You never want to get less than a penny per mile for sure," he said.

Orlando said travelers should try to apply flight credits -- which will eventually expire -- to the price of a higher ticket if they want to go big. He also suggested using a subscription service like his that sends alerts when fares drop, or searching frequently on tools such as Google Flights for good deals. He said there have been steep price drops for business-class seats.

"I'm a decidedly back-of-the-cabin guy," he said, "but I've been very tempted quite frequently."