Mexico has own border problem 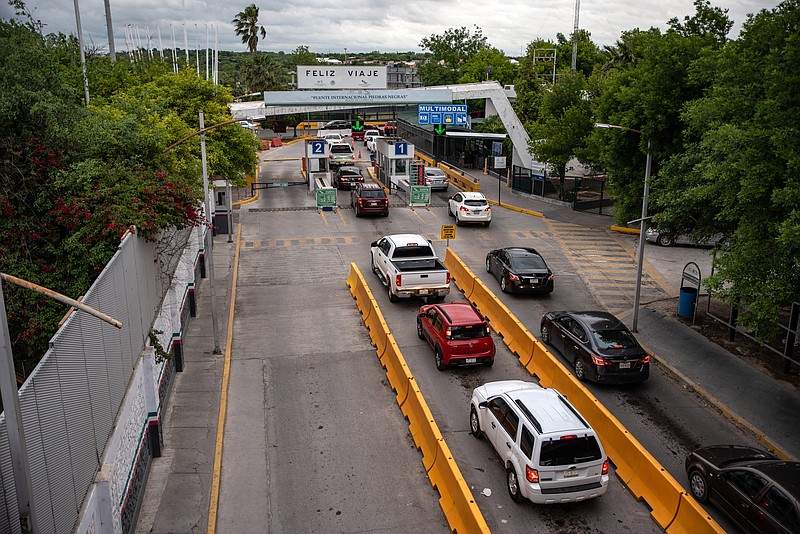 Cars wait in Eagle Pass, Tex., to cross the border into Piedras Negras, Mexico, in April 2019. MUST CREDIT: Photo for The Washington Post by Sergio Flores

MEXICO CITY - Some call it a crisis at the border. Not the undocumented migrants flowing north. The illegal Fords and Chevrolets moving south.

Since the 1990s, Mexico has been flooded with as many as 18 million vehicles illegally imported from the United States, known colloquially as "autos chocolates" -- chocolate cars -- more than a third of all the automobiles in the country.

To Mexican car dealers, they pose an existential threat: vehicles driven across the border, untaxed and without import permits, sold for less than market value. To Mexican law enforcement, the concern has been even more severe: an endless fleet of unregistered vehicles that could be co-opted by organized crime.

But on both sides of the border, the chocolate cars -- the term might be a play on "chueco," or crooked -- have been big business, one of the region's most lucrative illicit markets. Used-car tycoons emerged in Texas and California border towns. Massive car lots sprouted along the Rio Grande. In places such as Tijuana, a cottage industry emerged around the sale of counterfeit license plates.

The car you sold years ago in an American city -- or the one stolen from you? There's a good chance it's now in Mexico.

Last week, President Andres Manuel Lopez Obrador dipped his toe into the controversy, offering amnesty to the owners of millions of illicit American cars. The decree he published recently had the lofty ring of a peace accord: "The agreement for the regularization of used vehicles of foreign origin." It promised "to fight crime and protect citizens against the use of unregistered vehicles."

As of last week, owners of autos chocolates in seven northern states could pay $120 to make legal the car they imported or purchased illegally. The revenue, Lopez Obrador said, would be put toward road improvements.

The response was immediate.

"An attempted murder on the economy," charged the newspaper El Economista.

"A prize for the mafia," the Mexican Association of Automobile Distributors said.

"This country will become an automotive garbage dump," the Mexican Employers Association warned.

But across much of northern Mexico, the owners of used American cars and trucks quietly rejoiced. They could finally replace expired U.S. license plates with Mexican ones and become law-abiding drivers once again.

The decision to legalize the autos chocolates echoes more prominent debates about other illicit flows across the border. In the United States, some make parallel arguments for the mass legalization of migration or drugs. In Mexico, the amnesty of imported cars sometimes feels no less controversial.

"We need to recognize that we don't have control over the passage of these cars along the border," said Fidel Villanueva, director of Anapromex, which defends the owners of illegally imported cars when the government tries to seize them. "The Americans don't want them, so they'll keep coming, buenos, bonitos y baratos" -- good, nice and cheap.

"We needed this amnesty," he said.

Given Mexican taxes and permit fees and the vast pool of used cars in the United States, a used car purchased legally in Mexico can cost more than twice as much as the same model imported illegally (and tax-free) from the United States. For decades, that has made autos chocolates a gift to Mexico's middle class, which would otherwise have been locked out of the car market.

Lopez Obrador, a populist leader who has described his governing philosophy as "first, the poor," appeared to see a political victory in the auto amnesty. He described the owners of illegal cars as the victims of an unjust, neoliberal economy.

"They use these because they can't afford to buy a car from an agency," he said. "With these cars, they take their kids to school."

Juan Perez Reyes, a ranch worker from the state of Baja California, was eager to regularize his 2004 Honda Accord. He bought it as an auto chocolate several years ago, to save money.

"We'll be able to drive with a feeling of reassurance, without the constant fear that we might run into a checkpoint or a police officer," he said.

But the country's automobile industry was outraged by Lopez Obrador's decision. For years, executives have complained about the ease with which American cars -- most purchased at U.S. auctions, salvage yards and dealerships -- have been taken across the border and resold.

Those who drive autos chocolates in Mexico are careful to avoid checkpoints where their registration paperwork might be inspected. The locations of those moving checkpoints are posted on Facebook by drivers of chocolate cars looking out for each other. When stopped by police, they often pay a small bribe.

Now, auto executives say, that illegal behavior is being rewarded.

"We know the best way to attract national and international investment is by respecting the rule of law. Laws should be abided and those who don't abide by the law should pay for it," said Jose Zozaya, president of the Mexican Automobile Industry Association. "In this case, we think legalizing the illicit contraband of automobiles is not the formula."

The Mexican auto industry, which contributes more than 3% of the country's GDP, maintains major influence. Ironically for an industry now advocating an element of protectionism, 80% of the vehicles it produces are exported to the United States.

Zozaya said the amnesty would reduce the value of similar cars manufactured or imported legally in Mexico.

"Hard-working people will lose the value of their investments because these vehicles will saturate the market and their value will decrease," he said.

For years, Mexican efforts to block the autos chocolates have appeared halfhearted. In the 1990s, for example, drivers entering the country in U.S. vehicles were asked to leave deposits of up to $800 at the border, to be returned when they exited.

Previous amnesty offers included complex and often expensive schemes for taxing vehicles depending on their age and the country where they were manufactured. So the vehicles kept coming illegally. Sometimes they arrived in sudden bursts, as when Hurricane Katrina filled U.S. salvage yards with damaged cars. Many of those fell into the hands of Mexican criminal groups.

Last year, officials in Baja California estimated that roughly 80% of vehicles used in crimes were unregistered, most of them imported illegally from the United States. Lopez Obrador has suggested that the amnesty will make more cars traceable by Mexican law enforcement.

But critics argue that the reform rewards criminal groups that derive revenue from importing and selling cars illegally -- who will probably now see a spike in sales. Though the amnesty program applies only to vehicles that were in the country before Lopez Obrador signed the decree, analysts say the cutoff is unlikely to be enforced.

Already, some say, the number of illegally imported cars is rising.

"We're going to see a surge in traffic," said Rafael Velazquez Flores, a professor of international relations at the Autonomous University of Baja California. "More old cars on the road and more pollution."