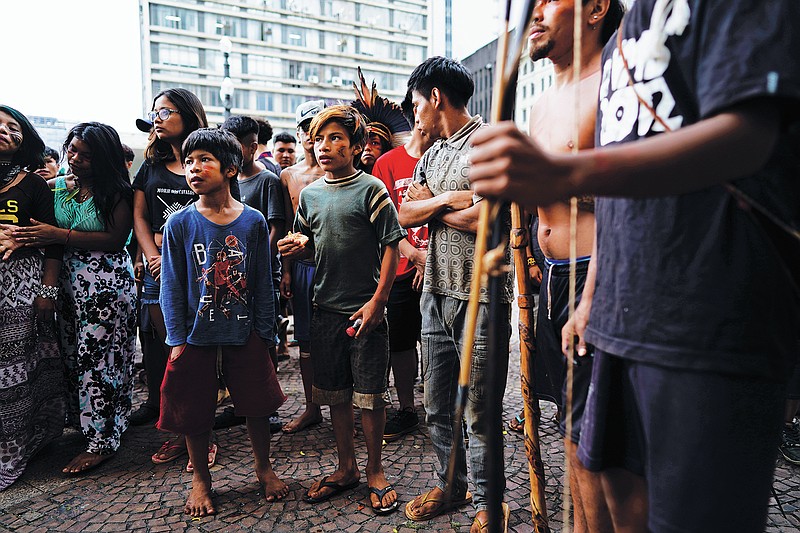 A roundup of some of the most popular but completely untrue stories and visuals of the week. None of these are legit, even though they were shared widely on social media. The Associated Press checked them out. Here are the facts:

CLAIM: Workers with the Federal Emergency Management Agency are not required to be vaccinated against covid-19 but are being used to replace health care personnel who are refusing to comply with vaccination mandates.

THE FACTS: The claims are spreading across social media platforms, gaining thousands of likes and shares, but both assertions are false. FEMA workers are considered federal employees and are required to be vaccinated against covid-19 by Nov. 8 under an executive order issued by President Joe Biden. Also, the agency is not sending its workers to replace unvaccinated health care personnel.

"FEMA employees are required to be vaccinated as determined by the president," FEMA's director of public affairs, Jaclyn Rothenberg, told the AP, adding: "The social media posts that claim FEMA workers are replacing unvaccinated health care workers are unequivocally false."

FEMA coordinates within the federal government to prepare for and respond to disasters. While the agency has supported states and health care systems throughout the pandemic, it has mainly done so by providing resources and coordination assistance, such as setting up mobile vaccination units and reimbursing states for some inoculation efforts, Rothenberg said. In other cases, the agency has coordinated with the U.S. Department of Health and Human Services' Office of the Assistant Secretary for Preparedness and Response to distribute supplies such as ventilators and antibody treatments, and has worked with other federal agencies that deploy medical staff requested by states, according to Rothenberg.

"In partnership with Health and Human Services, Veterans Affairs, and Department of Defense, we have deployed medical staff at the request of the state to alleviate some of the stress caused by COVID on the state's health care system," Rothenberg wrote in an email. "These deployed medical staff abide by the vaccination and other preventive measures requirements established by the receiving facility."

Some states have raised the possibility of addressing potential staffing shortages by calling in medically trained National Guard members. The Guard is also mandated to receive the vaccine under a Pentagon order.

CLAIM: Vaccine-related strokes in pilots have caused an "epidemic of plane crashes."

"There's a silent epidemic of plane crashes happening around the country and nobody's connecting the dots," the video's narrator says. "By listening to the audio from the cockpit of this latest crash, it's clear that the pilot was having a stroke. The pilot was a doctor from a hospital. He was required to get the vaccine."

It's true the pilot in the Oct. 11 crash was a cardiologist, but the claim that he suffered a medical condition after receiving the covid-19 vaccine is not supported by any evidence to date. The National Transportation Safety Board, which said it is investigating the crash, has not yet stated a cause.

The idea that there's an "epidemic" of vaccine-related plane crashes is also unsupported. FAA spokesperson Brittany Trotter told The Associated Press in an email that the agency "has seen no evidence of aircraft accidents or pilot incapacitations caused by pilots suffering medical complications associated with COVID-19 vaccines."

FAA data shows that fatality rates from general aviation accidents have decreased in 2021. Pilots who want to fly a plane or serve as a required airline crew member after receiving a dose of a covid-19 vaccine must wait 48 hours before doing so, according to FAA guidelines. That's intended to allow pilots to wait out any side effects from the vaccine, which the Centers for Disease Control and Prevention says are typically mild to moderate and resolve within a few days.

There is no evidence that covid-19 vaccines increase the risk of stroke, but the coronavirus itself is associated with an increased risk of stroke, according to Dr. Mitchell S.V. Elkind, a professor of neurology and epidemiology at Columbia University and the immediate past president of the American Heart Association.

"About 1-2% of people hospitalized with COVID develop strokes," Elkind told the AP in an email. "So getting vaccinated is the best way to prevent adverse outcomes of COVID, including stroke."

CLAIM: An official government poster from Ireland's Health Products Regulatory Authority says sudden death is a side effect of the covid-19 vaccines.

THE FACTS: The poster was fabricated. Ireland's agency in charge of regulating medicines and devices has not listed "sudden death" as a covid-19 side effect.

Siobhan Molloy, a spokesperson for Ireland's Health Products Regulatory Authority, said in an email that the poster was not produced by the country's regulatory authority.

"I can categorically state this is not an HPRA produced poster -- or indeed a piece of communication produced by the Health Service Executive (HSE) who on behalf of the Irish Department of Health produce advice information," she said.

The Health Products Regulatory Authority is responsible for regulating medicines and devices that are used on people and animals. While the poster was designed to look official, Molloy said the "'people of Ireland" logo does not exist and is not representative of the authority either.

Death is not listed as a side effect from the vaccine by the Ireland Health Service Executive agency. In its official informational pamphlets for the vaccine, the agency says the covid-19 vaccine can "protect people and reduce the illness and deaths caused by the virus."

The Centers for Disease Control and Prevention and numerous health officials have found covid-19 vaccines, which have undergone clinical trials and been administered to millions in the U.S., to be safe and effective.

CLAIM: A video shows aboriginal people in Australia defending themselves with bows and arrows against authorities trying to forcibly administer covid-19 vaccines.

THE FACTS: The video was filmed in Brazil nearly a year before the onset of the coronavirus pandemic. It shows a March 2019 demonstration in Sao Paulo by a group of Guarani Indigenous people who were protesting changes to health care infrastructure and resources. But social media users are falsely claiming it shows Indigenous people in Australia staving off coronavirus vaccination efforts.

"The Australian Aborigines are defending themselves with bow and arrow against the authorities who are forcibly trying to vaccinate them," reads one false tweet that shared the video.

The original video was posted to Twitter on March 28, 2019, by a journalist working for the Latin American news outlet TeleSur. The journalist shared the video alongside a tweet stating that it captured tension in front of the Sao Paulo mayor's office after the mayor refused to meet with a group of Guarani people. The protesters were demanding to speak with the mayor about recent changes to health care services provided to Indigenous communities, according to a local news report from G1, a website operated by the Brazilian outlet Globo.

Photos showing the same scene can be found on the stock photo site Alamy and in the Globo report describing the event. Google maps data confirms the location was Sao Paulo's city hall.

THE FACTS: Social media users and conservative outlets shared an image of a letter they falsely claimed was an official memo from a Canadian government agency directing employees not to use a slogan popular among critics of President Joe Biden. The falsified memo from Shared Services Canada, which used the image of the Canadian flag in its letterhead, said federal employees were banned from using the phrase "Let's Go Brandon" in any variation, under any circumstance, and violators of the policy could be fired. Online posts echoed the false language.

The phrase refers to a meme that emerged earlier this month from a video of an interview with NASCAR driver Brandon Brown after he won an Xfinity Series race at Alabama's Talladega Superspeedway. A reporter said on air that fans behind him were chanting "Let's go Brandon," when video footage indicates the actual chant was "F--- Joe Biden." Some people have suggested the reporter purposefully misinterpreted the crowd's chant and the quote has become a catchphrase among critics of Biden.

Shared Services Canada, which is responsible for providing information technology services across federal agencies, told the AP that the letter circulating on social media is not a real memo from the department.

"We can confirm this message was not issued by Shared Services Canada and it does not reflect departmental policy," an agency spokesperson wrote in an email.

A second false claim -- that Facebook had amended its hate speech policy to ban accounts from using "Let's go Brandon" -- also circulated online this week. The claim originated in a tweet by conservative commentator Jeff Charles, who told the AP his post was satirical. His Twitter bio also states: "I spit hot satire." However, many social media users spread the incorrect claim seemingly believing it was true. A Facebook spokesperson told the AP in an email that Facebook has not changed its hate speech policy as falsely claimed.

THE FACTS: A photo circulating widely on Instagram on Tuesday shows near-empty grocery store shelves in Houston, which the caption falsely suggested was a result of Biden's "Build Back Better," an agenda that focuses on social policy and programs.

"Supply chain issues. Terrible job numbers. People quitting their job because the government is essentially forcing them to put a needle in their arm or lose their job. Crumbling economy, terrible inflation, and the list goes on. This is Joe Biden's 'Build Back Better!'" the Instagram caption stated. But the post, which received more than 135,000 likes on Instagram, left out that the photo was taken during a severe winter storm.

The photo was taken on Feb. 20, 2021, in Houston by photographer Francois Picard for Agence France-Presse. The extreme low temperatures left millions in Texas without power and water, which also devastated the entire transportation infrastructure, leading to food supply issues. Some grocery stores had to close locations entirely.

The legislation at the center of Biden's "Build Back Better" plan was introduced to the House in September, and Democrats are still working to rally support for the bill. Due to the pandemic, there have been ongoing supply-chain disruptions causing grocery stores to have inconsistent inventory. But there are currently no nationwide food shortages or widespread supply-chain issues, according to the United States Department of Agriculture. 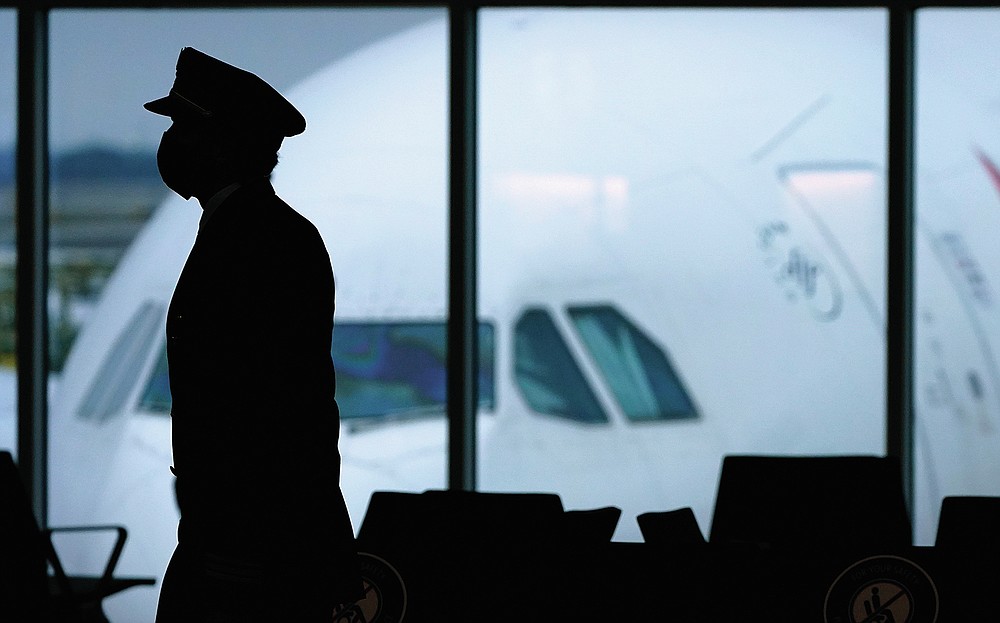 FILE - In this Thursday, Feb. 18, 2021, file photo, a pilot wears a face mask to help prevent the spread of the coronavirus as he walks through a terminal at Hartsfield-Jackson International Airport in Atlanta. On Friday, Oct. 22, The Associated Press reported on stories circulating online incorrectly claiming that vaccine-related strokes in pilots have caused an &#x201c;epidemic of plane crashes.&#x201d; (AP Photo/Charlie Riedel, File) 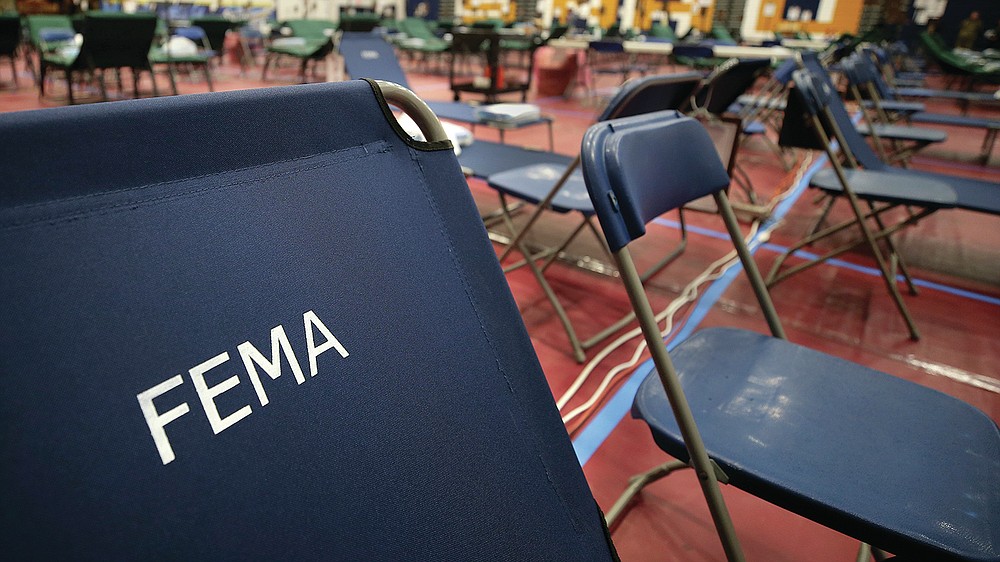 FILE - In this March 24, 2020, file photo, a portable cot with the Federal Emergency Management Agency logo FEMA printed on the backrest, along with other cots, line the basketball court at a makeshift medical facility in a gymnasium at Southern New Hampshire University in Manchester, N.H. On Friday, Oct. 22, The Associated Press reported on stories circulating online incorrectly claiming FEMA workers aren&#x2019;t subject to a vaccine mandate, and also falsely asserting that they&#x2019;re being used to replace health care personnel who refuse to comply with such mandates. (AP Photo/Charles Krupa, File)