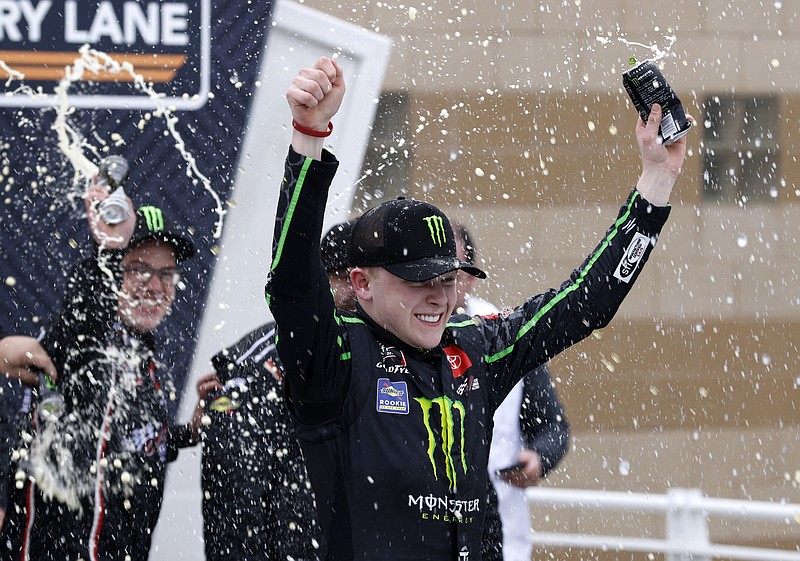 Ty Gibbs picked up his fourth Xfinity Series victory of the season Saturday and stopped title contenders AJ Allmendinger, Austin Cindric and anyone else from advancing to the championship round. Gibbs isn't eligible for the Xfinity Series championship, so all four spots in the finale remained open headed into next week's race at Martinsville Speedway. The 19-year-old grandson of the Hall of Fame team owner Joe Gibbs, Ty Gibbs will be in the Xfinity Series next season. For now, the driver is just a roadblock for the finalists for the Nov. 6 championship finale. Gibbs passed reigning champion Cindric with 10 laps remaining at Kansas to become the second non-playoff driver to win in this round of the Xfinity Series playoffs. Cindric finished second and Allmendinger was third, and neither has clinched on points yet.

Matsuyama on top at Zozo

Masters champion Hideki Matsuyama held on to a one-stroke lead at the PGA Tour's Zozo Championship on Saturday after a 2-under 68 which included a bogey on his last hole to make things interesting heading into the final round. Matsuyama trailed by a stroke after the first round, led by one after the second and had a 54-hole total of 10-under 200 on the par-70, 7,041-yard Narashino Country Club course in Chiba, Japan. Cameron Tringale, who also shot 68, trailed by three strokes going to the final hole Saturday but his birdie and Matsuyama's bogey reduced the lead to just one.

Steve Flesch birdied the par-4 18th hole for a 5-under 67 and a two-stroke lead over Bernhard Langer and Steven Alker on Saturday in the Dominion Energy Charity Classic, the first of three PGA Tour Champions playoff events. Flesch reached 13-under 131 with his second consecutive bogey-free round on The Country Club of Virginia's James River Course in Richmond. He has played the back nine in 9 under. The 54-year-old Flesch won the 2018 Mitsubishi Electric Classic for his lone senior title. He won four times on the PGA Tour. Langer, the 64-year-old German star who leads the Charles Schwab Cup points standings, also had a 67. He won the Richmond event in 2017. Ken Duke (Arkadelphia, Henderson State) shot a 69 on Saturday and is at 7-under 137, which is good enough for an eighth-place tie. Glen Day (Little Rock) was good for a 70 on Saturday and is at 3-under 141.

Lim breaks out in South Korea

Hee Jeong Lim took a four-stroke lead into the final round of the LPGA Tour's BMW Ladies Championship after a 7-under 65 Saturday. Lim had a 54-hole total of 18-under 198 on the LPGA International Busan course in Busan, South Korea. Fellow South Korean players Jin Young Ko (67) and Na Rin An (69) were tied for second. American Danielle Kang shot 69 and was five strokes behind Lim and tied for third. Gaby Lopez (Arkansas Razorbacks) completed Saturday's round with a 72 and is at 3-under 213 for the tournament.

Winther out front in Spain

Jeff Winther reclaimed the lead at the Mallorca Open in Santa Ponsa, Spain, with an 8-under 62 on Saturday. The Dane is two shots clear of Spain's Jorge Campillo, who had a third-round 64. Winther, seeking his first European Tour win, repeated the 62 from his first round after shooting 1-over par on Friday. He was bogey-free and had eight birdies, including the last three holes.

Ruoning Yin shot a 3-under 69 on Saturday to hold on to the LPGA Qualifying Tour lead. Yin is at 13-under 203 for the tournament, one stroke ahead of Pauline Roussin-Bouchard at the Plantation Golf and Country Club in Venice, Fla. Brooke Matthews (Rogers, Razorbacks) fired a 67 on Saturday and is at 5-under 211.

Green Bay Packers center Josh Myers has been placed on injured reserve after hurting his knee in a victory over the Chicago Bears. The Packers (5-1) announced the move Saturday. They also elevated guard Ben Braden from the practice squad to the active roster for today's game against Washington (2-4). Because he has been placed on injured reserve, Myers must miss at least the next three games. Myers, a rookie second-round pick from Ohio State, started each of the Packers' first four games before missing a 25-22 victory at Cincinnati on Oct. 10 with a finger injury.

Anett Kontaveit will face Ekaterina Alexandrova in the final of the Kremlin Cup after Maria Sakkari retired from her semifinal match with Alexandrova on Saturday. Sakkari was trailing 4-1 in the first set when she retired. Tournament organizers said she cited dizziness. Sakkari is ranked seventh in the world and secured a place at the season-ending WTA Finals earlier this week when she reached the quarterfinals in Moscow. Alexandrova reached her first tour-level final since winning the Shenzhen Open in January 2020 and has a 1-1 career record in finals. In today's final, Kontaveit will bid to win a third title in as many months after beating Marketa Vondrousova 6-3, 6-4 in the other semifinal match. The Estonian took a big lead early in both sets but took her time closing out the match on the fourth match point.

Ecuadorian Olympic sprinter Alex Quinonez was fatally shot Friday in the port city of Guayaquil. The death of the 32-year-old was confirmed by the Ecuadorian Olympic Committee and the Ecuadorian Athletics Federation. "The surprising departure of the bronze medalist of the last World Athletics World Cup [in Doha, Qatar in 2019] leaves a deep pain, but his legacy as the greatest sprinter in our history will forever remain in our hearts," the committee tweeted Saturday morning. According to the Ecuadorian newspaper El Universo, Quinonez was shot Friday night under circumstances that "have not yet been clarified." One other man was also killed in the incident. Quinonez became a national hero in 2012 after reaching the 200-meter final at the London Games and finishing seventh in a race won by Usain Bolt. 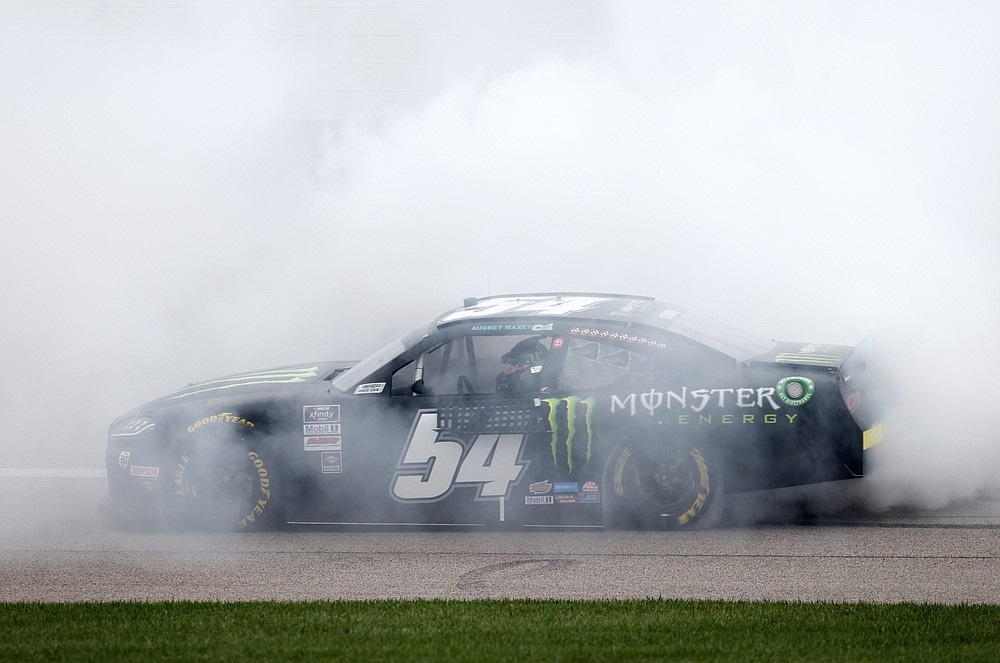 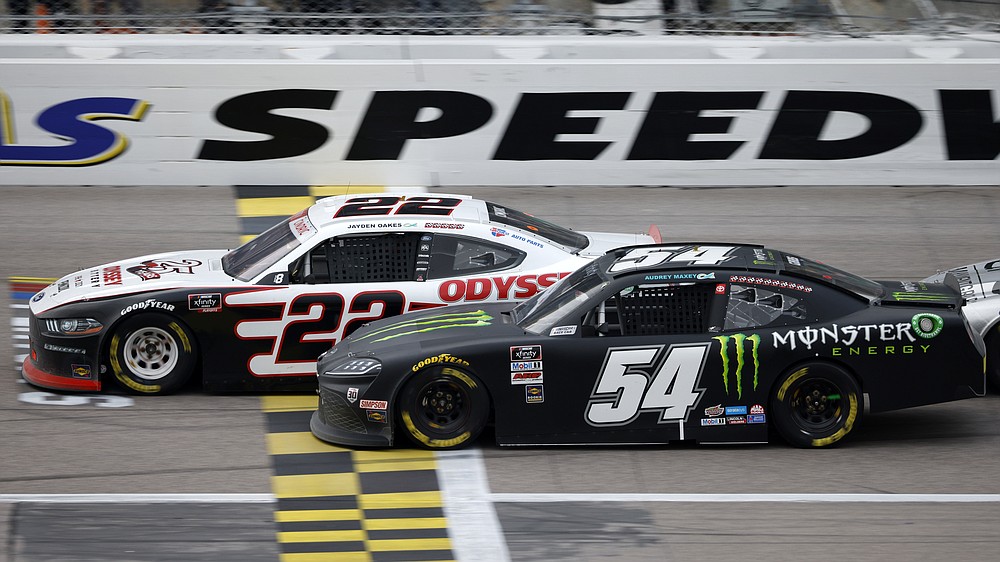