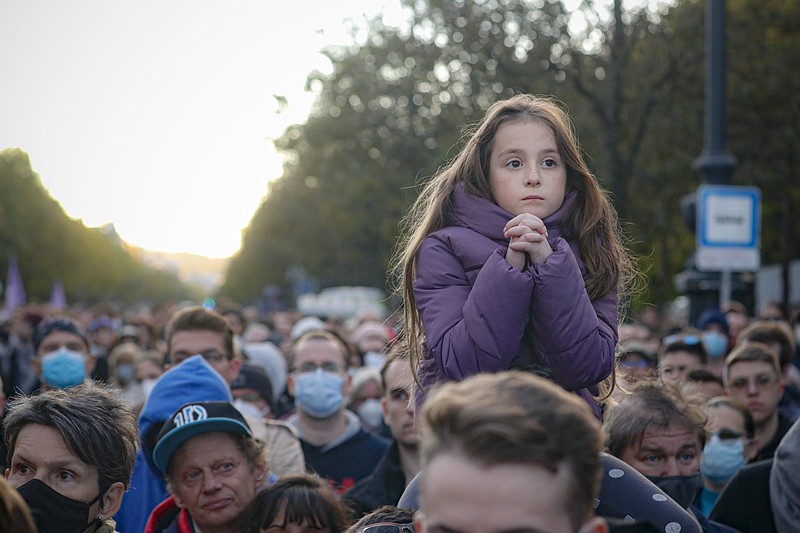 BUDAPEST, Hungary -- Tens of thousands of supporters of Hungarian Prime Minister Viktor Orban and his right-wing government marched Saturday in Budapest demonstrating unity behind his contentious policies that have led to challenges to his power both in Hungary and the European Union.

During the "Peace March," Orban painted a dark picture of what Hungarians could expect if he is defeated in a national election scheduled for next spring, expected to be the most serious challenge to his power since he took office in 2010.

He enumerated his government's economic achievements and blasted Hungary's previous socialist government which he accused of leading the country to financial ruin.

"It took us years to rectify the destruction of the left wing," Orban said. "The socialists and their leader have remained hanging around our necks."

The march was organized by nongovernmental organization Civil Unity Forum, an active promoter of the policies of Orban's Fidesz party, which has dominated Hungary's parliament with a two-thirds majority since 2010.

The group's chairman, Laszlo Csizmadia, told The Associated Press before the march departed that the event was meant to demonstrate Hungary's sovereignty to the EU, which he said had "undeservedly" attacked Hungary in recent attempts to rein in what the bloc sees as democratic backsliding.

"We think that we have a right to state our opinions in the long term in the European Union," Csizmadia said.

Orban also took aim at the EU, saying that Brussels had conducted a sustained attack on Hungary over its economic and immigration policies that have put his government at odds with the bloc's leaders.

"Dozens of prime ministers have attacked Hungary. We are still here, but who can remember even their names?" he said.

Orban's staunchly anti-immigration government faces increasing pressure both in Hungary and internationally. The EU, of which Hungary is a member, is considering imposing financial penalties on the country over concerns that Orban has eroded democratic institutions and the rule of law in pursuit of what he calls an "illiberal democracy."

At home, Hungary's six largest opposition parties have vowed to put aside ideological differences and form a coalition to challenge Orban's party in upcoming elections.

The parties argue the unity strategy is the only way to overcome a media environment dominated by government-aligned outlets and an electoral system unilaterally authored and passed by Fidesz which they say gives the ruling party an unfair advantage.

The six-party opposition coalition concluded a primary race last week where voters elected independent candidate Peter Marki-Zay to be Orban's challenger for prime minister on the unity ticket. A self-described conservative Christian, Marki-Zay has argued he can appeal both to Hungary's liberal voters and disaffected Fidesz supporters.

At a joint demonstration of the opposition parties Saturday, which drew several thousand supporters, Marki-Zay told the AP that he would lead the coalition in doing away with corruption, crackdowns on the media and abuse of government institutions he says has occurred under Orban's rule.

"Our basic goals for all of us, left and right, is for Hungary to be a democracy, to be governed by the rule of law in a market economy and as part of the European Union," Marki-Zay said.