OPINION | ON BOOKS: So many books to review, so little time ... 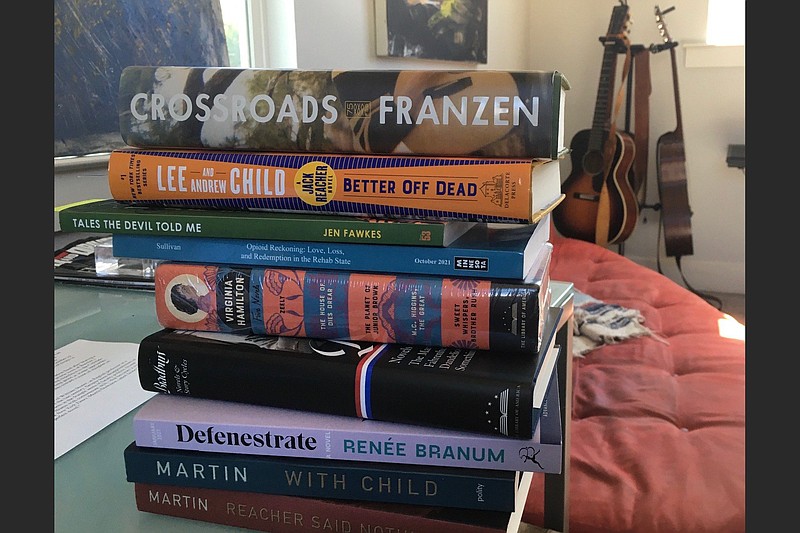 These are all the books the author decided, ahem, not to review this week. (Arkansas Democrat-Gazette/Philip Martin)

No one should complain about a job they're lucky to have. So please don't take this as a complaint. But it's not all sparkle-shine and gum drops on the bookies desk.

You would think it would be a cinch — write a book review every two weeks. Lots of authors and publishers send you books, for free; you pick through them and choose one and read it; then knock out about 800 words on what you think it's supposed to be about. Great gig, huh? Nothing to complain about.

Other times I find myself starting on a noble project — say, Jonathan Franzen's ambitious new novel "Crossroads" and, 100 or so pages in (to the 580-page book), I find myself diverted when my wife, Karen, directs my attention to a New Yorker article I simply have to read. So I read it instead of the Franzen I'm supposed to read that night.

Then, the next day, the new Jack Reacher novel by Lee (and his son Andrew) Child arrives. As I've written before, I'm not so much a fan of the Reacher books as I am fascinated by how they're put together.

Of the fairly targeted limited-interest books I've read in the past couple of years, two of them have been deep explorations of Child's process by University of Cambridge professor Andy Martin — 2020's "Reacher Said Nothing" and 2019's "With Child," both published by Polity, one of my go-to-presses for tightly targeted books of limited interest.

I just noted this blurb on the back of "Reacher Said Nothing": "'Dumbfounding' — The New Yorker." That's funny, and fair, and I bet that Martin, with whom I exchanged a few emails after writing about one or the other of these books in this column, enjoyed the New Yorker review. Which I will have to look up after I finish writing this column.

My interest in the Reacher books is something Andy Martin explains better than I can; I don't think they're good exactly, but I have a lot of respect for the craftsmanship of their author, who seems more like an engineer or metallurgist than an actual writer. (Maybe Lee Child is not really the pseudonym of James Dover Grant, but a code name for a special thriller production project made up of a consortium of creators who'd rather stay anonymous. Maybe Grant/Child is just the front.)

Anyway, I devoured the Reacher book. It's like eating ice cream; if you hang onto it too long your fingers get covered with goop. And it's been three days since I picked up the Franzen book (which is quite good, and earnest, and maybe as close as we get these days to the novels that I grew up with — the unmissable John Updike-John Cheever-Saul Bellow-Kurt Vonnegut sort we used to get a few times a year back in the '70s) and I probably should start over, or simply give it up because there's no way I can possibly finish it in time to write a column about it this week, and I don't know what to write because I've written about that phenomenon before, and my sense is that you're not going to change anyone's mind about those books. People either think Franzen is a great writer or a hack.

So I won't review the Reacher either.

Then there's this great debut novel "Defenestrate" by Renee Branum, and I think maybe I will dash off a quick review of that. But it turns out that it won't be published (by Bloomsbury) until January.

Also, I read Amy C. Sullivan's "Opioid Reckoning" as part of background research for another piece, which, editor willing, also runs in this section today. It's heartbreaking and illuminating and largely anecdotal, but two pieces on the opioid epidemic might be too much for one week.

There are three recently released volumes from the Library of America, a nonprofit publisher close to my heart. I'm thinking of doing a longer essay on Ray Bradbury — who was honored by the publication of "Bradbury: Novels and Story Cycles," which is composed of "The Martian Chronicles," "Fahrenheit 451," "Dandelion Wine" and "Something Wicked This Way Comes" — than this space allows.

And while I am genuinely interested in it, I haven't cracked the seal on "Virginia Hamilton: Five Novels," which might change my mind about so-called "young adult" literature, and "John Williams: Collected Novels," published last week, which includes "Butcher's Crossing" (1960), "Stoner" (1965), and "Augustus" (1972).

"Stoner," which I read many years ago, is remarkably precise and measured, a novel of genuine tenderness. I need/want to reread it.

I also read a couple of stories in Jen Hawkes' new collection "Tales the Devil Told Me." I reviewed her last book, and have been friends with her husband for three decades, so maybe I should refrain from heaping more praise on this Porter Prize winner.

Oh, and it's playoff baseball time.