Too much taxpayer money not flowing down to needs, Democratic governor hopefuls say 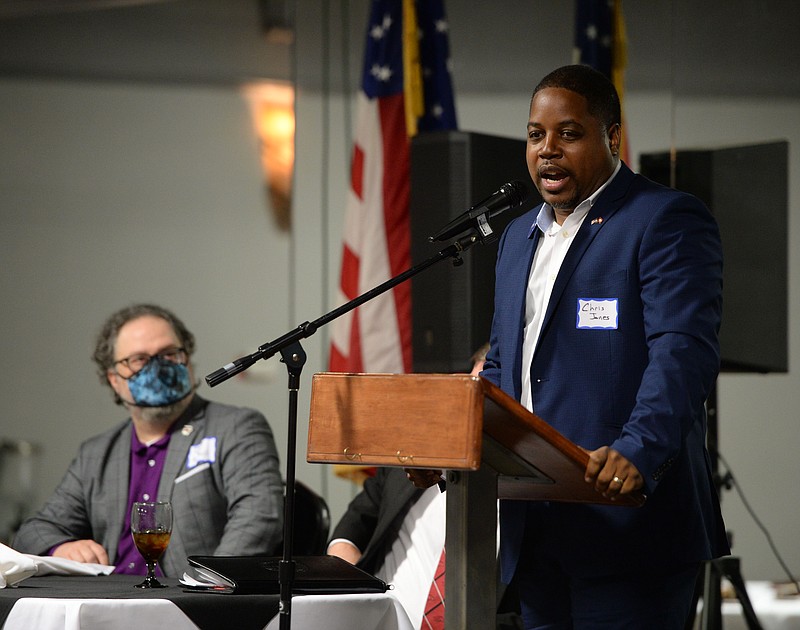 Three of the four announced candidates in the May 24 Democratic gubernatorial primary attended the meeting of the Northwest Arkansas Political Animals Club.

Jones and Russell attended the meeting in person while Bland joined by video. Xayprasith-Mays was invited but unable to attend, according to the event organizer.

Russell told the audience that he sometimes helps his father distribute drinking water to Arkansans who have no safe supply and who live in northern Arkansas. Arkansans lack basic necessities like this, necessities state and local governments should help provide.

Instead, the state has a $1 billion budget surplus and county governments have unspent money provided by federal taxpayers for pandemic relief, he said. Meanwhile the Legislature is expected to go into special session later this year to cut income taxes.

Bland and Jones emphasized that the state needs a governor with experience outside of government and politics, someone familiar with constituents' struggles and willing to listen.

After their speeches, Jones and Russell acknowledged in interviews the challenges for a Democratic candidate are steep. Gov. Asa Hutchinson, a term-limited Republican, received 65.3% of the vote in the 2018 election.

"It's an uphill battle, but I think there's a really good chance when you look at the complexity of the challenge," Jones said. "When you look at Arkansas, you don't see a Republican state. You see a non-voting state."

Voter participation in elections is too low, and that needs to change, he said.

Bland said the election will show how much voters want change.

"If Arkansas wants real change, we will and can make it happen together no matter the smoke screens that are being put in our faces," he said in a statement after the meeting.

Russell agreed in an interview after the meeting.

"I know how bleak it looks," Russell said in an interview. "But in my heart of hearts, I think people are tired of being lied to."

The candidates were not the only ones seeing a steep challenge for Democrats.

"I think they're fighting a lot of headwind," said audience member David Stewart of Fayetteville. Stewart said he was most impressed with Jones, whom he described as articulate and direct in his answers.

The governor's term of office is four years. The governor's salary is $154,115 a year, the state's top-paid constitutional officer.