Trolley To Terror! History gives way to mystery for one night only 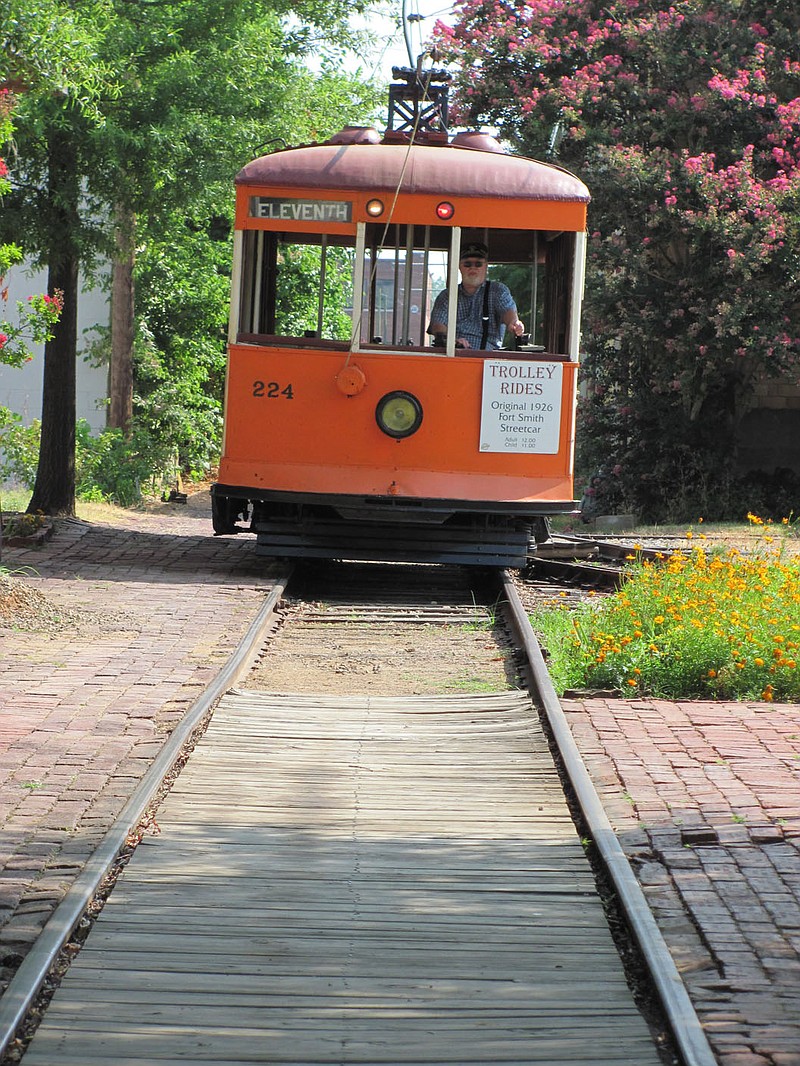 The restored trolley No. 224 that once rode the rails in Fort Smith in the early 20th Century trundles down the tracks toward the trolley station near the Fort Smith Trolley Museum.Arkansas Democrat-Gazette/DAVE HUGHES

The story of the streetcar begins in Fort Smith in 1883, when the Fort Smith Railway Company offered the area's first public transportation via three mule-drawn rail cars.

Ten years later, two electric trolleys began operation, and by 1911, streetcars were enclosed for passengers' comfort. In 1920, a new, lighter car called the Birney "safety car" joined the fleet, complete with under-seat electric heaters, a luxury in cold Arkansas winters along the river.

Of course, the days of the streetcar were numbered from the beginning. In 1933, the Fort Smith Traction Light & Power Company, by then a subsidiary of Oklahoma Gas & Electric, was operating at a loss, and on Nov. 15, the last trolley took its turn on the rails.

According to the website of the Fort Smith Trolley Museum, "after the last run, all of the cars were quickly scrapped; motors and wheels were removed for salvage, and bodies sold off and used for assorted purposes. Within a few years, all 33 miles of Fort Smith's trolley track were ripped up and sold for salvage."

But not everyone in the River Valley forgot about the streetcars that once carried passengers throughout downtown Fort Smith. The Fort Smith Trolley Museum opened in 1985 and began operating a short streetcar line in 1991. Beloved local artist John Bell Jr. designed a mural remembering the heyday of the trolleys, and he also depicted streetcars in many of his iconic works, including "Sanctuary."

Thirty-six years later, the Fort Smith Trolley Museum operates a streetcar every weekend, year round -- and its flagship is the same Birney Safety Car No. 224 that brought luxury to the trolley line in 1920. It was recovered from Ashdown, Ark., where it spent years as a diner named the Streetcar Cafe.

"We have an assortment of rail cars -- four cabooses, several box cars and a diner," says Bradley Martin, president of the Fort Smith Trolley Museum. "There is also a collection of motor cars, and we have several original rail-related paintings and a large collection of John Bell prints on display. The 5 & 10 Museum store stocks John Bell prints, and note cards, rail books, clothing and toys, and the museum has an excellent rail-related library. There is a large HO gauge model railroad being constructed."

Riding the streetcar means a 1-mile journey "from the Bass Reeves statue to the Fort Smith Museum of History and the Fort Smith Historic Site," Martin says, "then to the Trolley Museum. The track then follows along the National Cemetery wall and passes in front of the National Cemetery. It then crosses Wheeler Avenue to The Bakery entertainment district and follows Seventh Street to the 1937 Sebastian County Courthouse and the Wyndham hotel on Rogers Avenue."

From 5 to 8 p.m. Oct. 30, however, goblins, ghosts, witches and monsters will be on the ground at the Fort Smith Trolley Museum, as the museum's volunteers join forces with the Pay It Forward Fort Smith food pantry for the second year of the Fright Night Fling.

"The event has many vendors passing out candy, there is a haunted tent, and many characters [will be] dressed in costume," Martin says. "It is all free to those who attend. All ages enjoy this event."

According to publicity for the party, there will also be a chance to dance to Michael Jackson's "Thriller" and to "meet the man over 7 feet tall."

"We're having a party, you're in for a scare.

"It's a Halloween bash, so dress up if you dare!" 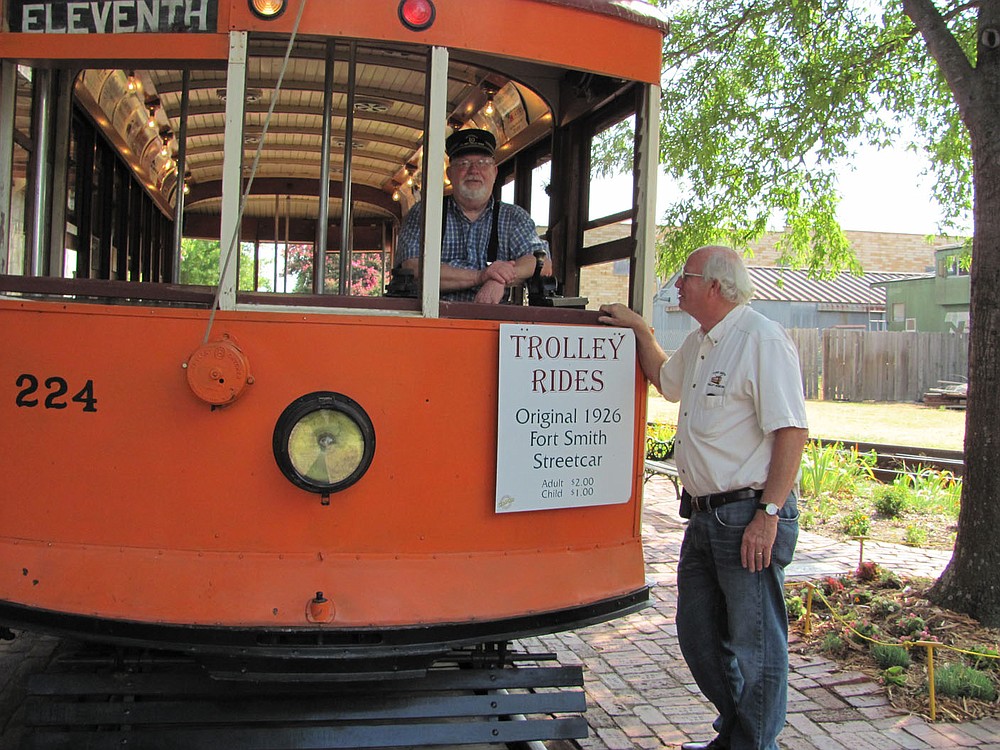 Fort Smith Trolley Museum Manager Bradley Martin, right, talks with volunteer operator Bill Buchanan during a stop at the trolley station behind the museum. The restored trolley No. 224 once trundled down the streets of Fort Smith in the early 20th Century.Arkansas Democrat-Gazette/DAVE HUGHES 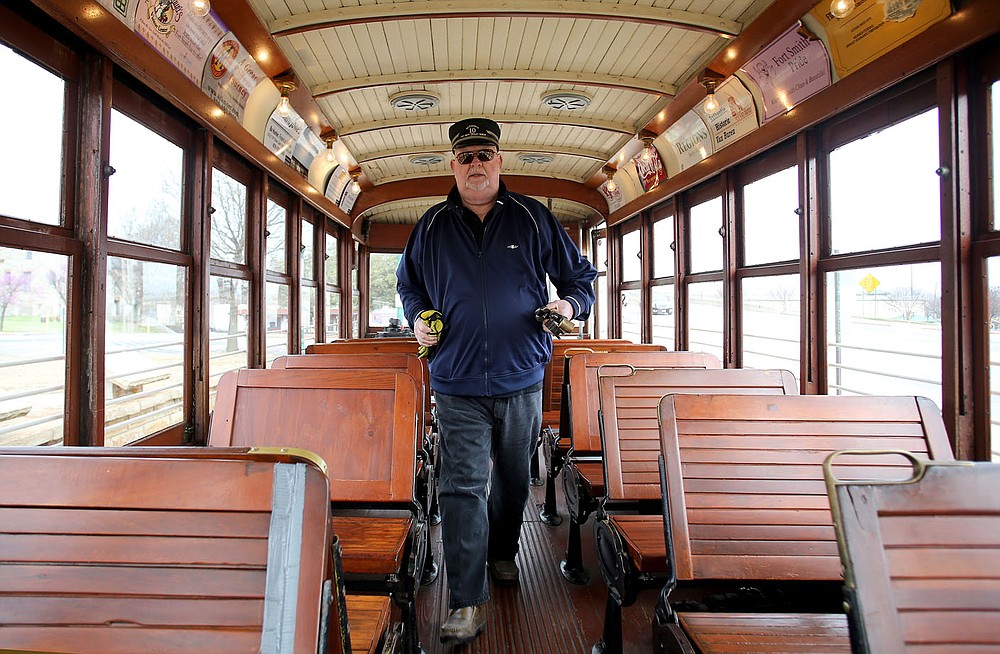 NWA Democrat-Gazette/DAVID GOTTSCHALK Bill Buchanan, a volunteer streetcar motorman with the Fort Smith Trolley Museum, carries the key and operating tools to the other end of the Birney Streetcar Monday, March 26, 2018, to reverse directions before driving onto 3rd Street from Garrison Avenue in Fort Smith. Streetcars operated in Fort Smith from 1883 to 1933. Buchanan was driving a streetcar built in 1919. The museum and streetcar operate on donations and grants.
More News