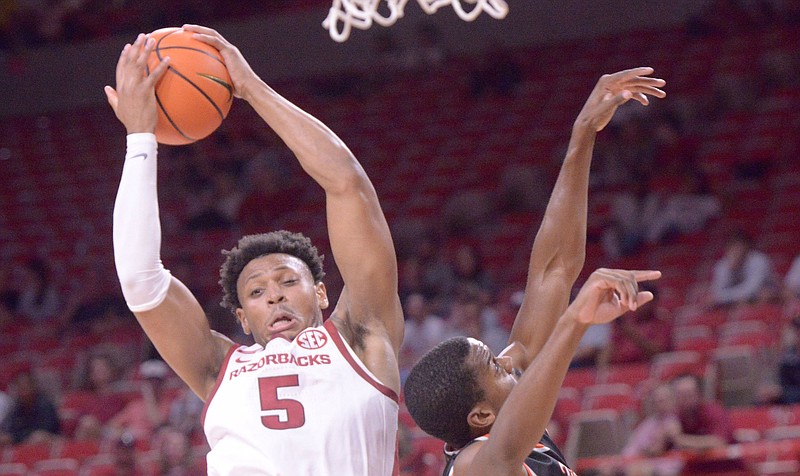 Au’Diese Toney of Arkansas comes down with a rebound in Sunday’s exhibition opener against East Central (Okla.) University on Sunday at Walton Arena in Fayetteville. Toney had 15 rebounds as the Razorbacks rallied from a 14-point deficit to win 77-74. (NWA Democrat-Gazette/J.T. Wampler)

FAYETTEVILLE -- The Arkansas Razorbacks won their exhibition basketball opener on Sunday, but hardly in the manner expected.

The Razorbacks, ranked No. 16 in The Associated Press preseason poll, had to rally from a 14-point deficit in the final 11 minutes to beat East Central (Okla.) University 77-74 in Walton Arena.

What figured to be a blowout victory for the University of Arkansas against an overmatched NCAA Division II opponent instead turned into a nail-biter.

"The media hype is nothing," Razorbacks senior forward Au'Diese Toney said of the national ranking. "You've still got to come out and play and deserve what you get.

"Now we know moving forward that we have a lot of work to do. That's why we take these games and learn from them."

For much of the game it looked like East Central deserved to win as the Tigers went ahead 60-46 with 11:02 to play on Jakeem Acres' driving basket and free throw after he was fouled by Jaylin Williams.

The Razorbacks then went 6 for 6 on free throws the final 50.9 seconds with Davis, Lykes and JD Notae hitting two each and held on to win when Romello Wilbert's three-point attempt missed the basket at the buzzer.

"I think, number 1, we're trying to figure out who we are," Arkansas Coach Eric Musselman said when asked what happened to his team. "I think the role development aspect is where we're at."

Toney, a graduate transfer from Pittsburgh who had 10 points and 15 rebounds, is among five newcomers -- including three starters -- who played for the Razorbacks.

"Our four-spot I'm concerned about, obviously, without having Kamani and Trey," Musselman said. "Those two guys are our primary four-men. So I do think we miss them a little bit."

Musselman said Wade and Johnson won't play in Saturday's second exhibition game against North Texas, but they should be ready to return for the season opener against Mercer on Nov. 9.

Davis, a sophomore guard who started the final 14 games for the Razorbacks last season, had a team-high 20 points. Notae, a senior and the SEC's sixth man of the year last season, added 17 points. Lykes, a senior graduate transfer from Miami had 13 points.

Despite the scoring from Davis, Notae and Lykes, Musselman said he's also concerned about their play at point guard considering the Razorbacks had nine assists compared to 10 turnovers. Sophomore Khalen Robinson, who has been limited in practice because of a foot injury that sidelined him last season and played six minutes Sunday, also is an option at point guard.

"Point guard play, I kind of let it go and have watched it [in practice]," Musselman said. "Now I've got to do something about it and figure out how we can become a team that gets more out of the point guard spot."

"I am shocked how poorly we shot the ball from the foul line and from three," Musselman said. "There are fifth-grade CYO teams that can shoot that good from the foul line. We have to improve as a free throw shooting team and we'll do that."

Stanley Umude, a senior graduate transfer guard from South Dakota who started along with Toney, Davis, Notae and Williams, shot 1 of 6 from the field and had 2 points in 17 minutes.

East Central led 37-35 at halftime and continued to outplay the Razorbacks for the first nine minutes of the second half.

"It's a simple fact that anybody can play and beat and beat anybody if they want it more," Toney said. "And it is obvious they came out the first half and wanted it more than we did and we got too relaxed.

"The second half we picked it up and got our edge back on defense. That's our bread and butter and that's obviously why we came out with the win."

Williams, a sophomore forward, was a catalyst on defense and finished with 10 points, 9 rebounds, 3 blocked shots and 2 steals.

"Jaylin was the biggest key of the comeback really," Toney said. "Blocking shots and just keeping the ball out of the rim. He gave us that spark."

The Tigers hit 8 of 23 three-pointers to outscore the Razorbacks by 18 points from beyond the arc and made 14 of 17 free throws.

"I thought they played so hard," Musselman said. "I'm proud of Max."

Musselman, who is known for his extensive scouting reports, said the coaching staff did no preparation for East Central.

"This is the first time I have ever done a game and not scouted at all," Musselman said. "The one thing I just told the staff, 'Maybe our preps do help us a little more than I give them credit for.' "

Musselman said based on the Razorbacks' practice earlier Sunday, he expected them to play much better.

"It was so good that we knocked off the last 15 minutes of shootaround because I thought we had good energy," he said. "You can rest assured that we will never take off 15 minutes of our shootaround ever again with this group of players.

"We'll probably add on an extra hour of shootaround on game day. I thought that they were ready coming in. Maybe some nerves. I don't know." 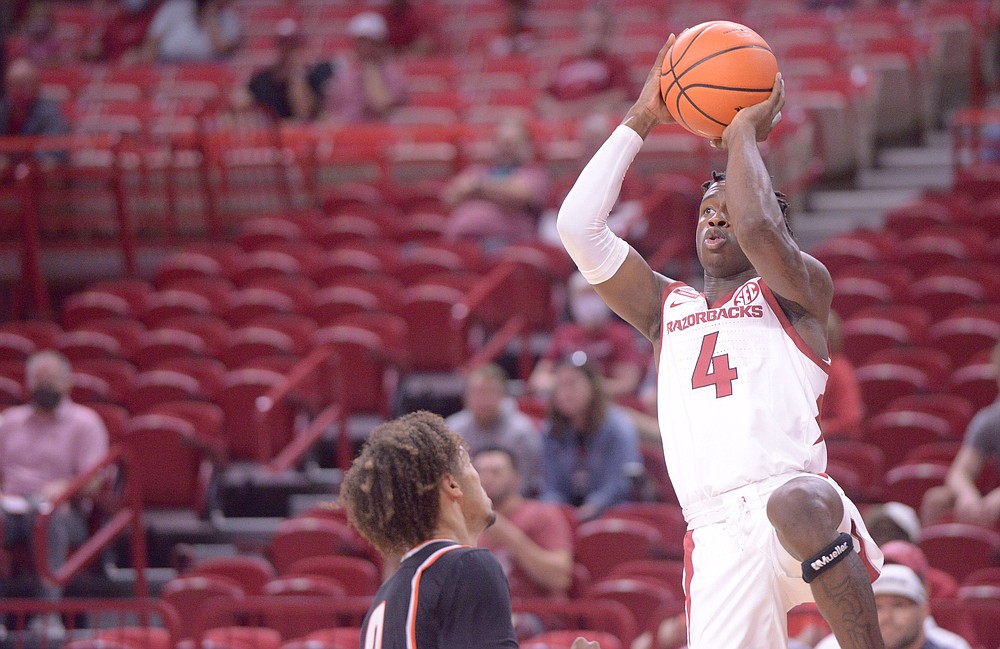