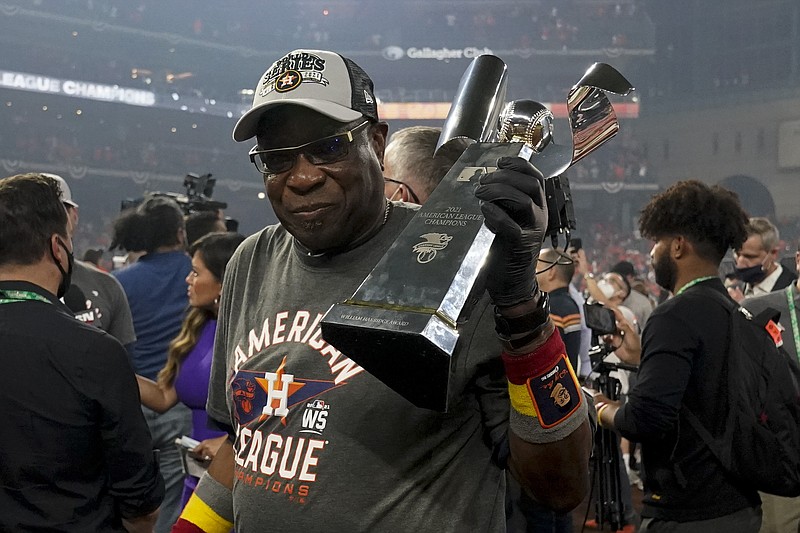 And the endless quest for Mr. Dusty Baker.

Braves-Astros, a lot to savor in this World Series -- even a family faceoff. Atlanta Manager Brian Snitker's son, Troy, is a Houston hitting coach.

"It's like the Snitkers are going to have a World Series trophy in their house here," dad said Saturday night. "I don't know who is going to own it, but we're going to have one. So that's a pretty cool thing, too."

A matchup six decades in the making, pairing former National League rivals who've played more than 700 times, including five postseason series. Think of The Hammer and The Toy Cannon teeing up home run derby at the Astrodome, or Greg Maddux, Tom Glavine and John Smoltz vs. Jeff Bagwell and Craig Biggio on a June evening on TBS.

Because of scheduling and covid-19, the Astros and Braves haven't seen each other since 2017. They'll now meet for Game 1 on Tuesday night at Minute Maid Park, with Valdez starting against Charlie Morton, a former Houston ace.

The Astros opened as a 3-2 favorite, according to FanDuel Sportsbook.

But before we begin, let's just say it: There are many baseball fans who might not be thrilled to see either team here in late October.

Altuve and Astros teammates Carlos Correa, Alex Bregman and Yuli Gurriel will forever wear the label of cheaters after being part of a team that devised an illegal, sign-stealing scheme on its way to the 2017 championship.

At home, they're cheered. At every other ballpark, they're heckled -- and worse -- as the game's worst villains.

"Ever since the news came out, the bad news that we've had to deal with about what happened in 2017, I think we've all wanted to prove what kind of class of players that we are and team that we are," AL Championship Series MVP Yordan Alvarez said.

"I wasn't here with the team in 2017, but I've gotten booed just as equal as anybody else. So I think we all have the same mentality that we really want to win a World Series to demonstrate that we are just a great team," he said.

When the scene shifts to Atlanta next Friday, Houston will figure out how to keep Alvarez's bat in the lineup as the DH or no DH debate is revived in the World Series.

The Astros are in the Fall Classic for the third time in five years and got there minus ace Justin Verlander, who missed the season while recovering from Tommy John surgery.

The Braves overcame a season-ending knee injury to dynamic star Ronald Acuna Jr. in July and surged after being stuck at 52-55 in early August. Boosted by NL Championship Series MVP Eddie Rosario, Atlanta is making its first appearance in the World Series since 1999.

Yet while the roster and stadium have changed, the sights and sounds in Atlanta still remain. Throughout the NLCS, fans at Truist Park emphatically chopped and chanted during big moments for the Braves.

In an era of social reckoning that saw the Cleveland Indians change their name to the Guardians and Washington's NFL team get rid of a name considered racist, the scene in Atlanta is sure to draw increased attention.

He won the World Series as a player with the Los Angeles Dodgers in 1981 and has taken five teams to the playoffs as a manager but never won the crown.

Baker took this job in 2020 in the wake of Houston's cheating scandal -- "there's a few things I still hadn't accomplished" -- and at 72, with a lifetime of credentials, gets another chance.

"Last year I felt like a substitute teacher, really. I was an outsider," Baker said. "But this year, they made me feel like I was one of them and they were definitely always one of me. That's what it's all about. Everybody talks teamwork, they talk about a team, but it's a feeling that you get for each other."

Baker's history in this matchup runs especially deep. Playing with Braves great Hank Aaron in 1968, he got first major league hit at the Astrodome in a loss to Jimmy Wynn and Houston.

Over the years, these teams met a lot, starting when the 1962 expansion Houston Colt .45s took on the Milwaukee Braves. There were the days of catcher Joe Torre trying to throw out young Joe Morgan, the Niekro brothers pitching against each other and fireballing Nolan Ryan facing Dale Murphy.

The .45s became the Astros in 1965 and from 1997-2005, the clubs played five times in the NL division series, with Atlanta winning three of the matchups. Houston moved from NL Central to the AL West in 2013.

Snitker certainly followed all of them. The 66-year-old Atlanta manager has spent four decades in the Braves' organization as a player, coach and skipper.

He tuned in Friday night when the Astros and son Troy beat Boston in the clinching Game 6 of the ALCS.

"That was neat. Proud of him. Got to FaceTime with him. Watched the celebration," he said, hours before the Braves finished off the Dodgers in Game 6 of the NLCS.

"I told him the first time, it's not this easy, you know, it's really hard to get there, as we're seeing. But it's been a great experience for him and I'm happy for him. I said, I hope I can join you," he said.

Hours later, he and the Braves were on their way. 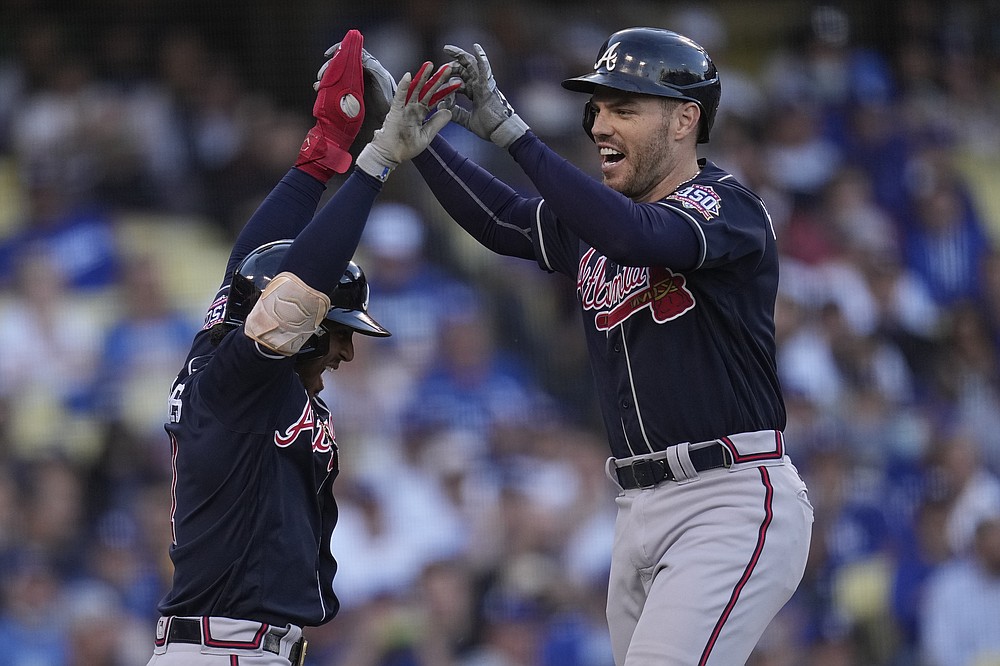 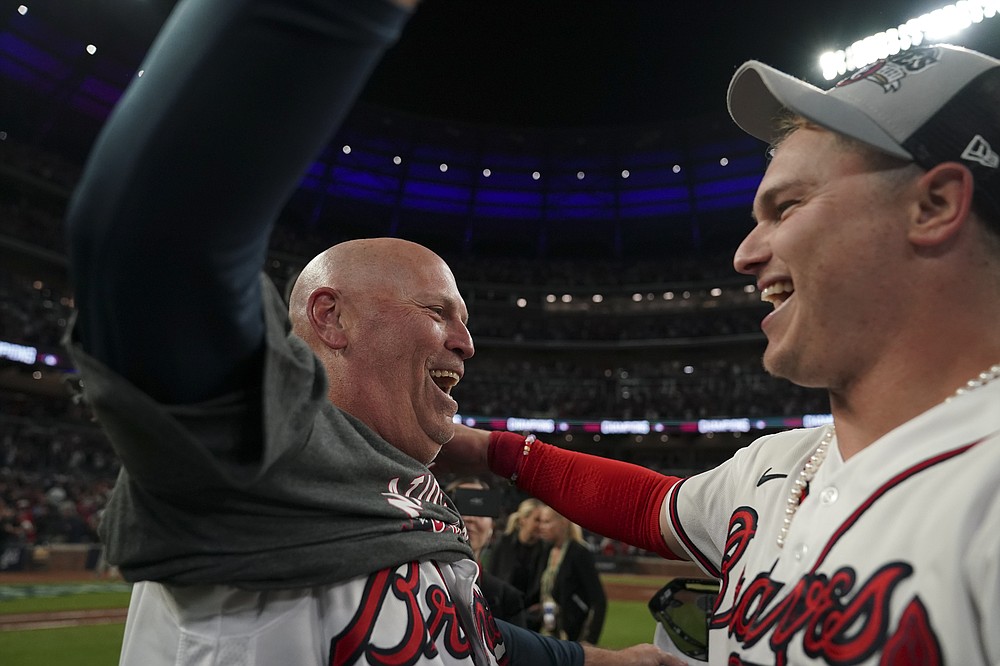 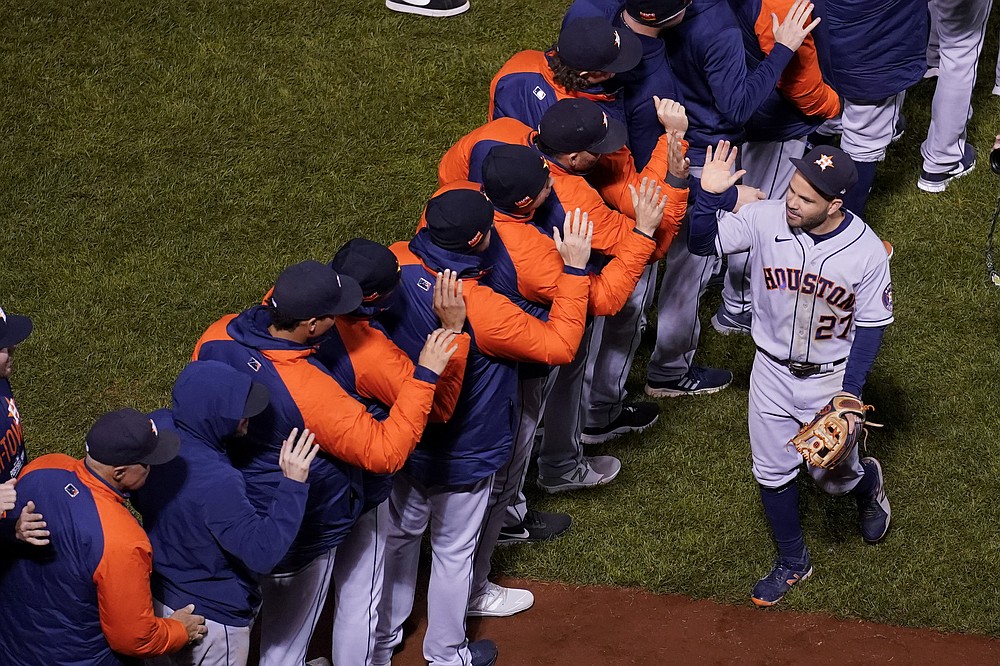 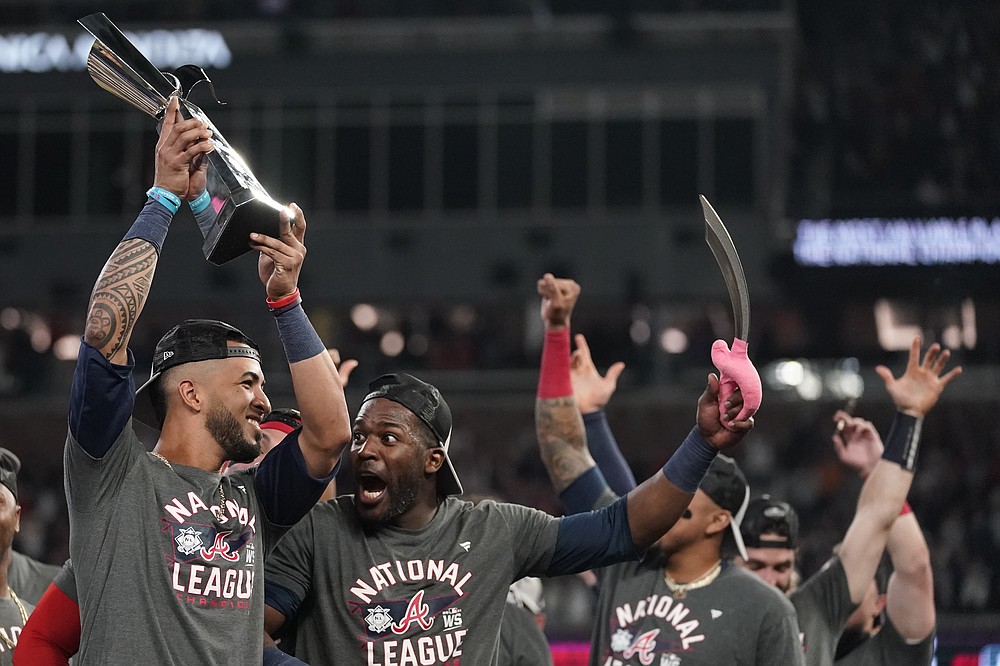 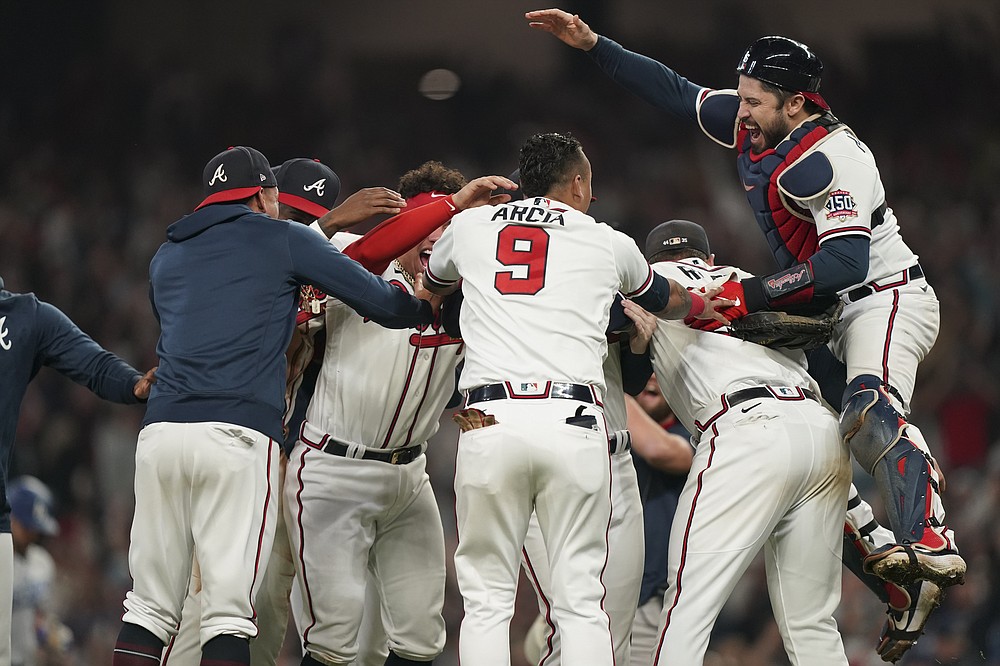 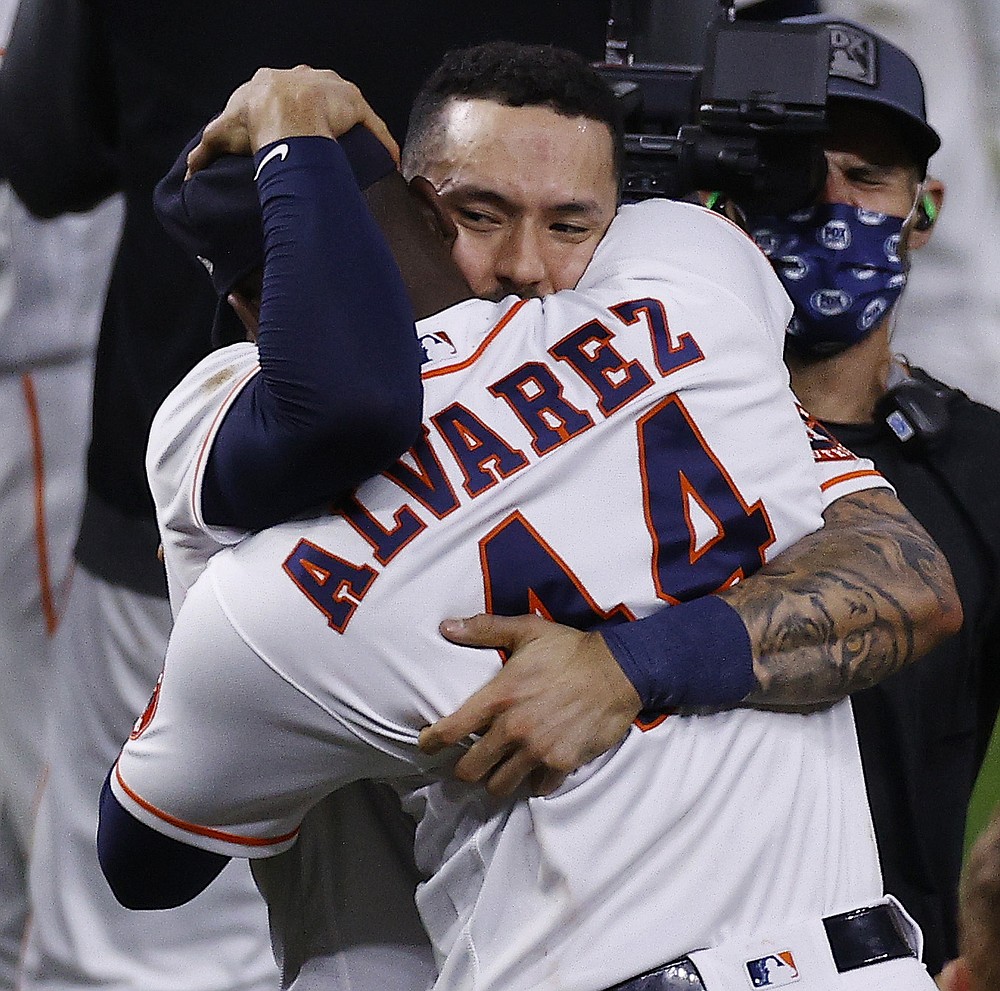 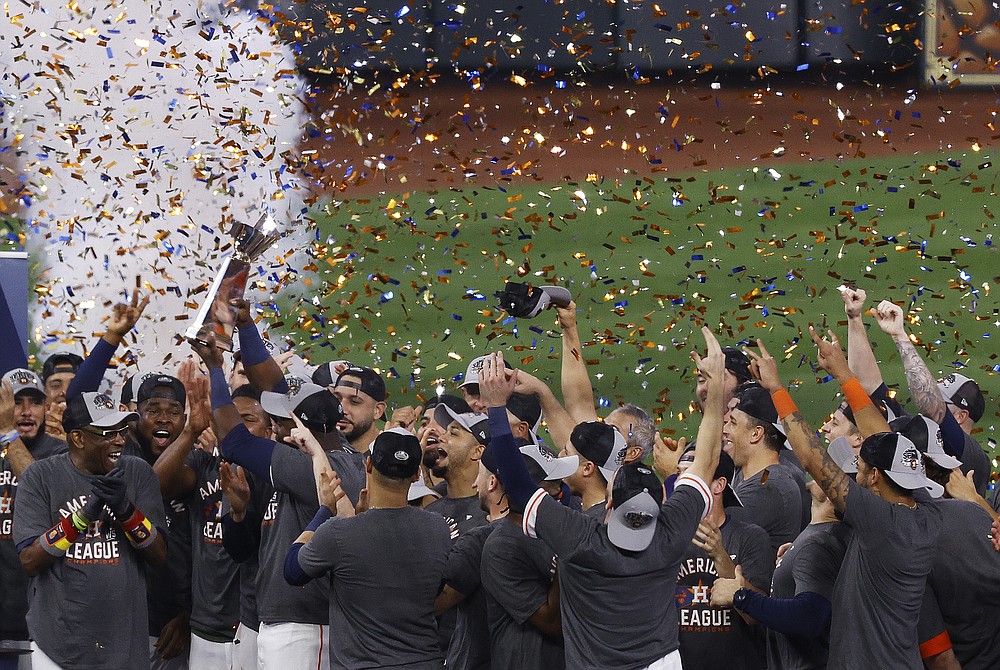