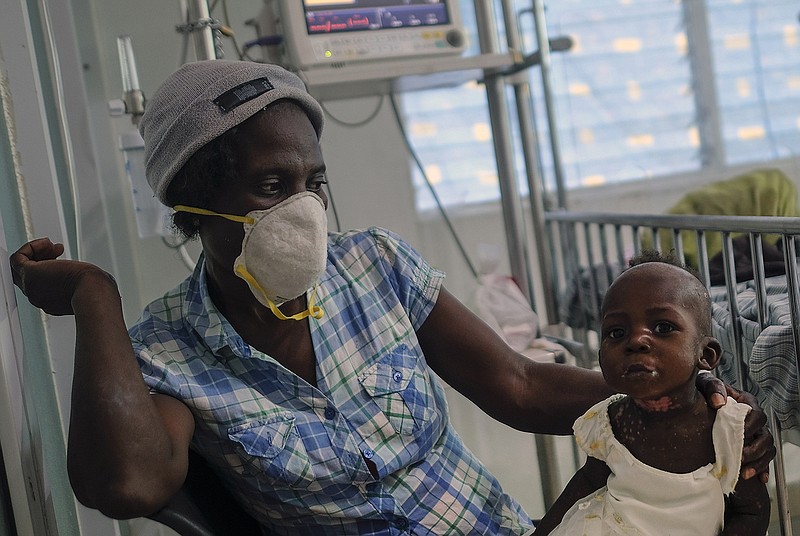 A covid-19 patient rests on her mother’s leg Sunday at the St. Damien Pediatric Hospital of Port-au- Prince, Haiti. Haiti’s capital has been suffering from fuel shortages, and the capital’s main pediatrics hospital says it has only three days of fuel left to run ventilators and medical equipment. (AP/Matias Delacroix)

Fauci projected a timetable for young Americans to be vaccinated with at least one dose by Thanksgiving and to be fully immunized by the December holidays.

Food and Drug Administration regulators Friday released their evaluation of data from the Pfizer-BioNTech submission for emergency authorization of a lower-dose vaccine for young children. An advisory panel to the FDA will consider Tuesday Pfizer's application for those ages five to 11.

Also Sunday, a New York Times tracker showed the United States, despite having a surplus of doses, has fully vaccinated only 57% of its population -- although 79% of U.S. adults have gotten at least one dose. The percentage lags that of many other nations.

Children 12 and older have been eligible for vaccination since May.

Pfizer's data looks "good as to the efficacy and safety," Fauci said on ABC's news program "This Week," which aired Sunday.

[Video not showing up above? Click here to watch » arkansasonline.com/1025fauciabc/]

According to Pfizer and BioNTech, the children who were vaccinated as part of the trial, receiving doses that were one-third the size of the adult doses, developed robust immune responses after receiving the regimen of two shots three weeks apart. The companies have said the efficacy rate of the vaccine in children reduced the risk of developing a symptomatic infection by 91%.

The most common side effects in children were fatigue, headache, muscle pain and chills. According to the FDA, the data submitted indicated no cases of myocarditis inflammation of the heart muscle, or pericarditis, inflammation of the outer lining of the heart, rare complications that have been reported among young boys and men receiving the vaccine in other trials and in real-world applications.

Dr. Rochelle Walensky, director of the Centers for Disease Control and Prevention, was also interviewed about the upcoming decisions on child vaccines on two Sunday news shows and seemed to promise that decisions would not be delayed. "We know how many parents are interested in getting their children vaccinated, and we intend to work as quickly as you can," Walensky said on "Fox News Sunday."

The past week has produced much regulatory guidance for those who can receive booster or additional doses of covid vaccines, giving a large segment of the U.S. population access to more protection.

Walensky and Fauci sought to dispel confusion about booster shots and explain the option of "mixing and matching" initial vaccines and boosters.

Boosters of all three vaccines available in the United States have been authorized. Additional shots of Pfizer and Moderna mRNA vaccines have been approved for people ages 65 and older, those with underlying health conditions, and all adults whose living or working conditions place them at high risk of exposure to the virus.

Anyone over the age of 18 who received the single-dose Johnson & Johnson vaccine at least two months ago is also eligible for a booster shot. People can receive a booster shot that is different from the initial vaccine they first received, experts said.

"If you were originally vaccinated with one product, could you and would it be appropriate and safe and effective to get boosted in the third shot for the mRNA and the second shot for J&J by another product?" Fauci said. "The answer is it's perfectly fine."

BACK OF THE PACK

The U.S. was one of the first countries to begin vaccinating its population, and by summer, was leading most nations in getting shots in arms, with 67% of the population receiving at least one shot by July 4. That's significantly lower than others, a survey finds.

Today, 87% of people in Portugal are fully vaccinated, according to the Our World in Data project at Oxford University.

That rate is second only to that of the United Arab Emirates, a far smaller country whose rulers exert considerably greater control. Earlier this month, Portugal ended nearly all of its coronavirus restrictions.

Resistance remains high among some demographic groups and within some specific workforce sectors, including police officers and firefighters.

That has left the United States lagging behind dozens of nations in the pursuit of full vaccination. Although, with a population of about 330 million, it ranks third in the sheer number of administered doses, more than 411 million, after China's more than 2.2 billion doses and India's more than 1 billion.

Other early vaccination leaders have also stumbled. Israel got an early start on its vaccination campaign Dec. 20 and rapidly outpaced virtually every other nation in getting jabs into arms -- and now in giving booster shots to nearly half of its eligible population.

But today, with hesitancy remaining among Arab, Orthodox Jewish and younger Israelis, the country reports that just 63% of its population is fully vaccinated, less than South Korea, Italy and some 40 other countries.

Public health experts blame the shortcomings of the U.S. effort partly on a toxic political environment, amplified by misinformation on social media and muddled messaging by government authorities.

"Every country has an anti-vax movement, but in most countries it's exceedingly small," said Dr. John Swartzberg, a professor at the School of Public Health at the University of California at Berkeley who has taught a seminar on vaccine hesitancy for several years. "It's not a new movement, but it's never had the traction it has today."

Social media has been "irresponsible" in dealing with unfounded rumors, he said, and the United States has been "the poster child of a country that has not handled the messaging about vaccines."

A lack of trust in authorities and expertise, along with deep political polarization, also played a key role in hampering the U.S. vaccination effort, said Dr. Michael Lauzardo, deputy director of the University of Florida's Emerging Pathogens Institute.

In Asia, part of the turnaround comes from countries finally securing supplies and working out the kinks in their vaccination programs.

In countries like France, Italy and Canada, officials began requiring people to use health passports to show proof of vaccination to enter many establishments, a move that is credited with improving their vaccination efforts.

"We do not have the barriers of supply or distribution or access to the vaccine," said Dr. Leana Wen, a public health professor at George Washington University. "The only barrier at this point is people's willingness to be vaccinated. That's what's going wrong compared to other countries that have solved their supply, distribution and access issues."

Information from this article was contribued by Roni Caryn Rabin, Azi Paybarah, Vimal Patel and Andrea Kannapell of The New York Times.