Lower rates cost utilities in missed safety measures by DOUGLAS MacMILLAN AND WILL ENGLUND THE WASHINGTON POST | October 25, 2021 at 7:12 a.m. 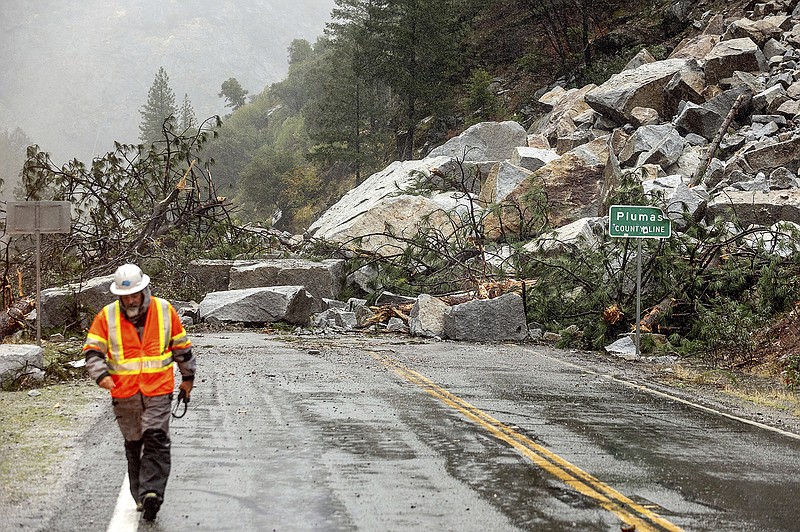 WILMINGTON, N.C. -- Across the nation, severe weather fueled by climate change is pushing aging electrical systems past their limits, often with deadly results.

Last year, the average American home endured more than eight hours without power, according to the U.S. Energy Information Administration -- more than double the down time five years ago.

This year alone, a wave of abnormally severe winter storms caused a disastrous power failure in Texas, leaving millions of homes in the dark, sometimes for days, and at least 200 dead. Power failures caused by Hurricane Ida contributed to at least 14 deaths in Louisiana, as some of the poorest parts of the state suffered through weeks of 90-degree heat without air conditioning.

Every time a storm lashes the Carolina coast, the power lines on Tonye Gray's street go down, cutting her lights and air conditioning. After Hurricane Florence in 2018, Gray went three days with no way to refrigerate medicine for her multiple sclerosis or pump the floodwater out of her basement.

"Florence was hell," said Gray, 61, a marketing account manager and Wilmington native who finds herself increasingly frustrated by the city's vulnerability.

"We've had storms long enough in Wilmington and this particular area that all power lines should have been underground by now. We know we're going to get hit."

As storms grow fiercer and more frequent, environmental groups are pushing states to completely reimagine the electrical grid, incorporating more batteries, renewable energy sources and localized systems known as "microgrids," which they say could reduce the incidence of wide-scale failures.

Of $15.7 billion in grid improvements under consideration last year, regulators approved only $3.4 billion, according to a national survey by the NC Clean Energy Technology Center -- about one fifth.

After a weather disaster, "everybody's standing around saying 'why didn't you spend more to keep the lights on?'" Ted Thomas, chairman of the Arkansas Public Service Commission, said in an interview with The Washington Post. "But when you try to spend more when the system is working, it's a tough sell."

A major impediment is the failure by state regulators and the utility industry to consider the consequences of a more volatile climate -- and to come up with better tools to prepare for it. For example, a Berkeley Lab study last year of failures caused by major weather events in six states found that neither state officials nor utility executives attempted to calculate the social and economic costs of longer and more frequent outages, such as food spoilage, business closures, supply chain disruptions and medical problems.

"There is no question that climatic changes are happening that directly affect the operation of the power grid," said Justin Gundlach, a senior attorney at the Institute for Policy Integrity, a think tank at New York University Law School. "What you still haven't seen ... is a [state] commission saying: 'Isn't climate the through line in all of this? Let's examine it in an open-ended way, let's figure out where the information takes us and make some decisions.'"

"Our electric grid was not built to handle the storms that are coming this next century," said Tremaine L. Phillips, a commissioner on the Michigan Public Service Commission, which in August held an emergency meeting to discuss the problem of power failures. "We need to come up with a broader set of metrics in order to better understand the success of future improvements."

The debate is being echoed in states across the nation, where burying power lines has emerged as one of the most common proposals for insulating the grid from high winds, fires and flooding. But opponents have balked at the cost, which can run in the millions of dollars per mile.

In California, for example, Pacific Gas & Electric wants to bury 10,000 miles of power lines, both to make the grid more resilient and to reduce the risk of sparking wildfires. Its power equipment has contributed to multiple deadly wildfires over the past decade, including the 2018 Camp Fire that killed at least 85 people.

The California utility's proposal has drawn scorn from critics, including San Jose Mayor Sam Liccardo, who say it would be too slow and expensive. But Patricia Poppe, the company's CEO, told reporters that doing nothing would cost California even more in lost lives and property.

The plan has yet to be submitted to the state, but Terrie Prosper, a spokeswoman for the California Public Utilities Commission, said the commission has supported underground lines as a wildfire mitigation strategy.

Another oft-floated solution is microgrids, small electrical systems that provide power to a single neighborhood, university or medical center.

Most of the time, they are connected to a larger utility system. But in the event of an outage, microgrids can operate on their own, with the aid of solar energy stored in batteries.

In Florida, regulators recently approved a four-year microgrid pilot project, but the technology remains expensive and unproven. In Maryland, regulators in 2016 rejected a plan to spend about $16 million for two microgrids in Baltimore, in part because the local utility made no attempt to quantify "the tangible benefits to its customer base."

In Texas, where officials have largely abandoned state regulation in favor of the free market, the results have been no more encouraging. Without requirements, as exist elsewhere, for building extra capacity for times of high demand or stress, the state was ill-equipped to handle an abnormal deep freeze in February that knocked out power to 4 million customers for days.

Since then, Berkshire Hathaway Energy and Starwood Energy Group each proposed spending $8 billion to build new power plants to provide backup capacity, with guaranteed returns on the investment of 9 percent, but the Texas legislature has not acted on either plan.

New York is one of the few states where regulators have assessed the risks of climate change and pushed utilities to invest in solutions. After 800,000 New Yorkers lost power for 10 days in 2012 in the wake of Hurricane Sandy, state regulators ordered utility giant Con Edison to evaluate the state's vulnerability to weather events.

The resulting report, which estimated climate risks could cost the company as much as $5.2 billion by 2050, gave ConEd data to inform its investments in storm hardening measures, including new storm walls and submersible equipment in areas at risk of flooding.

"At the end of the day, we do not want New Yorkers to be at the mercy of outdated infrastructure," said Rory M. Christian, who last month was appointed chair of the New York commission.

Information for this article was contributed by Sahana Jayaraman of The Washington Post.