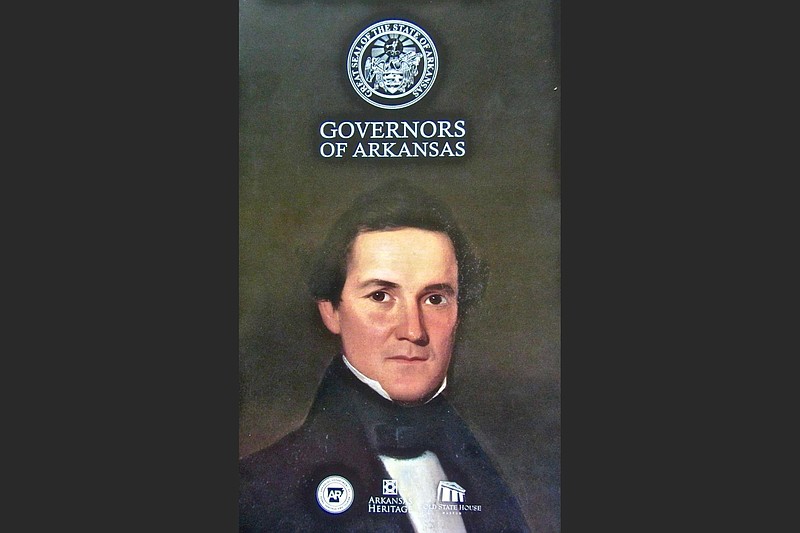 Images of our state's 45 chief executives rotate three faces at a time on a screen at the lively new "Governors of Arkansas" exhibit in the Old State House Museum. Facial hair and neckwear vary as the decades flip by, from James Sevier Conway in 1836 to Asa Hutchinson in 2021.

"Aside from the fact that many of these men worked as attorneys, there is no unique path to the Arkansas governorship," asserts the exhibit's brochure, citing their various endeavors before seeking the office: "a war hero, a rural Ozarks newspaper editor, a transplanted New York multimillionaire businessman, a prosecuting attorney, a veteran state legislator or congressman, or a Southern Baptist minister."

Actually, there is one unique path, briefly mentioned in the brochure: All 45 governors during the state's 185 years have been men. That could change in January 2023 with the Republican early-book favorite Sarah Huckabee Sanders and GOP rival Leslie Rutledge both running to replace Hutchinson.

For now, the new exhibit depicts a man's world, next to the museum's longstanding showcase of gubernatorial first ladies' gowns. If either Sanders or Rutledge becomes governor, it remains to be seen whether the First Ladies gallery will install her husband's inaugural tuxedo.

The museum's stash of gubernatorial memorabilia originated in 1952 when a painting was acquired of Jeff Davis, chief executive from 1901 to 1907. The collection, which has grown to more than 2,000 items, is accessible online.

One strength of "Governors of Arkansas" was noted by Hutchinson while hosting a recent preview reception for former governors and their families. "I think it's important to see the human side as well as the official side," he said.

Attesting to Sidney McMath's bravery as a Marine Corps officer in World War II's Pacific Theater is his dented combat helmet, along with the medals he received. One of the oldest objects shown is the Bible on which Daniel Jones was sworn in as governor in 1897.

Two covers of Time magazine are displayed. The issue of June 25, 1928, depicts former Gov. Joseph T. Robinson when he was running for U.S. vice president on the losing Democratic ticket with Al Smith. Appearing on the Dec. 5, 1966, cover is Gov. Winthrop Rockefeller, along with the headline "A New Day in Arkansas."

There is a definite personal touch to Bill Clinton's running shoes, worn when he was governor seeking the White House in 1992. He is pictured working out with running mate Al Gore outside the Old State House. There's no mention of whether Clinton was jogging to the nearest McDonald's. 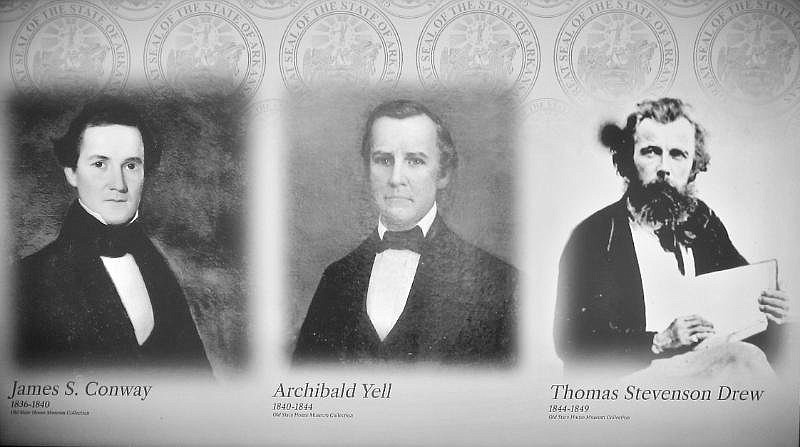 The first three of Arkansas’ 45 governors are pictured in a new exhibit. (Special to the Democrat-Gazette/Marcia Schnedler)

There's whimsy in some of the campaign material. A sticker for Gov. Francis Cherry's failed re-election campaign in 1954 pictures a big red cherry. A "Beebe for Governor" banner shows two smiling bumblebees. A "Democrats for Rockefeller" pin from 1966 depicts the rear end of a symbolic donkey branded with "WR 66."

Cuff links worn by Orval Faubus, whose opposition to Little Rock High School desegregation in 1957 etched his image in history, are shaped like chickens. A pair of Mike Beebe's shoes testify to his campaigning zeal via the holes in their soles. A Mike Huckabee duck call reminds visitors that Arkansas political candidates are well advised to show their zeal for hunting.

One note in the exhibit brochure suggests how much public life can turn: "Historically, Arkansas was a one-party state. The Democratic Party dominated Arkansas politics for many years. As a result, the key in determining the governor's race was a primary election, rather than the general election."

That will be emphatically true next year — except that it is the winner of the Republican primary who will likely be the shoo-in to become the 46th Arkansas governor.